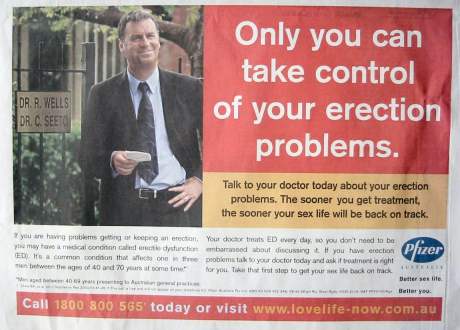 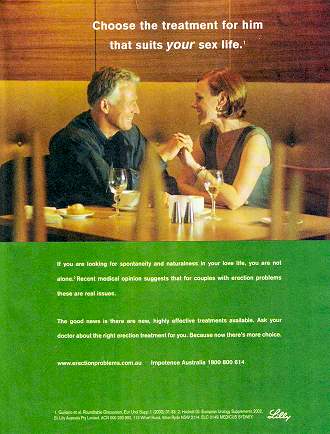 From Max Sutherland’s Weblog: www.sutherlandsurvey.com Erectile Dysfunction and The Da Vinci Code.
---------------------------------------------------------------------------------------------------------------------------Dr. Max Sutherland’s column is published monthly and posted on the web at e an advance copy by email - x Sutherland is
author of the book hed in 8 languages) and is a registered
psychologist. He works as an independent marketing consultant in Australia and USA and is also Adjunct
Professor at Bond University. Contact .
What is the secret of the still number one?
Answer: The bystander effect – the power of ‘persuasion by
proxy’.
Conventional advertisements treat readers and viewers as customers and talk directly to
them. For example, Pfizer’s ‘direct-to-the-consumer’ ads for Viagra are aimed at men
and here’s one urging men to take control of their problem. The message is direct: ‘talk to your doctor’. In contrast, some ads do not talk to the customer directly. The way they work is more subtle. Take a look at the second ad, this time from Lilly, marketers of Cialis, one of the newer drugs taking share from Viagra. Pfizer (Viagra) talks directly to males.
It depicts a man and a woman at a romantic evening and the headline says “Choose the treatment for him that suits your sex life.” It appears to be talking to her - a kind of ‘persuasion by proxy’. But all is not quite as it seems! While the message is ostensibly not directed at him, think about this: Readers of this ad are both male and female. The message to her is ‘overheard’ by male readers. The difference is subtle but important. So the communication is doing double duty by impacting him as well as her. Lilly (Cialis) talks to the female - applying
Moreover, when you overhear something, it pressure to males indirectly.
From Max Sutherland’s Weblog: www.sutherlandsurvey.com can be even more influential than if you’re being told directly. When we overhear information incidentally, as bystanders, we process it differently and often apply less-defensive processing to it. My bout this as ‘vicarious experience and virtual reality’ (Ch7). The effect is to transform this ad from direct ‘hard’ sell (if you’ll pardon the expression) into a ‘pressure’ that is less direct but more effectively applied. Information that is overheard instead of being delivered as a direct message can be quite powerful. But what has this got to do with The Da Vinci Code? They are both ‘communications in camouflage’. Both apply persuasion and information, indirectly. The style is to romanticize rather than proselytize. The plot of the Da Vinci Code tells of a secret society poised to expose the early Christian church in its distortion of the ‘facts’ about Jesus. These ‘historical facts’ are embedded in the plot and further revealed through the dialogue and the interactions that take place between the novel’s characters. The reader looks on from outside the pages - an enthralled bystander. Smear fiction with reality and it can be hard to tell the difference, especially when that information is encountered vicariously by overhearing the dialogue between the characters - in a book (or even a website In contrast to non-fiction books that pitch information directly at the reader, The Da Vinci Code informs while it entertains. (James Michener, the master of the genre did this with books like , etc.) Like the Lilly ad above that pitches information not directly but indirectly, The Da Vinci Code does the same as part of an entertainment experience while the reader is enjoying the novel. When the reader is engaged in an entertainment experience like this, there is not the same motivation to evaluate ‘information’ that there would be with a non-fiction book. With a novel, readers are focused on wanting to read on - to find out what happens next - rather than pausing to evaluate every bit of information they encounter. When the book was published in April 2003, Christian leaders seemed to shrug off the author’s introduction claiming the documents described in the story as accurate - after all it was only a backdrop to a fiction novel. That was, until parishioners began talking about leaving the church because of what they had "learned" in Dan Brown's bestseller. Eventually they were forced firmly onto the defensive with some churches having to run to try to discredit this newfound ‘ knowledge’ that had embedded itself in their parishioners’ minds – namely: • To minimize the influence of women, the early Christian church fabricated that Mary • That she was really the wife of Jesus and bore him children. • That the Catholic church suppressed "the divine feminine" in order to protect its Challenges to religious canons that underpin peoples’ faith, if pitched directly by a non-fiction author, would be automatically met with derision and rejection because the direct From Max Sutherland’s Weblog: www.sutherlandsurvey.com approach galvanizes psychological defense. However, millions read the information in
The Da Vinci Code and millions began to wonder. Because they read it as a novel, they
absorbed the information vicariously in the way that bystanders do…and that is an
important difference.
The Da Vinci Code is a message in masquerade. The viewer is not focused on getting a
message so much as being entertained. Mini-drama commercials (TV or cinema) that
are experienced like plays or movies, work the same.

Counter-arguing:
There is a world of difference in being a bystander and not being the obvious target of a
communication.he intent to persuade is less obvious, the communication can be
more persuasive because it doesn’t engage the same protective defenses.
The more we are in bystander mode the more it reduces the motivation for us to engage
our normal defensive reactions. We have less reason to critically examine what is being
said and less motivation to assess it for validity. Hence when a communication is
experienced this way, it has a better chance of ‘seeping in’.
Now, we can see why other novels of the same ilk as The Da Vinci Code have had such
profound social impact over the years. Think of books like Ayn Rand’s (1943) and (1957). Or, more recently, ‘The
Common to all of them it the use of the ‘bystander’ style.
Conclusion:
Persuasion by proxy works for books as it does for ads - via the bystander technique - a
form of ‘communication in camouflage’.
“Too much zeal offends where indirection works.”

1 “Viagra and the Battle of the Awkward Ads” by Stuart Elliott, New York Times, April 25, 2004
2 Persuasion through overheard communication by life-like agents