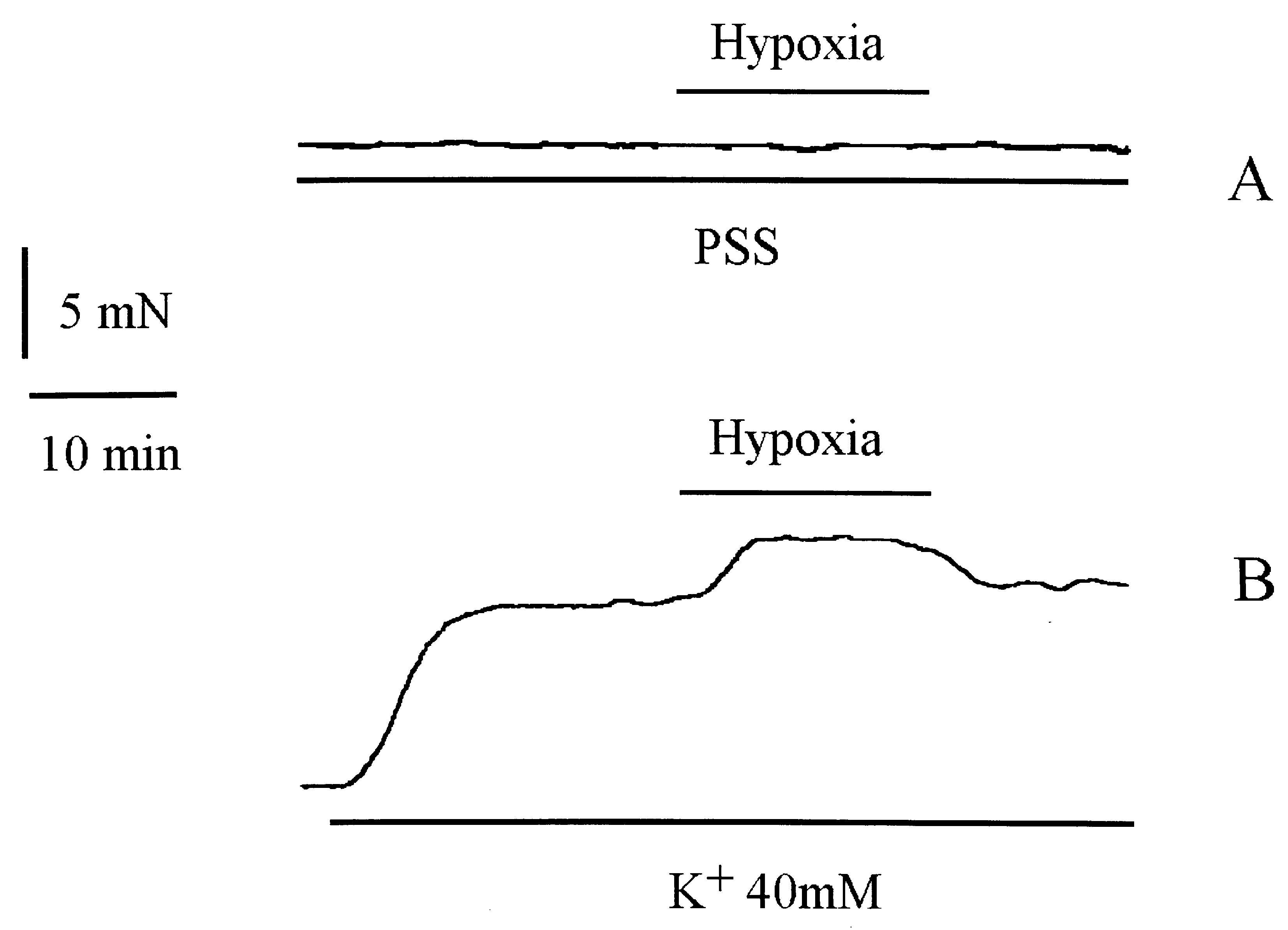 Isometric tension recording of an isolated rabbit coronary artery ring. A: Ring was exposed to hypoxic PSS solution. No effect was observed. B: Ring was pre-contracted with 40 mM K+ solution (K+ 40 mM) before exposure to hypoxia. Hypoxic K+ solution induced anadditonal contraction of about 3 mN.
obtain an optimal reaction to hypoxia, was determined by arginine (L-NMMA, 10-4 M), two inhibitors of NO synthase.
successive 15-min periods of superfusion of normoxic, Hypoxia induced a contraction of 41.3 ± 12.3% (n = 8) hypoxic and normoxic with different high K+ solutions but in the presence of L-NAME, hypoxia induced a relax- obtained by equimolar substitution of NaCl by KCl. In all ation (43.5 ± 6.2% (n = 8)). The L-NAME mediated cases (n = 6) hypoxia induced a further contraction of arte- conversion of an hypoxic contraction into a relaxation was rial rings pre-contracted by 40 mM K+ solution (Fig. 1B). In not reversed by the addition of L-arginine at two concentra- each case the effect of hypoxia was fully reversible and the tions (10-4 and 10-3 M, n = 6 for each) (Fig. 3). The level of contraction induced by high K+ solution post-hypoxia amplitude of the contraction induced by high K+ solution was was the same as that induced by high K+ pre-hypoxia (Fig.
significantly increased by L-NAME (4.9 ± 2.9 mN vs 23 ± 3.6 mN). This increase in high K+ contraction was partially The effect of the endothelium was examined in 6 coro- reversed by L-arginine since the magnitude of the K+ con- nary artery rings where the endothelium had been removed traction returned to 10.2 ± 3.1 mN. Experiments performed mechanically and its absence verified by the failure of ACh with L-NMMA (5 ¥ 10-5 and 10-4 M) modified the hypoxic to induce relaxation (Fig. 2). The magnitude of the high K+ response: upon hypoxia a contraction was observed followed contraction was the same (4.2 ± 2.1 mN vs 4.4 ± 1.9 mN in by a relaxation (Fig. 4). The addition of L-arginine at 10-4 endothelium and endothelium-denuded rings, respectively) and 10-3 M (n = 7) did not reverse the original hypoxic suggesting that our technique to remove the intimal layer pre- response (Fig. 4). The hypoxic contraction decreased from served smooth muscle contraction capabilities. Hypoxia 4.2 ± 1.6 mN to 2.5 ± 0.9 mN (p < 0.05) in the presence of induced a contraction of 34.8 ± 8.3% in rings with endothe- L-NMMA. In the presence of L-NMMA with 10-3 M L- lium but a relaxation of 37 ± 4.3% in rings without endo- arginine the hypoxic contraction of 2.2 ± 0.9 mN was not thelium (Fig. 2). In differents experiments rings were different from the hypoxic contraction observed without L- precontracted by histamine (10-5 M) (in place of high K+ arginine (2.5 ± 0.9 mN). L-NMMA increased the K+- solution) with intact endothelium hypoxia still induced a con- induced contraction (6.1 ± 2.8 mN control, 18.5 ± 6.2 mN traction of 48 ± 7% and a relaxation of 26 ± 5% without with L-NMMA) and this effect was partially reversed by the addition of L-arginine (18.5 ± 6.2 mN to 7.8 ± 4.1 mN) sug-gesting that L-NMMA induced a blockade of the basal NO Role of nitric oxide metabolism
Since NO is known to increase cGMP concentration in The endothelium-dependent hypoxia-induced contraction smooth muscle, we blocked its synthesis with methylene blue has been suggested by Yang and co-workers (1994) to be the (10-5 M), a potent inhibitor of guanylate cyclase. In the pres- result of an inhibition in basal EDRF release. To test this ence of methylene blue the magnitude of the high K+ con- hypothesis, we blocked NO synthesis by Nw-nitro-L-arginine traction did not change (6.8 ± 1 mN in control vs 9.6 ± methyl ester (L-NAME, 10-4 M) and Nw-monomethyl L- 1.3 mN with the drug). Methylene blue changed the hypoxic 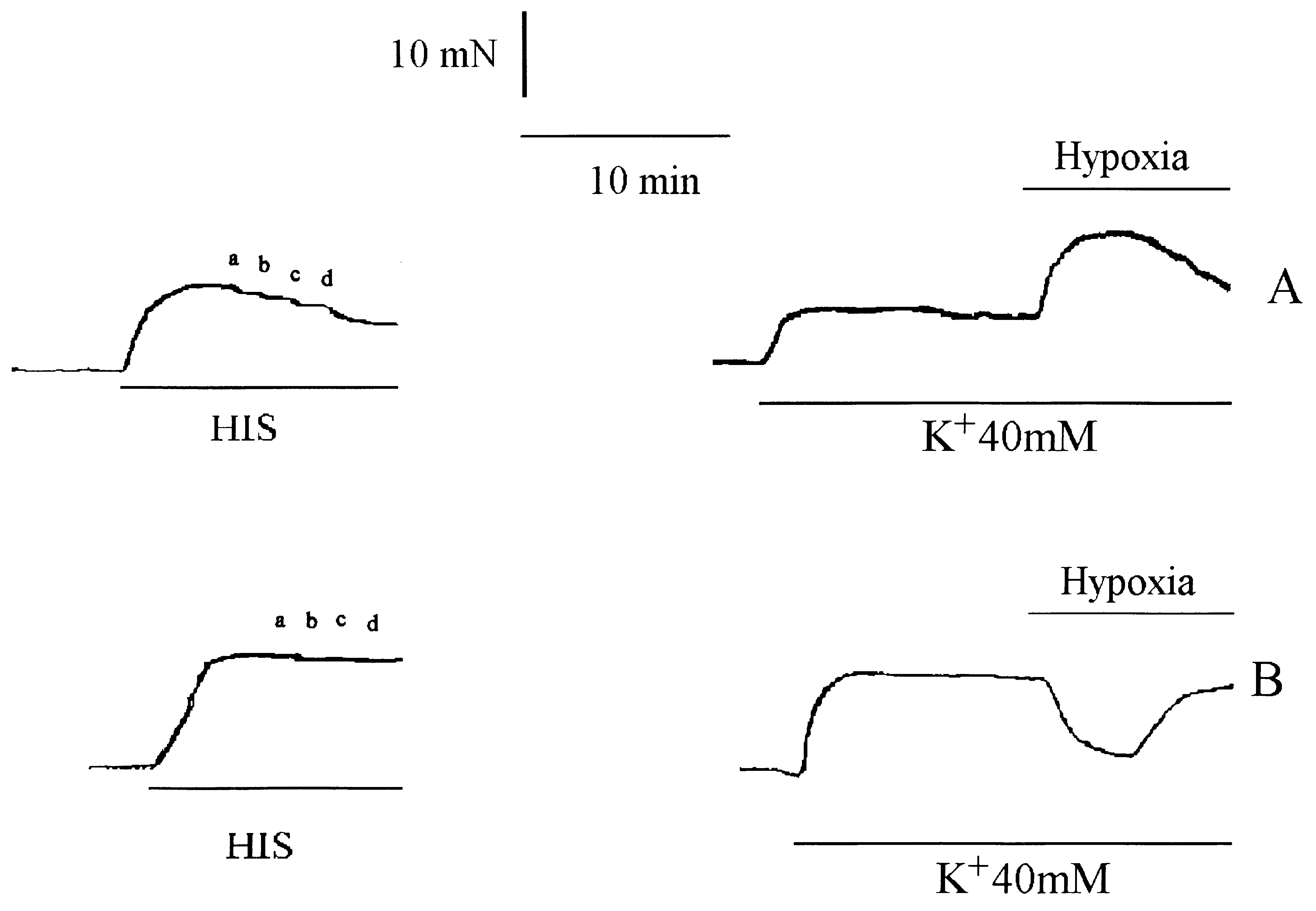 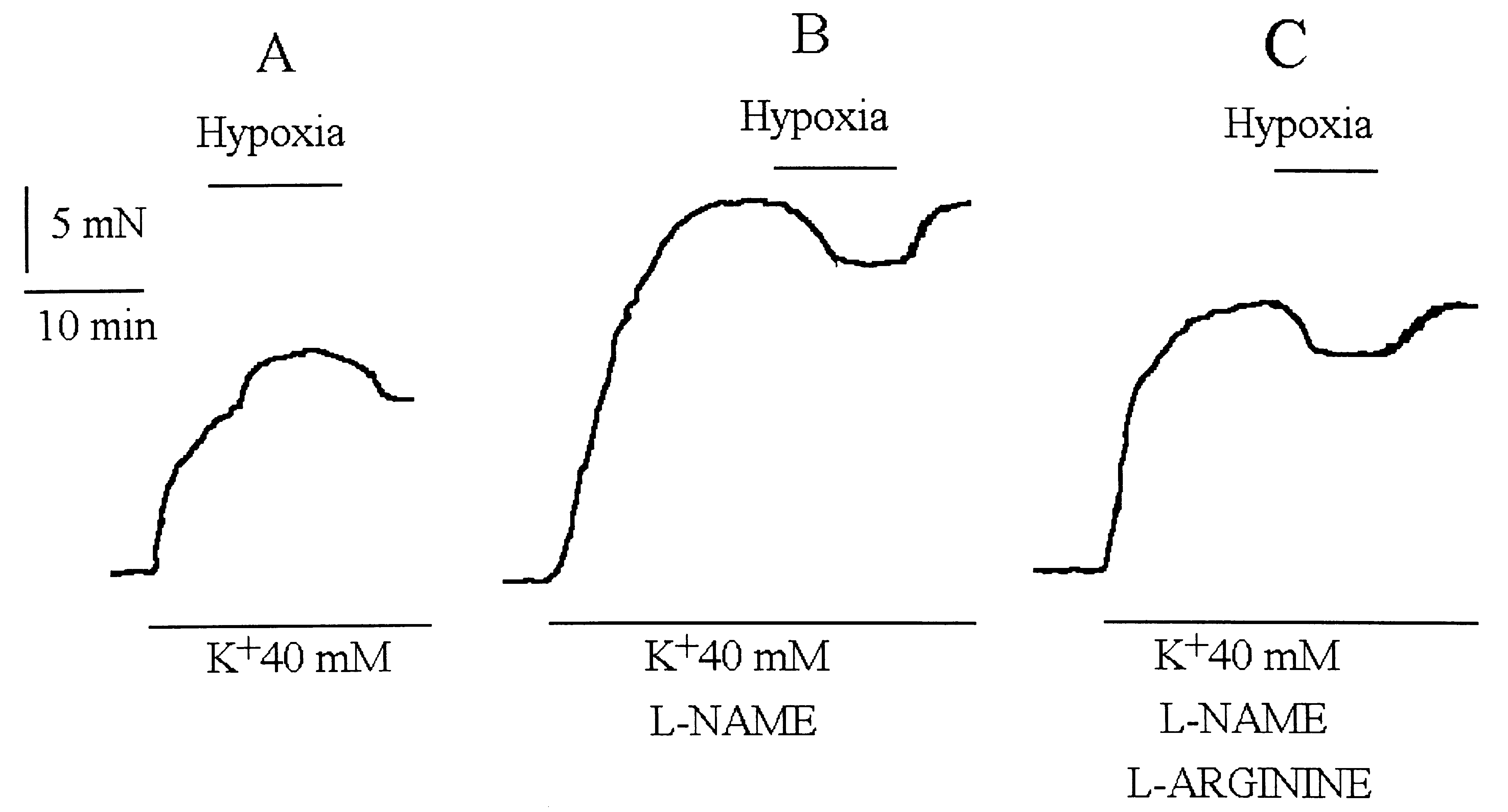 Isometric tension recording of isolated rabbit coronary artery rings with (A) or without (B) endothelium. Rings were pre-contracted with either 10-5 M histamine (HIS) (left panel) or with 40 mM K+ solution (K+ 40 mM) (right panel). The presence of endothelium was testedon these rings by the response to increasing doses (a, b, c, d, respectively 10-7, 10-6, 10-5 and 10-4 M) of acetylcholine (left panel). Hypoxiainduced a contraction if the endothelium was intact (A) and a relaxation in a ring without endothelium (B).
Isometric tension recording of an isolated rabbit coronary artery ring exposed to 40 mM hypoxic K+ solution. A: In control condi- tions, hypoxia induced a contraction. B: In the presence of L-NAME (10-4 M) hypoxia induced a relaxation. C: The addition L-arginine (10-3 M) did not restore the hypoxic contraction.
contraction into a hypoxic relaxation (n = 7) (Table 1). After tion into a hypoxic relaxation without any change in the high washout, the hypoxic contraction was restored. We also K+ contraction (Table 1). We conclude that hypoxic EDCF tested ODQ (10-5 M) which is a more specific blocker of release is dependent on the NO synthase pathway. Contrary guanylate cyclase. ODQ also changed the hypoxic contrac- to NO inhibitors, guanylate cyclase blockers did not enhance 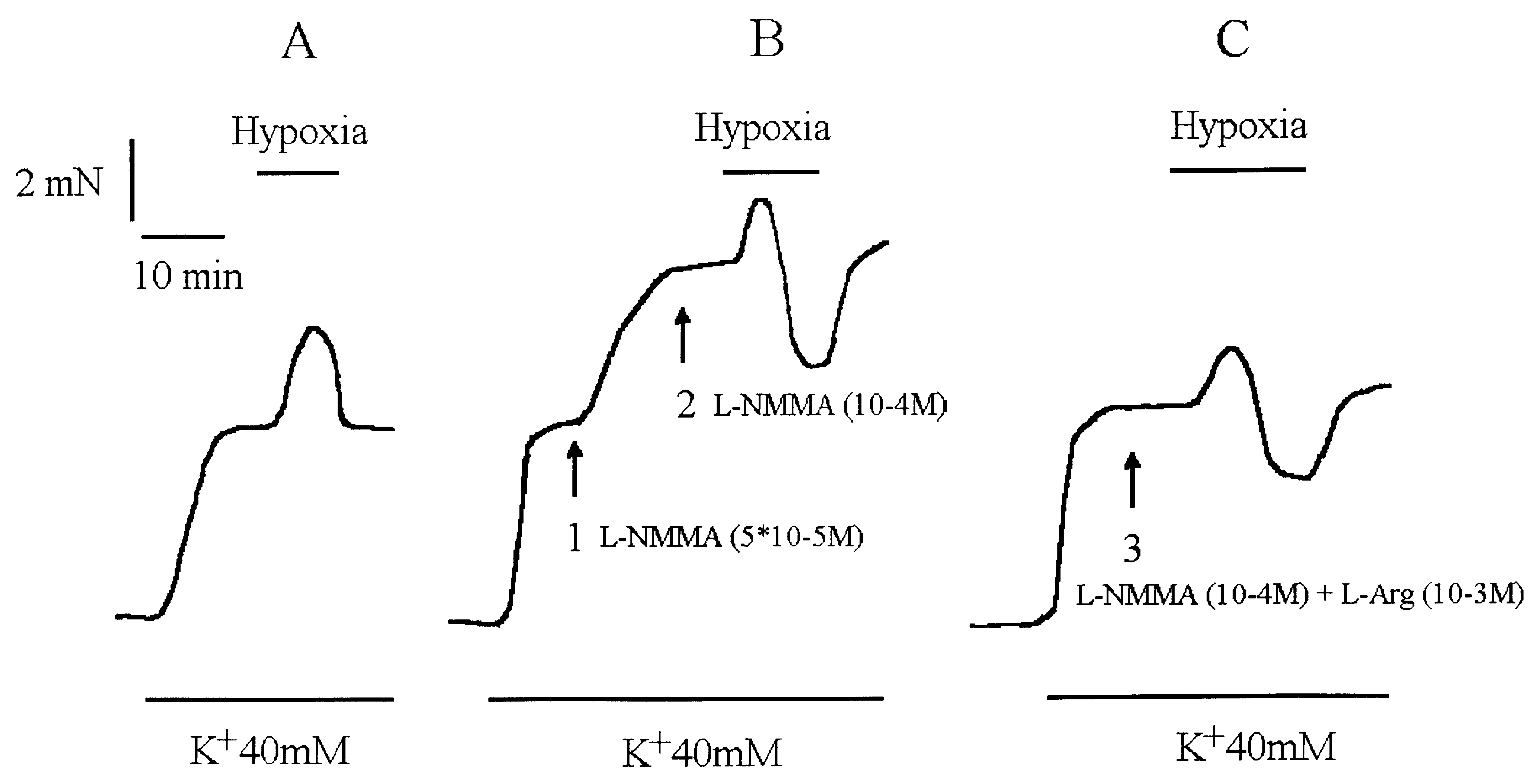