American Journal of Botany 87(5): 748–751. 2000.
DISCOVERY OF DISTYLY IN NARCISSUS
(AMARYLLIDACEAE)1
JUAN ARROYO2 AND SPENCER C. H. BARRETT3,4 2Departamento de Biologı´a Vegetal y Ecologı´a, Universidad de Sevilla, Apartado 1095, E-41080 Sevilla, Spain; and 3Department of Botany, University of Toronto, 25 Willcocks Street, Toronto, Ontario, Canada, M5S 3B2 There has been disagreement concerning the nature of sexual polymorphisms in Narcissus, a genus of insect-pollinated geophytes native to the Mediterranean. The existence of trimorphic heterostyly in the genus has recently been confirmed,but the occurrence of distyly remains enigmatic. All sexually dimorphic species previously investigated possess two distinctstyle lengths but anthers of similar height. Stigma-height dimorphism does not qualify as true distyly because of the absenceof a reciprocal correspondence in stigma and anther position in the floral morphs. Such reciprocal herkogamy is generallyregarded as the defining feature of heterostyly. Here we report on distyly in N. albimarginatus (section Apodanthae), a rarespecies confined to a single mountain in northwestern Morocco. A population composed of equal numbers of long- andshort-styled plants exhibited reciprocal herkogamy with lower anthers of the long-styled morph and upper anthers of theshort-styled morph corresponding in height to stigmas of short- and long-styled plants, respectively. The presence of bothstigma-height dimorphism and distyly in Narcissus is of general significance to theoretical models of the evolution ofheterostyly.
Key words:
Amaryllidaceae; distyly; Lloyd and Webb model; Narcissus; reciprocal herkogamy; stigma-height dimor- Heterostyly has originated independently in at least 28 lesworth (1979) also investigated the stability of stigma- animal-pollinated flowering plant families but the evo- height dimorphism and found that it was difficult to lutionary build-up of the polymorphism is still poorly maintain in populations. Whether stigma-height dimor- understood (Ganders, 1979a; Barrett, 1992). Theoretical phism is an intermediate stage in the evolution of distyly models differ in both the selective mechanisms invoked has remained difficult to assess because of the absence and in the sequence in which the morphological and of comparative data. One source of evidence in favor of physiological components of the syndrome are assembled the Lloyd and Webb (1992a, b) model would be the co- (Charlesworth and Charlesworth, 1979; Lloyd and Webb, occurrence of stigma-height dimorphism and distyly 1992a, b; Richards, 1998). Unfortunately, little compar- ative information is available to evaluate the different Narcissus (Amaryllidaceae) is composed of ϳ40 spe- pathways by which heterostyly has evolved and there cies of insect-pollinated geophytes native to the Mediter- have been few experimental studies that have examined ranean. Populations are either monomorphic, dimorphic, the contrasting predictions of theoretical models (Kohn or trimorphic for style length (Barrett, Lloyd, and Arroyo, and Barrett, 1992; Stone and Thomson, 1994).
1996) with at least a dozen species in three sections of Lloyd and Webb (1992a, b) argued that the first stage the genus (Apodanthae, Jonquillae, and Tazettae) pos- in the evolution of distyly from an approach herkoga- sessing length dimorphism of styles (Dulberger, 1964; mous ancestor involves the establishment of a polymor- Arroyo and Dafni, 1995; Baker, Thompson, and Barrett, phism for stigma height but not anther height. They sug- 2000a, b). All species with stylar dimorphism possess gested that the rarity of stigma-height dimorphism in het- two anther levels within a flower, but these are positioned erostylous groups is because this stage was rapidly passed similarly at the upper portion of the floral tube in both through during selection for complete reciprocal herko- morphs [for example, see Fig. 1 in Dulberger (1964) and gamy. Selection for differentiation in anther height would Baker, Thompson, and Barrett, (2000a)]. Because of the likely increase the proficiency of pollen dispersal between absence of reciprocal herkogamy, dimorphic species of morphs and be strongly selected in populations with only Narcissus should not be considered distylous but instead a dimorphism in stigma height. Charlesworth and Char- are best described as possessing stigma-height dimor-phism (reviewed in Barrett, Jesson, and Baker, 2000). In 1 Manuscript received 19 August 1999; revision accepted 20 January N. triandrus (section Ganymedes) three distinct style The authors thank David Lloyd and Lawrence Harder for valuable morphs commonly occur within populations and accom- ´ n, and J. A. Mejı´as for help in the field; panying the differences in stigma height are three discrete M. Ater (University of Tetouan) for logistic support; Bill Cole for prep- anther levels. Because of the reciprocal nature of stigma aration of the figures; Angela Baker for permission to cite unpublished and anther heights, Barrett et al. (1997) described this data; and research grants from DGESIC Spain (PB95-551, PB98-1144) species as tristylous. In contrast to most heterostylous 4 Author for correspondence (FAX 416-978-5878, e-mail: [email protected] groups, heterostyly is rare in Narcissus whereas stigma- height dimorphism is common, implying that there are 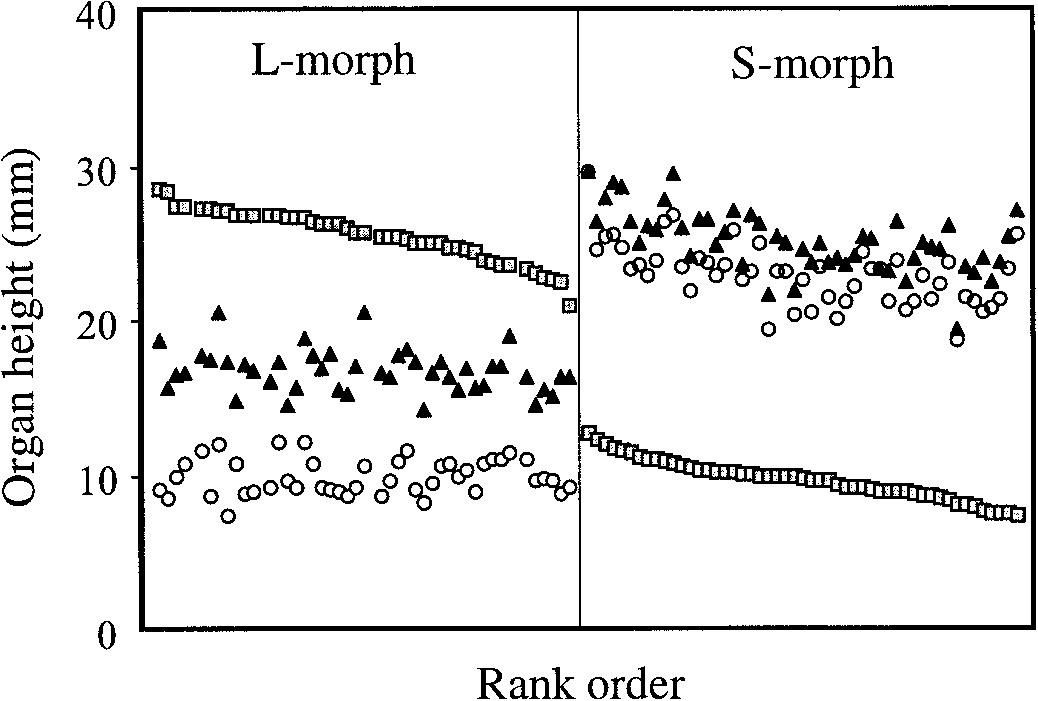 TABLE 1. Mean and (standard deviation) of stigma and anther heights (mm) in the two floral morphs of distylous Narcissus albimargin-atus, a rare species from northwestern Morocco. See text for de-tails.
the nature of floral variation in the population a single flower was sam-pled from all individuals that were in anthesis and flowers were pre-served in 70% ethanol. The sample involved 97 plants, of which 88produced solitary-flowered inflorescences, eight had two flowers, andone had three flowers per inflorescence. Narcissus albimarginatus pos- Distyly in Narcissus albimarginatus. Range of variation in sesses pale-yellow pendulous flowers with a floral tube and a prominent stigma (r) and anther heights (upper-level stamens ᭡, lower-level sta- corona with a white margin. No pollinators were observed visiting the mens ⅜) in a sample of 97 flowers from a population at Jebel Bou- hachem mountain in northwestern Morocco. Note the reciprocal corre-spondence in height of stigmas of the long- and short-styled morphs On return to the laboratory the style length (including stigma) and with the upper- and lower-level stamens of the short- and long-styled height of upper- and lower-level stamens (to anther base) of all flowers morphs, respectively. Flowers are ranked by style length.
were measured using digital calipers to the nearest 0.1 mm. All mea-surements were made from the top of the ovary, and all stamens weremeasured and the average value taken for each stamen level. Data from strong constraints on the evolution of reciprocal herko- N. albimarginatus were then compared with published measurements gamy in populations with stigma-height dimorphism. In of sex-organ variation in seven Narcissus species with stigma-height addition, there is no evidence for the occurrence of dial- dimorphism to assess variation in the degree of reciprocity in stigmasand anthers.
lelic incompatibility or ancillary polymorphisms of pol-len and stigmas in any Narcissus species (Dulberger,1964; Arroyo and Dafni, 1995; Barrett, Lloyd, and Ar- royo, 1996; Sage et al., 1999; Baker, Thompson, and Bar- The population of N. albimarginatus was composed of two discrete floral morphs differing in style length (Fig.
Here we provide quantitative evidence for the exis- 1). The population contained 45 long-styled plants and tence of distyly in a rare species of Narcissus from north- 52 short-styled plants. This ratio does not differ signifi- western Morocco. Narcissus albimarginatus D. & U.
cantly from equality (␹2 ϭ 0.505; P ϭ 0.477). Of partic- Muller-Doblies was first described in 1989 from near the ular interest was the finding that the position of the two summit of the mountain Jebel (as in the original descrip- stamen levels within a flower differed significantly be- tion) Bouhachem (Muller-Doblies and Muller-Doblies, tween the morphs, demonstrating that the population does 1989). The illustrations of N. albimarginatus accompa- not exhibit a simple stigma-height dimorphism (Table 1).
nying the taxonomic description indicate two floral In the long-styled morph the two stamen levels were in- morphs differing in style length and anther position, and cluded within the corona (upper-level stamens) and floral the authors describe the species as ‘‘heterostylic.’’ How- tube (lower-level stamens), whereas in the short-styled ever, population samples were not reported and many au- morph both stamen levels were exserted beyond the co- thors have described Narcissus species as heterostylous rona. Reciprocal herkogamy occurs in N. albimarginatus when in fact the species exhibit stigma-height dimor- because lower-level stamens in the long-styled morph and phism not distyly (e.g., Henriques, 1887; Fernandes, upper-level stamens of the short-styled morph correspond 1964; Webb, 1980; Valde´s, 1987; Richards, 1997; and see in height to stigmas of the short- and long-styled morphs, Barrett, Lloyd, and Arroyo, 1996, for a review). Because respectively (Table 1). Because of this reciprocal corre- of this problem we decided to investigate sex-organ var- spondence in stigma and anther height N. albimarginatus iation in N. albimarginatus further by attempting to lo- cate the population described by D. and U. Muller-Dob- The degree of stigma-anther reciprocity in N. albimar- lies in Morocco and conducting detailed sampling to de- ginatus is much greater than in Narcissus species with termine whether the species was indeed truly distylous.
stigma-height dimorphism (Fig. 2). This is largely be-cause lower-level stamens in the long-styled morph cor- respond more closely in height to stigmas of the short- On 18 April 1999 the Djebel Bouhachem population was located in styled morph, whereas in species with stigma-height di- the Western Rif mountain range of northwestern Morocco. The popu- morphism these stamens are usually positioned higher in lation occurs along a sandstone ridge (not limestone as earlier reported) the floral tube. Interestingly, the mean difference in stig- at 1500 m growing under Cedrus atlantica forest and was composed of ma height between the floral morphs in N. albimarginatus ϳ100 flowering individuals in an approximate area of 200 ϫ 100 m.
is the largest of the eight dimorphic species of Narcissus At the time of the visit the population was past peak flowering, but a illustrated in Fig. 2. Disruptive selection on stigma height sufficient number of flowers was available for sampling. To determine during the evolution of reciprocal herkogamy may have 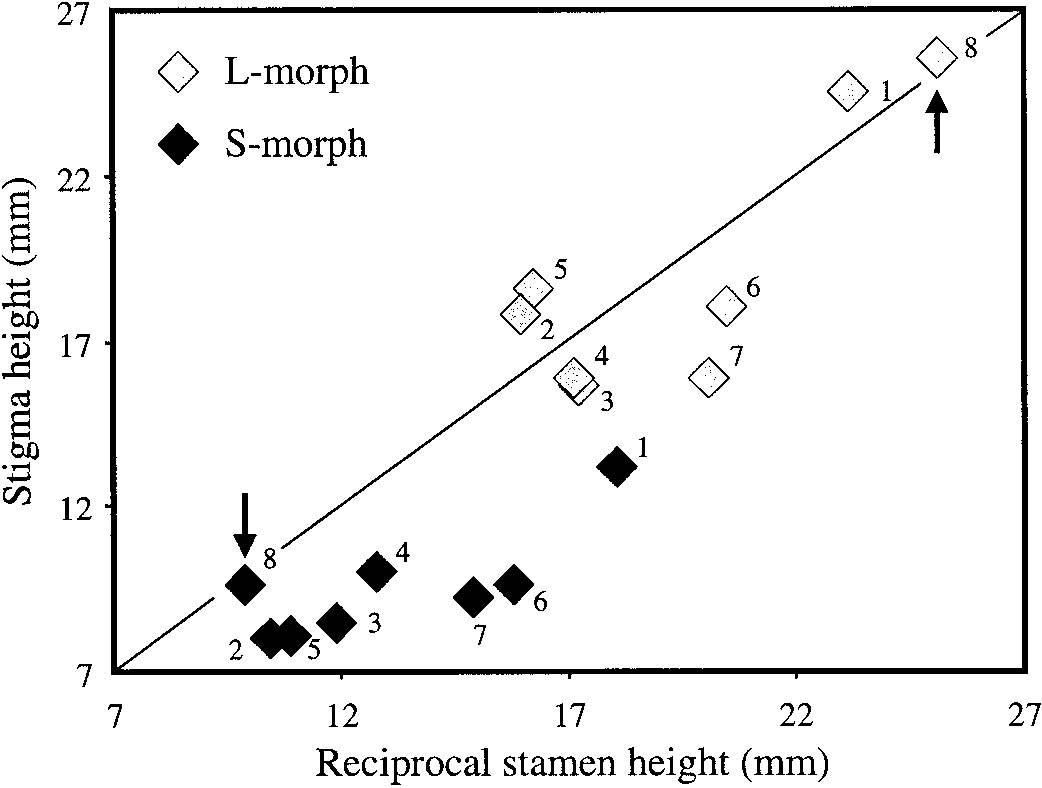