Pll stands for 'phase-locked loop' and is basically a closed loop frequency control system, which functioning is based on the phase sensitive detection of phase difference between the input and output signals of the controlled oscillator (co)

PLL stands for 'Phase-Locked Loop' and is basically a closed loop frequency control
system, which functioning is based on the phase sensitive detection of phase difference between the input and output signals of the controlled oscillator (CO). Fig. 2 shows the classic
The phase detector is a device that compares two input frequencies, generating an output that is a measure of their phase difference (if, for example, they differ in frequency, it gives a periodic output at the difference frequency). If fIN doesn't equal fVCO, the phase-error signal, after being filtered and amplified, causes the VCO frequency to deviate in the direction of fIN . If conditions are right, the VCO will quickly "lock" to fIN maintaining a fixed relationship with the At that point the filtered output of the phase detector is a dc signal, and the control input to the VCO is a measure of the input frequency, with obvious applications to tone decoding (used in digital transmission over telephone lines) and FM detection. The VCO output is a locally generated frequency equal to fIN , thus providing a clean replica of fIN, which may itself be noisy. Since the VCO output can be a triangle wave, sine wave, or whatever, this provides a nice method of generating a sine wave, say, locked to a train of pulses. In one of the most common applications of PLLs, a modulo-n counter is hooked between the VCO output and the phase detector, thus generating a multiple of the input reference frequency fIN. This is an ideal method for generating clocking pulses at a multiple of the power-line frequency for integrating A/D converters (dual-slope, charge-balancing), in order to have infinite rejection of interference at the power-line frequency and its harmonics. It also provides the basic technique of frequency 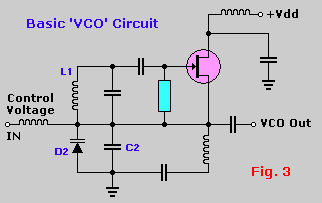 A basic Voltage Controlled Oscillator (VCO) can be seen in Fig. 3. It shows a basic
voltage controlled oscillator by which frequency of oscillation is determined by L1, C2, and D2. D2 is a so-called varactor or varicap. Most common diodes will behave as a varicap when reversed biased, but they must be operated below the junction breakdown parameters. With reverse bias, this diode will act as a capacitor, its depletion zone forming the dielectric properties. Changing the amount of reverse bias within the diode's breakdown limits, will alter the depletion zone width and hence vary the effective capacitance presented by the diode. This in turn changes the frequency resonancy of the oscillator circuit. But how does this help us? After all, the VCO is not stable. Any slight voltage variation in the circuit will cause a shift in frequency. If there was some way we could combine the flexibility of the VCO with the stability of the crystal oscillator, we would have the ideal frequency synthesis system. What if we feed the output of a VCO and Crystal Oscillator into a phase detector? What
is a Phase Detector? (See Fig. 4). It is similar to a discriminator or ratio detector used in frequency demodulation or it could be a digital device, like an 'Exclusive OR' gate. If two signals are fed into a phase detector, being equal in phase and frequency, there will be no output from the detector. However, if these signals are not in phase and frequency, the difference is converted to a DC output signal. The greater the frequency/phase difference in the two signals, the larger the output voltage. Look at Fig. 4. The VCO and Crystal Oscillator outputs are
combined with a phase detector and any difference will result in a DC voltage output. Suppose

crystal oscillator frequency. This phenomena is referred to as Phase Locked Loop in its most basic form. Only part of the VCO output needs to be sent to the phase detector. The rest can be But hold on a minute, the VCO is locked onto the crystal oscillator and is therefore behaving as if it were a fixed frequency oscillator. This gives us the stability of a crystal oscillator, but lost the flexibility we were aiming for. We may just as well use the crystal oscillator alone for all the good this arrangement has done to us. It certainly doesn't appear as if Let's investigate how we can solve this problem. Suppose our crystal frequency was 10 MHz, but we wanted the VCO to operate on 20 MHz. The phase detector will of course detect a frequency difference and pull the VCO down to 10 MHz, but what if we could fool the phase detector into thinking the VCO was really only operating on 10 MHz, when in reality it is operating on 20 MHz. Take a look at Fig. 5. Suppose, for example in Fig. 4 we used a divide-by-
four instead of the divide-by-two. Then, at LOCK, the VCO would be oscillating at 40 MHz yet still be as stable as the crystal reference frequency. There are oscillators that will operate over a large range of frequencies. Variable
Frequency Oscillators (VFO) are made to change frequency by changing the value of one of the frequency determining circuits. A VCI is one in which this component is made to change PLL Components
Phase Detector: Let's have a look at the basic phase detector. There are actually two basic types, sometimes referred to as Type I, and Type II. The Type I phase detector is designed to be driven by analog signals or digital square-wave signals, whereas the Type II phase detector is driven by digital transitions (edges). They are typified by the most common used 565 (linear Type I) and the CMOS 4046, which contains both Type I and Type II. The simplest phase detector is the 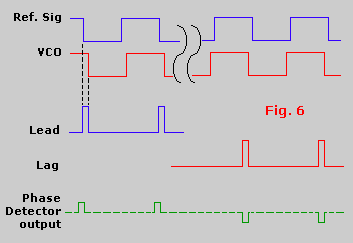 Type I (digital), which is simply an Exclusive-OR gate (see Fig. 5a.). With low-pass filtering, the graph of the
output voltage versus phase difference is as shown, for input square-waves of 50% duty-cycle. The Type I (linear) phase detector has similar output-voltage-versus- phase characteristics, although its internal circuitry is actually a "four-quadrant multiplier", also known as a "balanced mixer". Highly linear phase detectors of this type are essential for lock-in detection, which is a fine technique. Todays engineers face constant challenges in the design of PLL circuits because of the
level of phase noise and the fundamental property of noise floor signals, especially in the design of radio and wireless networks. More recently, switching speed of PLL's have become a critical parameter in todays design of synthesizers, and especially for our modern networks such as 3G, WLANs, WCDMA, and Bluetooth technology. The switching speed is emerging as a challenging requirement for single loop, single chip PLL designs. Speed is mainly a function of loop bandwidth, but in many cases the loop band width cannot be too wide because of phase noise considerations. Speed-up techniques have been devised to improve PLL transient time, but most of them have limited efficiency. In addition, speed-up techniques will have to be improved. For the WCDMA and 3G markets (and others emerging) a reasonable goal is 100 to 150mS for a dF=60Mhz excursion and a convergence to df=250Hz. One solution the industry will probably adopt in the future is the use of highly complex Sigma Delta fractional PLL architectures, which allow a high reference frequency and wide loop bandwidth, while maintaining resolution and a good phase noise profile (low division). This technique is already being implemented today. The type II phase detector is sensitive
only to the relative timing of edges shown in Fig. 6.. The phase comparator
circuit generates either lead or lag output output transitions occur before or after the respectively. The width of these pulses is equal to the time between the respective edges. The output circuitry then either sinks or sources current (respectively) during those pulses and is otherwise open-circuited, generating an average

like that in Fig. 7. This is completely
input signals, unlike the situation with earlier. Another nice feature of this phase detector is the fact that the output pulses disappear entirely when the two signals are in lock. This means that there is no "ripple" present at the output to generate periodic phase modulation in the loop, as there is with the type I phase detector. Also, there is an additional difference between the The type I detector is always generating an output wave, which must then be filtered by the loop filter. Thus, in a PLL with type I phase detector, the loop filter acts as a low-pass filter, smoothing this full-swing logic-output signal. There will always be residual ripple, and consequent periodic phase variations, in such a loop. In circuits where phase-locked loops are used for frequency multiplication or synthesis, this adds "phase-modulation sidebands" to the By contrast, the type II phase detector generates output pulses only when there is a phase error between the reference and the VCO signal. Since the phase detector output otherwise looks like an open circuit, the loop filter capacitor then acts as a voltage-storage device, holding the voltage that gives the right VCO frequency. If the reference signal moves away in frequency, the phase detector generates a train of short pulses, charging (or discharging) the capacitor to the new voltage needed to put the VCO back into lock. The second-order PLL, serves as the basis for all PLL synthesizer designs and technology. Most PLL designs, especially for synthesizers where third and fourth order loops are common, use a different terminology, and deal mainly with the open loop gain and phase. To see an example of a working PLL doing its job, check out the circuit below of Fig. 8.
This schematic diagram shows a so-called SCA adapter. The abbreviation "SCA" stands for Subsidiary Communications Authorization. It is used for 'hidden' messages, music, etc. on a
normal hidden section of the FM band. It is based on a 67-KHz subcarrier that is placed on a station's main FM carrier. It is even possible to have multiple subcarriers, some carrying digital data, audio, data encryption, coded messages, and more. Subcarrier transmissions have no effect on standard FM mono and stereo bands and are fully compatible with all existing radios. This circuit can be hooked up to most fm tuners with a minimum of fuss. Low in cost, it uses just a few readily available IC's. The use of a Printed Circuit Board for this design is recommended. 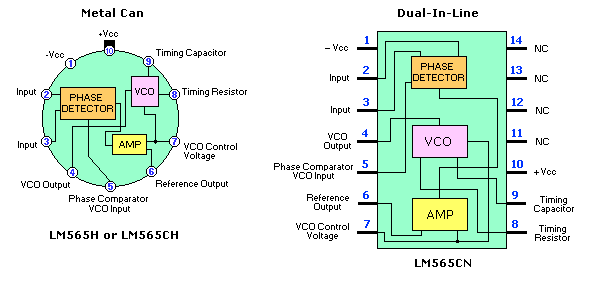 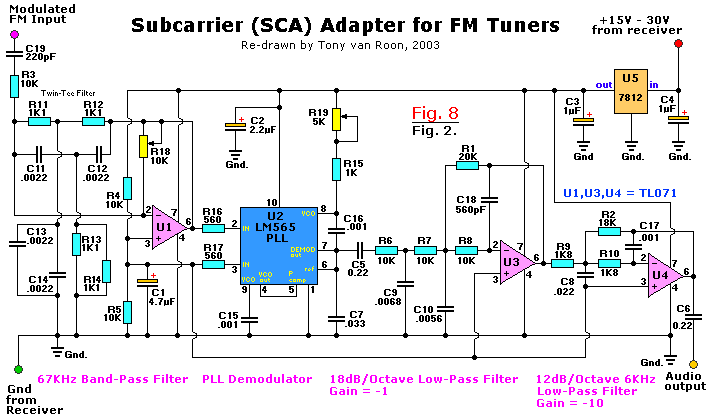 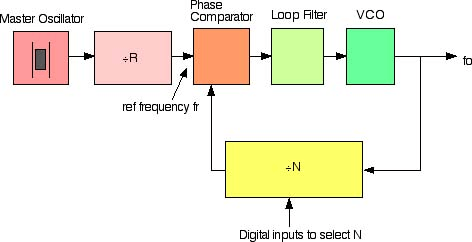