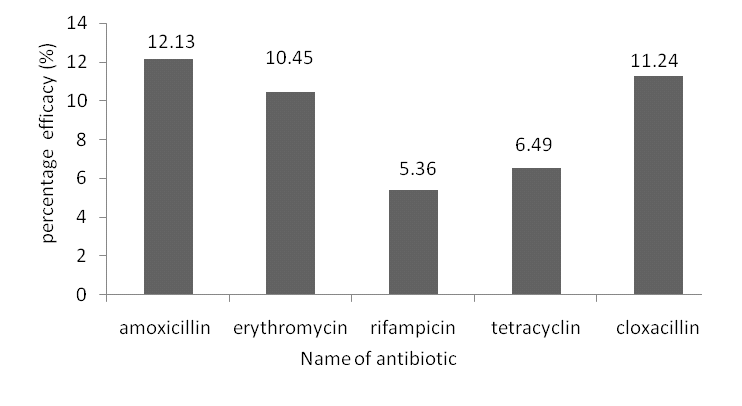 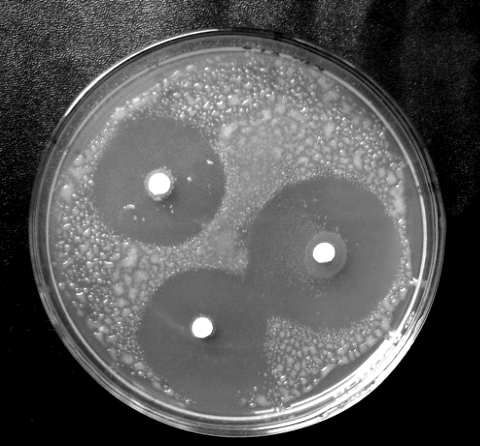 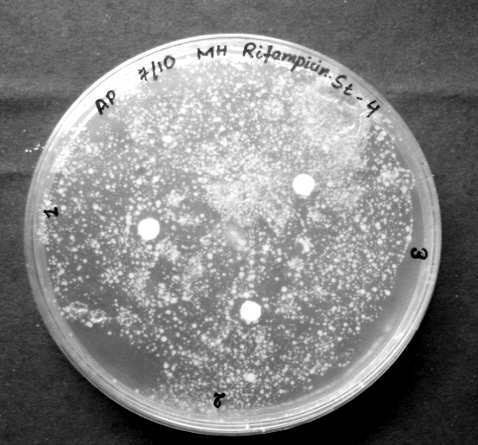 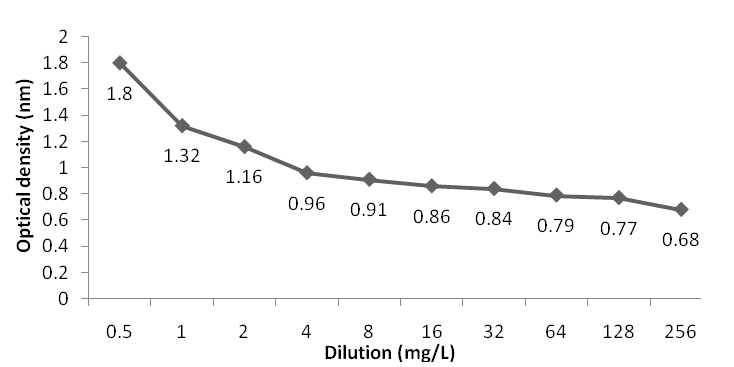 Ankita Shrestha et al. / IRIS – Journal for Young Scientists, 2011, pp. 58-65 (ii) Visual MIC following agitation (VS)
Fig 1 and 2 show that incidence of resistance In order to assess alternative methods for the to the antibiotics was quite high as the maximum determination of MIC endpoints, the MIC for each susceptibility obtained was only about 14.31%, drug-organism pair was read visually following Rifampicin and tetracycline being the most ineffec- agitation of the microdilution trays. Agitation was tive in-vitro. Amoxicillin and Cloxacillin were the most accomplished by first sealing the tops of the trays effective in phase I exhibiting 12.13% and 11.24% with clear tape and then shaking gently until a efficacy respectively, while Ampicillin + Cloxacillin homogeneous suspension was obtained in each was the most effective combination in phase II ex- well. The MIC endpoints for the agitated trays (VS) hibiting 14.31% efficacy. Fig 3 shows the inhibition were defined exactly as described above for the Results and Discussion :
A total of 12 isolates were obtained from 10 raw milk samples. Out of the 12 isolates obtained,nine were identified as Staphylococcus species.
Out of nine, two isolates were coagulase positiveand 7 coagulase negative. Also, five were hemolyticand four non hemolytic. The isolates were examined Fig 3: Results of AST: Susceptibility to Amoxicillin
for their susceptibilities by Bauer Kirby Disc (left) and resistance to Rifampicin (right)
Diffusion test. The susceptibility patterns exhibitedby the isolates and the efficacy of the antibiotics Method I - Agar Dilution Method
antibiotics were recorded between 0.5-1.0 mg/L.
The MIC values were found to be slightly greater than those which have been evaluated in the Method II – Broth Dilution Method
For Broth Macrodilution the following optical Fig 1: Percentage efficacy of antibiotics in AST phase I
Fig 4: Optical density for Amoxicillin + Cloxacillin
Fig 2: Percentage efficacy of antibiotics in AST
by MIC Broth macrodilution method

Antibiotic susceptibility and determination of Minimum Inhibitory Concentration (MIC) of potent antibiotics used againstStaphylococcus spp. isolated from raw milk In the Broth dilution method, the optical density through the acquisition of mobile drug resistance showed a steep decrease even after a single doubling of dilution from 0.5 to 1.0 mg/L. This has Results obtained from the Bauer Kirby Disc been illustrated taking the example of the Diffusion test or the AST showed that Rifampicin combination Amoxicillin + Cloxacillin which yielded and Tetracycline were most ineffective while Amoxicillin, Cloxacillin and a combination of For broth microdilution the end point readings Ampicillin + Cloxacillin was most effective with were recorded and the numerical scores were 12.13%, 11.24% and 14.31% efficacy, respectively.
assigned according to the NCCLS guidelines (Table Results of MIC determination and a statistical and 2). Results obtained from both V and VS methods comparative analysis of the data obtained showed were in accordance with those of NCCLS 2000 as that Amoxicillin in pure form and even when present in combination with Erythromycin and Clavulanate may be the most effective antibiotics against susceptibility patterns. However, changes for certain combinations could not be traced and hence, further evaluations are needed before clinical trials. The methods used were practical Fig 5: Comparative results of MIC for Amoxicillin +
Cloxacillin: V (MIC) and VS (MIC after agetation)
for a clinical laboratory that chooses to perform endpoint readings
bactericidal activity testing assuring a high level of reproducibility between duplicate assays.
Conclusion :
Acknowledgement :
The present study pointed out that the milk We are grateful to Dr. Sister Doris D'Souza samples were contaminated with Staphylococcus A.C., Principal, Patna Women's College (PWC) spp. probably due to the ineffectiveness of and the Research Committee for providing facilities antibiotics used for clinical purposes. It can be said and financial support. We thank Prof. S. Bedi, Head, that using antibiotics to declare “all-out war” against Department of Industrial Microbiology, PWC, for bacteria like Staphylococcus spp. is a war that we taking keen interest in our research work.
cannot win. Moreover, the indiscriminate use of References :
antibiotics at high concentrations in dairy farms Andrews Jennifer M. (2006), ‘Determination of allows significant amounts of antibiotics to enter Minimum Inhibitory Concentrations’.
the human body through the consumed milk, Department of Microbiology, City Hospital besides Staphylococcal enterotoxins which are NHS Trust, Birmingham B 18 7QH 2006.
resistant even to pasteurization. Antibiotic resistant Staphylococci are of great concern both in Aneja K.R. (2004). Experiment in Microbiology, veterinary and human medicine worldwide. Like Plant Pathology and Biotechnology. Fourth Ed.
other bacterial pathogens many Staphylococcus New Age International Publishers. Identification spp. have become resistant to many antimicrobials of common bacteria: Cultural and Biochemical Ankita Shrestha et al. / IRIS – Journal for Young Scientists, 2011, pp. 58–65 Barry, A. L., John C. Sherris, Richard O’Toole and Isenberg, H. D. (1988). Antimicrobial susceptibility W. Lawrence Drew (1992). Reliability of the testing: a critical evaluation. J. Antimicrob.
detecting Methicillin resistant strains of Staphylococcus aureus. Applied Microbiology James, P. A. (1990). Comparison of four methods Devriese, L.A., Haesebrouck, F., Hommez, H. and penicillin for viridans streptococci and the Vandermeersch, R. (1997). “A 25-year survey implications for penicillin tolerance. J.
Staphylococcus aureus from bovine mastitis Antimicrob. Chemother. 25:209–216.
Peterson, L. R., and Shanholtzer. (1992). Tests for penicillinase”, Vlaams Diergeneeskundig bactericidal effects of antimicrobial agents: technical performance and clinical relevance.
Dubey, R.C. and D.K. Maheshwari (2006).
Differential Test of staphylococci through growth on agar plate. Practical Microbiology.
Frazier, C. and Dennis C. Westhoff (2008).
Contamination, Preservation and Spoilage of milk. Food Microbiology. Fourth Ed. 18: 276 –

Daepp and Gorkin, Solutions to Reading, Wrting, and Proving, Chapter 20Reading, Writing, and Proving (Second Edition)A Note to Student Users. Check with your instructor before using these solutions. If you are expectedto work without any help, do not use them. If your instructor allows you to find help here, then we giveyou permission to use our solutions provided you credit us properly. If you