EXPLOSIVES
Brief Introduction to Explosives
An explosive can be solid, liquid or a mixture of substances. When a suitable stimulus, (e.g. electric, flame, spark, percussion) is applied to the explosive substance it is capable of developing a sudden high pressure by the rapid formation or liberation of stable gases at high temperatures. A short history An English monk and scientist, Roger Bacon discovered the formulation for black powder, a secret from ancient China for weapons and became known as gunpowder by some users. Black powder was first used during the 13th century. 1600 – Black powder was first used by the German and Hungarian mines by placement in rock fissures and joints 1689 – Black powder was introduced to Cornish tin mines where paper cartridges were used to package the black powder. 1831 – William Bickford introduced “miner’s safety fuse” which made the use of black powder explosive charges safer to initiate. 1866 – Alfred Nobel introduced dynamite, a combination of nitroglycerine and Kiselghur. (diatomaceous earth) which absorbs three-four times its own weight of nitroglycerine. 1885 – Smith produced delay detonators 1950s – Ammonium nitrate was combined with various combustible and began to replace some quantities of nitro-glycerin based explosives in open cast mines. Making Explosives
Factory made explosives are usually manufactured by a batch process. Blasting problems may be the result of faulty explosives provided by the manufacturer, however most problems are due to poor rotation of explosives (i.e. storing for too long). The manufacturers of explosives ensure that their products have a date of manufacture painted on the cases and packages just for effective stock rotation in the magazine. For example some shelf lives are follows:
Low Explosives
A low explosive is generally defined as one which does not
require a detonator to initiate it. This type of explosive is
normally set off by a flame, heat, or a spark which is
provided by the spit of a safety fuse, a wick or an electric fusehead Black powder or gun powder is classified as a low explosive and it is a mechanical mixture of ingredients (do not combine chemically to form a new compound) where none of the ingredients is an explosive in itself. It is a mixture of charcoal, sulphur and potassium nitrate. Black powder does not produce shock wave but burn rapidly producing large quantity of gas. A simplified reaction is as follows: 2KNO3 + S + 3C K2S + N2 + 3CO2 potassium sulhur

High explosives detonate at velocities which vary between
4,000 and 7,500 m/s depending on their composition,
densities, degree of confinement, diameter etc.
They produce large volume of gas with the reaction being exothermic and consequently the temperatures of detonation are extremely high. These explosives require a shock wave to initiate them and this is provided by a detonator. When confined in a drill hole, the explosive on detonation produces extremely high pressure gases which impart energy in the form of shock and heave into the surrounding rock. The performance of a high explosive depends upon the volume and temperature of the gases produced and on the velocity of detonation (VOD). Many of the high explosives developed in the 19th century contained nitroglycerine, nitrocellulose and later trinitrotoluene (TNT). The development of blasting agents in the 1950s has led to a big reduction of the use nitroglycerine as a component in high explosives. The main constituent of blasting agents is ammonium nitrate which is not an explosive in itself. Type of Explosives

a. Gelignites
An explosives that is based on nitroglycerine (NG), are
manufactured in gelatinous or semigelatinous form.
For underground coal mine, a “permitted” or “permissible”
type of explosives, so as to be safe from coal dust or
methane gas explosion. This is achieved by adding sodium
chloride (15% to 40%).
Because of their relatively high cost and stricter safety
requirements, the use of gelignites in the mining industry is decreasing. b. Ammonium nitrate – Fuel Oil (ANFO) Neither ammonium nitrate nor fuel oil is classified as explosive, but when mixed in correct proportion, the result is an effective blasting agent. 3NH2NO3 + CH2 3N2 + 7H2O + CO2 (3900 kJ/kg) (Ideal – 94.3% AN: 5.7% FO) ANFO cannot be detonated by a detonator. It needs a primer i.e. a high explosive with a detonator. c. Watergels This group of explosives is sometimes referred to as slurries. Watergels were developed to overcome the deficiencies of ANFO in wet conditions. They consists of a mixture of: ii. ammonium nitrate, and sometimes iii. aluminium powder Fine droplets of oxidizer salts such as ammonium, sodium or calcium nitrates are finely dispersed into the continuous phase of fuel oil. This water-in-oil emulsion is then stabilized against liquid separation by an emulsifying agent such as sodium oleate or sodium mono-oleate. Dispersed gas can be put into the emulsion matrix for density control within a range of 0.70 to 1.35 g/cm3. This is achieved with microballoons or by chemical gassing of the composition. Other salts such as perchlorates are added to improve sensitivity and shelf life. The emulsions explosive have excellent water resistance. Heavy ANFO – mixtures of ANFO and high density non-
explosives emulsion phase.
Veolocities of Detonation

The VOD ranges for the four main groups of explosives are:
Characteristics of Explosives
This is the ability of an explosive to remain chemically unchanged when stored. The shelf life of explosives varies from a few hours to a few years depending on the composition, and is stated in the manufacturer’s specification. Chemical decomposition can occur during prolonged storage of explosives, particularly in humid and hot conditions. If decomposition occurs, the explosive eventually becomes either insensitive to detonation, or more sensitive and unsafe to use. The density of most commercial explosives is in the range of 0.8 g/cm3 to 1.6 g/cm3. The optimum density range for the four common types of explosives are: For NG-based explosives, high density indicates high energy concentration. VOD is the rate at which the detonation wave passes through the explosive charge, and with most explosives it falls in the range of 2500 m/s to 5500 m/s. The VOD of an explosive can be determined indirectly by the Dautriche test. Higher VOD are required for satisfactory fragmentation The strength of an explosive is usually considered to be its ability to do useful work. Various strength that are measured: i. Weight strength is the strength of a given weight of an explosive compared with the strength of the same weight of ANFO ii. Bulk strength is the strength of a given volume of the explosive compared with the strength of the same volume of blasting gelatine. The sensitivity of an explosive describes the ease with Sensitivity is most important when allowance is made for safety in handling and use of explosives. It must be insensitive to shock or heat; as safe as possible to manufacture, handle and place in position yet sensitive enough (when directly initiated) to explode when required. Toxic gases such as carbon monoxide and oxides of nitrogen are produced by the detonation of all explosives The ability of an explosive to resist water and to maintain its explosive properties in the presence of water can be described as excellent, good fair or poor. Initiation Systems

Explosives will detonate when subjected to:
In an effort to make explosives reasonably safe to store, transport and use their sensitivity to shock, friction, impact and heat has been reduced, so that only an initiator can detonate an explosive. Some form of initiation systems are needed. These are: safety fuse and plain detonators (capped fuse) A plain detonator consists of an aluminium tube 42 mm long and 6.4 mm in diameter which contains an explosive charge pressed in the bottom of the tube. Safety fuse consists of a centre cotton surrounded by a train of specially prepared gun powder enclosed in layers of jute yarn and waterproofing materials. One end of the safety fuse is fitted to the detonator and crimped with a crimper (made of non-ferrous material). Safety fuse burns at a rate of 120 seconds per metre. Detonating Cord Safety fuse burns but detonating cord detonates. It detonates at a rate of 7000 m/s. A detonating cord is carrier of detonating wave which is used to detonate the primer. The core loadings is made of PETN and range from 5 to 10 g/m length of cord. In Malaysia the type available in the market are the 10g/m, 20g/m, 30g/m and 40g/m of PETN. The detonating cord can be initiated by a detonator. There are many uses of detonating cord including production blasting to fire main shots, presplitting, smooth blasting, seismic exploration, cutting tree limbs and old pier piles. Electric detonators It looks the same as the plain detonators but the only difference is the two leg wires attached to the detonators. Most of the detonators has the resistance of 1 to 2 ohms and the current needed to detonate the detonators is 1.5 amperes. There are two types of electric detonators which are the instantaneous type and the delay type. The instantaneous will detonate at zero second upon initiation. The delay detonators are manufactured in the same way as the instantaneous but the only difference is the presence of a delay element. Electric delay detonators series are: The range of delays available is 1 to 12 giving a total of 12 detonators in series, where a half second interval between each delay These detonators complemented the permitted explosives and are specially designed for use n coal mines. Electronic detonators are the latest innovation. The detonators can be programmed accurately with a delay between 0 ms to 800 ms with an interval of 1 ms. The invention of a shock tube or signal tube is basically a modern version of safety fuse, where a flame can travel through the center of the tube. The tube is made of plastic with 3mm OD and 2mm ID. An explosive powder called HMX covered the inside surface of the tube. The powder detonates at a velocity of about 2000 m/s and this sends a detonating wave to the detonator. The plastic tube is not destroyed after detonation of the explosive powder. The tube can only be initiated by a detonator or by a nonel exploder. Its usage is more appropriate in areas where electric detonators are not advisable to be used. Besides the initiating system, other accessories are needed to make a blasting round to work properly and safely. These are
the following
Relay connectors

Relay connectors are blasting delay elements primarily for
use in surface mining and quarrying operations. There are
two main types:
detonating relay connectors (DRC) Nonel trunkline delays (TLD) A DRC consists of two delay detonators, of from 5 millisecond (ms) to 60 ms duration. The complete unit is in the shape of a sealed plastic dog bone. The DRC is inserted at an appropriate A TLD unit consists of a plastic “bunch block” connector which houses a Nonel delay detonator attached to a length of signal tube. The delay periods vary, depending on the particular manufacturer’s product. The relay type of each TLD, which functions unidirectionally, ensures true hole-by-hole initiation with correct sequencing. Circuit Testers

When using electrical initiating system it is necessary to test the continuity of each detonator, the shotfiring cable, and the resistance of the entire blasting circuit. This is done with an approved circuit tester or a blasting galvanometer, an instrument that applies a very low and safe For example one such circuit tester can deliver a maximum current of 50 mA from the battery assembly when short circuited. This amount of current is far below that required to fire one detonator. Such testing is always carried out from a place of safety. Exploders

Exploders or blasting machines are used in the electrical initiation system. These are available depending on the number of electric detonators in the circuit. The common range is for 1, 12, 25 30 and 100 detonators. Some exploders are compound-wound generator types, whereas others are battery operated capacitor-discharge types. A type of dynamo-condenser exploder can fire 100 detonators in series. This is a hand-driven generator together with a condenser is incorporated in this exploder. A neon lamps indicates when the condenser is charged with a least 1200 volts AC, and a button switch applies the voltage from the condenser to the output terminals. 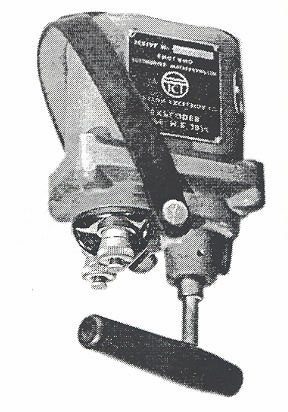