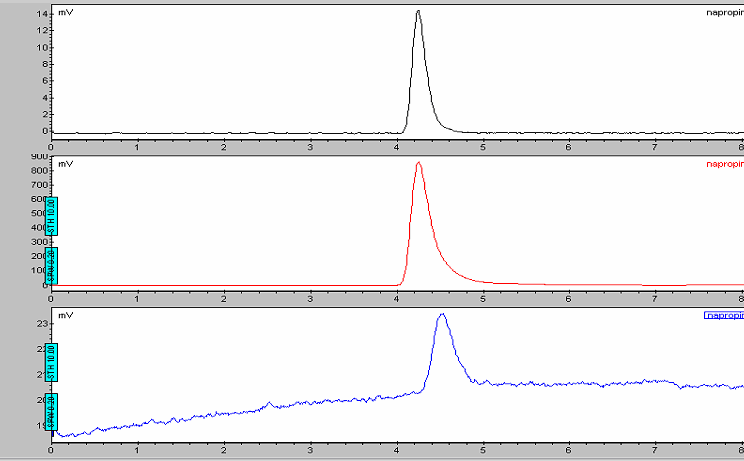 Detection of Chiral Drugs Using
HPLC with CD Detection
Recent American Food and Drug Administration Experimental
guidelines have effectively determined that mixtures of
chiral compounds can no longer be brought to the A prescription Naproxen tablet (500mg) and an over the pharmaceuticals market place. For new counter naproxen sodium tablet (220mg), were pharmaceuticals, each chiral form must be pure and separately ground. The tablets were dissolved in ethanol separately assessed for registration. The need for chiral and sonicated for 15 minutes. These solutions were then detection in the development of pharmaceuticals is diluted to a final concentration of 5µg/µL and filtered increasing due to regulatory changes and the demand for through a 0.45µm PVDF syringe filter. A Jasco HPLC single isomers. The key pharmaceutical industry system with a CD, OR and fluorescence detector was objective is now 'racemic switching' and single-isomer used. Injections size was 1µL. Separations were drugs. These guidelines require a means for chiral accomplished using a ChiralPak AD column (4.6 x 250mm) with a 100% EtOH with (0.1% TFA) mobile phase and a flow rate of 1.0 mL/min. CD/UV were Introduction
monitored at 260nm for the naproxen and 310nm for the Coumadin. Many molecules made up of the same number and type of atoms come in two forms commonly referred to as Prescription Nexium and Prilosec were also examined left-handed and right-handed isomers. This is not just by grinding the tablets and dissolving them in ethanol, some interesting quirk of nature: left-handed and right- and sonicating for 20 minutes. These solutions were handed forms of the same molecules can have brought to a final concentration 0f 1µg/µL with an profoundly different properties because of their chiral injection size of 2µL. Separations were accomplished form. In the food industry for example, limonene (left- using a ChiralPak AD column (4.6 x 250mm) with a handed) smells like lemons; limonene (right-handed) 100% EtOH mobile phase and a flow rate of 0.9mL/min. smells like oranges. One form of asparagine is used as a sweetener in foods and beverages, whilst its chiral Results and Discussion
Different chiral forms of molecules can have profoundly different biological effects. For example, one chiral form of the drug naproxen has 28 times the anti-inflammatory activity of the opposite chiral relative. Another example is the synthetic form of dopamine used to treat Parkinson’s disease: one isomer acts on the nerve cells to control the patient’s tremors whilst the other form is actually toxic to nerve cells. In crop protection it has been found that one chiral form of the pesticide Permethrine is much more toxic to insects than the other. Currently there is little control over which chiral form of a chemical compound is formed during a production process. This lack of control generally results in production of equal amounts of both chiral forms. At the molecular level the two chiral partners have identical Figure 1. Naproxen chromatograms. Top- CD detector,
physical properties and therefore are very difficult and middle- UV detector, and bottom- OR detector. expensive to separate. A far superior alternative to separation would be processes in which single pure The chromatograms of Naproxen and the naproxen chiral compounds are formed in the first place. This sodium are shown in Figures 1-2. Naproxen is used to application note will describe chiral detection of several relieve the pain, and inflammation caused by arthritis, and other inflammatory conditions. One chiral form of 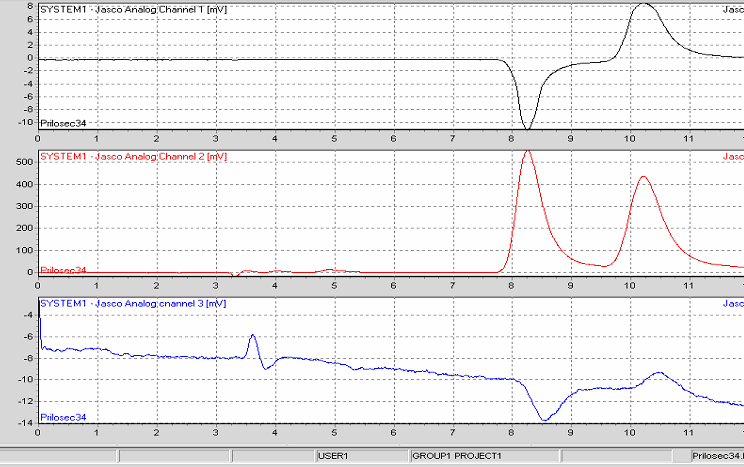 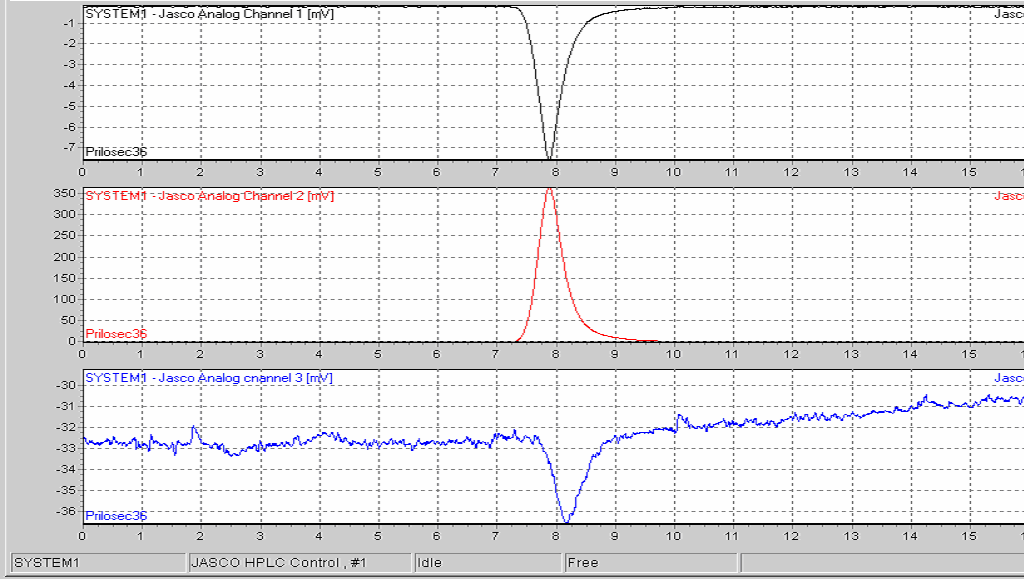 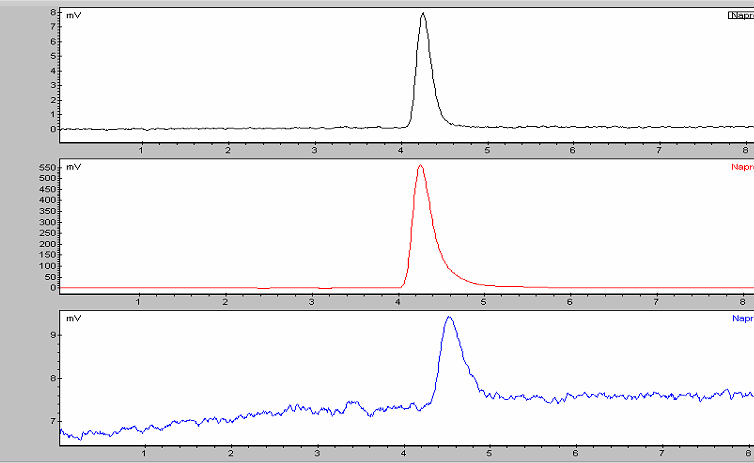 the drug naproxen (S-enantiomer) has 28 times the anti- The chromatograms for the Nexium and the Prilosec are inflammatory activity of the opposite chiral relative. shown in Figures 3-4. Prilosec is a proton pump The (R) isomer is reported to be a liver toxin. Both the inhibitor used to treat ulcers, heartburn, acid reflux, or Naproxen and the sodium salt showed only one peak in Zollinger-Ellison syndrome Nexium, (esomeprazole), is the CD chromatogram as expected. This indicates that the S enantiomer of omeprazole, the active ingredient in both the prescription and the over the counter versions Prilosec. Nexium was one of the first pharmaceuticals to have are meeting the requirements to be be repatented and marketed as a pure enantiomer of a enantiomerically pure. formerly mixed enantiomer drug. The Nexium has a superior clinical efficacy due to its higher and more consistent bioavailability. As expected, the CD of the prilosec shows the inclusion of both enantiomers while in the Nexium only the esomeprazole enantiomer is detected.
Figure 2. Naproxen-sodium chromatograms. Top- CD
detector, middle- UV detector, and bottom- OR detector.

HPLC with CD detection is an excellent method for the
separation and detection of chiral compounds including
pharmaceuticals. Both the fluorescence and the CD
detectors were very sensitive with respect to
concentration; however the fluorescence detector can not
give any indication as to which enantiomer is which.
The optical rotation detector is capable of discriminating
the enantiomers, but in all the materials studied was
found to be much less sensitive. In general the best
materials for use with the OR are sugars. Jasco Inc. currently offers the world’s only CD detector for HPLC.
Figure 3. Prilosec chromatograms. Top- CD detector,
middle- UV detector, and bottom- OR detector.
Contact:
Jasco, Inc.
8649 Commerce Dr. Easton, MD 21601
Phone: 800-333-5272 Fax: 410-822-7526
www.jascoinc.com