The Authors declare no conflict of interest related to this work.

Correspondence:
Salvatore Benvenga
Dipartimento Clinico Sperimentale di Medicina e Farmacologia
Università di Messina
A.O.U. Policlinico “G. Martino”
98125 Messina-Italy
E-mail: [email protected]
ABSTRACT
Several drugs inhibit the intestinal absorption of levothyroxine (L-T4) when taken simultaneously with the thyroid hormone or shortly later. Recently, in a study on 8 women, coffee has been reported to reduce the intestinal absorption of L-T4, so that L-T4 was added to the list of the medications whose intestinal absorption is decreased by coffee. We report another six adult patients, 5 women and 1 man, aged 38 to 62 years, who were observed during the last 18 months. All patients were referred because of failure of serum TSH to be normalized or suppressed by appropriate replacement (1.6-1.8 μg/Kg b.w.) or TSH-suppressive (2.0-2.2 μg/Kg b.w.) therapy with L-T4. In each of the six patients, serum TSH failed to be normalized or suppressed if L-T4 was swallowed simultaneously with coffee (or followed by coffee soon after). Correction of this habit, by drinking coffee 60 minutes after having swallowed L-T4 with water, resulted in normalization or Key-words: Thyroxine; Thyrotropin; TSH; Coffee; Intestinal absorption.

Background.
L-T4 is widely used across the world; indeed, in 2007 it was one of the top 5 medications in the United States by units sold (1). In adults, the mean daily dose of L-T4 is 1.6 µg/kg body weight for replacement and 2.2 µg/kg b.w. for TSH suppression (2). As well known, L-T4 therapy is monitored Recently, we have reported on the impaired intestinal absorption of L-T4 caused by drinking coffee within 10 minutes of swallowing the L-T4 tablet (3). These cases (8 women) were collected during a decade of clinical practise. Here we report six additional cases (5 women and 1 man), who were observed during the last 18 months, which suggests the degree of underestimation of the problem. None of the six patients was taking other known interferes of the intestinal absorption Case reports.
Patient no. 1 had a 3-year history of multinodular goiter and had been treated with L-T4 at a daily dose of 132 μg (1.8 μg/Kg b.w.). However her TSH was never below 0.80 mU/L. Careful history taking disclosed that she used to ingest the L-T4 tablet with water, but followed by one full cup of coffee within the next 5-10 minutes. We suggested her to drink coffee at least 60 minutes after swallowing the L-T4 tablet. She returned to us six months later with a serum TSH of 0.20 mU/L, and after another six months with a serum TSH of 0.04 mU/L (Table 1). Patient no. 2 had also been seen by other endocrinologists for multinodular goiter and was given L-T4 at a dose of 2.0-2.2 μg/Kg b.w./day. However, within the next 3 years serum TSH was never suppressed (1.1 to 1.7 mU/L). We found that she used to swallow the L-T4 tablet with a full tea-cup of barley coffee. She was instructed to postpone drinking barley coffee. Three months later, during which she took the L-T4 tablet with water 30 to 60 minutes prior to her barley coffee, serum TSH dropped to 0.62 mU/L: however, within the next 12 months, serum TSH dropped to from 0.19 to 0.02 mU/L, when the lag-time was prolonged to 60-90 minutes (Table 1). Patient no. 3 had the nodular goiter variant of Hashimoto’s thyroiditis, for which she underwent partial thyroidectomy 12 years prior to our observation. After thyroidectomy, she started taking L- T4 at a daily dose of 1.6 μg/Kg b.w., that over the years was increased up to 2.0 μg/Kg b.w., because serum TSH remained high. Even though serum TSH decreased (from 8.1 to 4.7 mU/L), it was still above normal. We found that she ingested L-T4 with one full cup of coffee. We instructed her to postpone drinking coffee by 60 minutes, and left her under the last regimen of L-T4 (1.8 μg/Kg b.w./day). Three and seven months later serum TSH was, respectively, 2.2 and 1.9 mU/L. She admitted, and her husband confirmed, that her compliance was partial (30 in lieu of 60

Patient no. 4 was a nurse. She had undergone right lobectomy 16 years earlier and was put on a daily regimen of 1.7 μg/Kg b.w. of L-T4. In the last two years serum TSH had fluctuated between 0.94 and 2.0 mU/L. We found that two years prior to our observation, the patient bought an espresso machine, and most of the time she used to ingest the L-T4 tablet with one or two cups of espresso. We instructed her to postpone drinking espresso and, over the next six months, postponing espresso by 60 minutes, TSH fluctuated between 0.06 and 0.37 mU/L (Table 1). Patient no. 5 had been seen by other endocrinologists for a nodular goiter and was given L-T4 at a daily dose of 1.6 μg/Kg b.w., but TSH was not suppressed (0.95 mU/L). We increased the dose to 2.1 μg/Kg b.w. and instructed her to postpone drinking coffee by 60 minutes. Over the next year, TSH decreased scantly (0.76 mU/L) when she persisted in her habit, but decreased substantially (0.43 mU/L) when she postponed drinking coffee by 60 minutes (Table 1). Patient no. 6 was a man, who five years earlier was thyroidectomized for a multinodular goiter. After thyroidectomy, he started L-T4 treatment (2.1 μg/Kg b.w./day). The patient took the L-T4 tablet with water, but drunk a cup of coffee within the next 10 minutes. Serum TSH was 2.7 mU/L. We asked the patient to postpone the cup of coffee by one hour. Three months later, TSH dropped Table 1. Serum TSH levels in 6 patients under L-T4 replacement or TSH-suppressive therapy
based on the modality of swallowing the L-T4 tablet.
Case number Age/Gender L-T4 tablet with coffee or soon after coffee L-T4 with water and drinking coffee postponed** * Normal values of serum TSH (in mU/L) were, respectively, 0.4 – 4.0 (cases #1 and #6), 0.47 – 4.6 (case #2), 0.27 – 4.2 (cases #3 and #4) and 0.4 – 5.0 mU/L (case #5). ** Details on the lag-time (in minutes) are in the text. Discussion.
In some circumstances, patients require greater daily doses of L-T4 to attain the desired fall in serum TSH concentrations. Interference can be related to a) patient characteristics, dietary habits

and compliance with the drug; b) the pharmaceutical characteristics of L-T4 and c) the interference of other medications (4). Several oral medications inhibit the intestinal absorption of L-T4 sodium when taken simultaneously with thyroid hormone. In most of these cases, the malabsorption of L- T4 is due to the binding of the hormone to medications, forming an insoluble or non-absorbable complex: these include cholestyramine (5), ferrous sulphate (6), aluminium hydroxide (7), calcium carbonate (8), sucralfate (9). Besides, L-T4 should be taken separately from food, since food adsorbs thyroid hormone, decreasing its availability for intestinal absorption (10-12): in particular, dietary fibres and herbal remedies reduce intestinal absorption of L-T4 (13,14). Drugs are absorbed after oral administration as a consequence of interactions between the drug, its formulation and the gastrointestinal tract. Based on the in vitro studies described in ref. 3, at least one mechanism for the interference of coffee is physical sequestration of L-T4; however, we cannot exclude other possibilities. These possibilities should not include changes in gastric empting, intestinal transit or pH, because these parameters have been reported to be unaffected by coffee (15,16). Coffee has been reported to impair the intestinal absorption of a number of medications and other substances (17-24) (Table 2), and very recently we added L-T4 to the list based on the said 8 cases observed and in vitro studies suggesting a sequestering effect (3).
Table 2. Impaired absorption of the most common drugs or substances caused by coffee*.
DRUG/SUBSTANCE
Anticancer drugs Camptothecin, Topotecan
Bisbosphonates
Antipsycothics
Amitriptyline, Imipramine, Phenothiazines 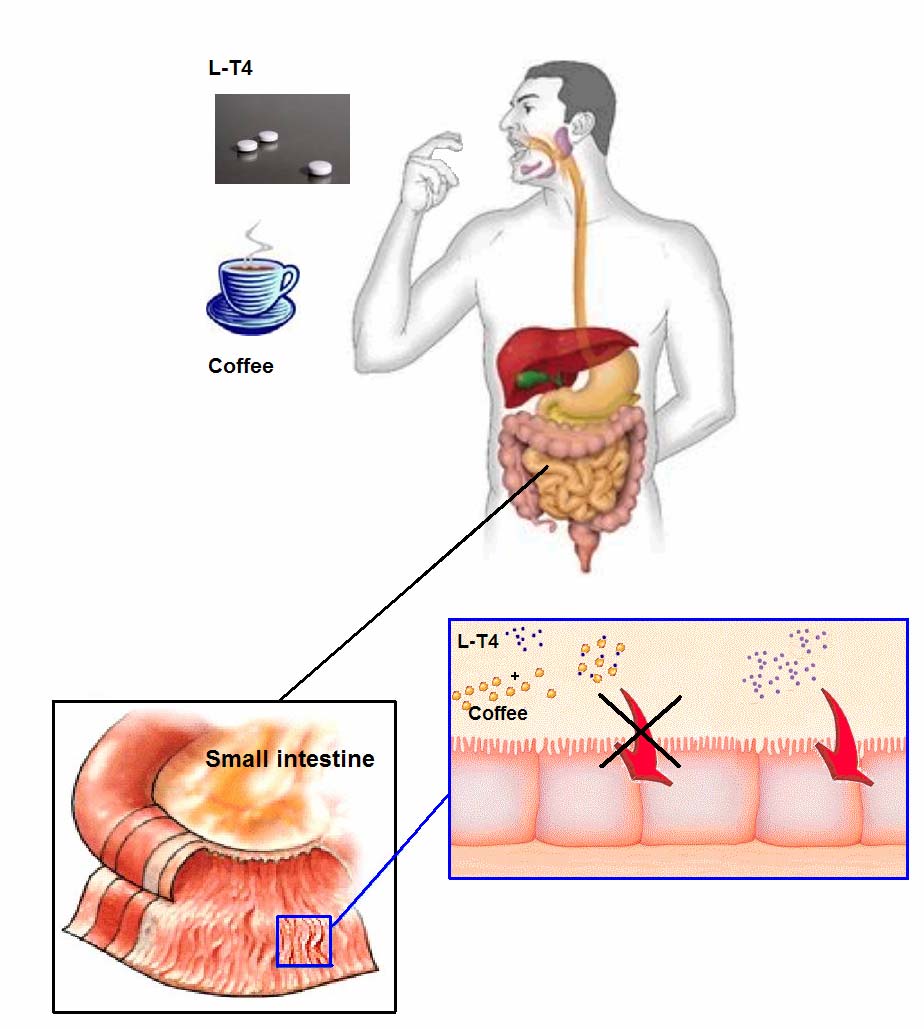 Thus, regardless of type, coffee should act in vivo by sequestering L-T4 and reducing hormone availability for uptake by the intestinal epithelium (Fig. 1). Fig. 1 Sequestering activity of coffee reduces intestinal absorption of L-T4.

(NRO: NCC, administration bonds, 1704, no. 7) John Riches and his wife Elizabeth had at least five children, of whom four were baptised in Belaugh. John died in 1704. Elizabeth and a daughter Judith died in 1705. All three were buried in Horning. Noverint Universi per presentes nos Elizabetham Riches de Belaugh in Cout Norfok viduam et Edwardum Canning de Tunstead in Cout plI Yeoman teneri &