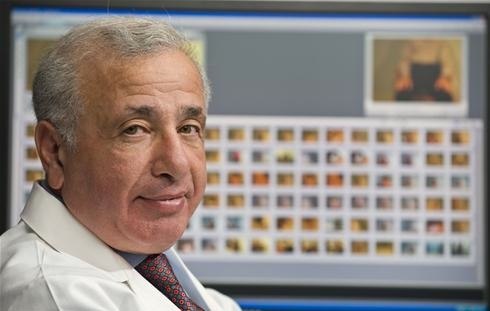 TODAYBaylor College of Medicine neurologist Joseph Jankovic is a patient man.
With the Food and Drug Administration’s OK, Jankovic has studied the drug tetrabenazine since 1979. Over the years, he estimates, he has dispensed tetrabenazine — or TBZ, as he calls it — to 1,000 people with Huntington’s disease, probably more than any doctor in the world.
Tetrabenazine helps tame the uncontrollable movements, or “chorea,” that characterize Huntington’s, an inherited degenerative brain disorder. It also appears to help treat other movement disorders, says Jankovic.
An orphan disease
Tetrabenazine was approved in the United Kingdom and Ireland in 1971. But U.S. companies were reluctant to invest in clinical trials of a drug for an “orphan disease,” defined by the FDA as one that affects fewer than 200,000 Americans. (Only 30,000 Americans have Huntington’s disease.) Perhaps even more surprising, the FDA questioned whether patients’ chorea was bothersome enough to justify treatment.
One problem, says University of Rochester neurologist Fred Marshall, is that before tetrabenazine, the side effects of drugs used “off-label” to treat chorea — namely antipsychotic drugs such as Haldol that can cause rigidity and drowsiness — could be worse than the symptom, so doctors advised against their use.
Jankovic says he started out trying to woo the largest drugmakers, “hoping that companies that have deep pockets would be in a good position to fund the studies that are necessary to get a drug approved. Obviously, big pharma was not interested. It is an orphan disease, and the profit margin is going to be small.” Americans with Huntington’s who weren’t Jankovic’s patients ordered tetrabenazine from Canada if they could afford it. But the worsening exchange rate put the price out of reach for many. A recent check found Canadian Internet pharmacies selling generic 25-milligram pills for $1.75 or more each in U.S. currency, brand-name 25-mg pills for around $2.35 each. Patients typically take a pill or more When the Canadian prices became prohibitive, Marshall says, he began arranging for patients to get the drug from Cambridge Laboratories, its Irish maker.
Finally, Jankovic says, his friend Kathleen Clarence-Smith, a neurologist with experience in developing drugs and getting them onto the market, founded Washington, D.C.-based Prestwick Pharmaceuticals in 2002 specifically to launch tetrabenazine in the USA. Jankovic said Clarence-Smith, who left Prestwick in January 2007, did not want to talk to a reporter for this story. Prestwick helped fund Jankovic’s research, and he served as a consultant to the company.
The FDA designated tetrabenazine a “fast track” drug in April 2004, and Prestwick submitted its “new drug application” in September 2005. Despite “fast track” status, it still took three more years to win FDA approval.
The agency was most concerned that tetrabenazine could exacerbate depression in Huntington’s patients, who already have a high suicide rate, Jankovic says. The drug controls chorea by depleting dopamine, a neurotransmitter that, at abnormally high levels, causes involuntary movements. But tetrabenazine also depletes serotonin, and low levels of that neurotransmitter can cause depression.
While she wouldn’t prescribe it to someone who has repeatedly attempted suicide, says psychiatrist Karen Anderson, director of the University of Maryland’s Huntington’s clinic, “I have not seen anyone on tetrabenazine develop terrible depression.” Antidepressants counter serotonin loss, Anderson says. Besides, “I’ve had a couple of people who were very incapacitated by their chorea whose quality of life improved hugely. These are hard things to measure.” Marshall, who oversaw one study that led to FDA approval, is sanguine about the drawn-out process. Thanks to the agency’s rigorous requirements for licensure, he says, “we know much more about tetrabenazine’s effects — its side effects and its potentially good effects.” Cost could be an issue
Last month, Ovation Pharmaceuticals in Deerfield, Ill., acquired the license from Prestwick to market Xenazine — tetrabenazine’s brand name — in the USA. Ovation spokeswoman Sally Young says her company hopes to make Xenazine available by year’s end.
Now that the FDA has approved tetrabenazine, health plans probably will start covering it. But cost is still an issue, because most Huntington’s patients have lost their health insurance. Young says Xenazine’s price has not yet been established.
“I’m obviously excited about reaching this milestone,” says Jankovic. This month, he received the Guthrie Family Humanitarian Award — named in memory of folksinger Woodie Guthrie, who died of Huntington’s, and his wife, Marjorie — from the Huntington’s Disease Society of America in recognition of his research and his efforts to make tetrabenazine available in the USA.
“But at the same time,” he says, “I’m worried that the drug is just going to be too expensive.”