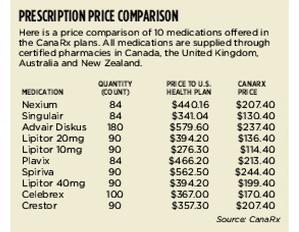 Why are drugs from CanaRx cheaper than those in Maine?
By ANN S. KIM
PORTLAND – News this week that a Canadian company had halted sales of mail-order prescription drugs to 1,200 Maine households raised an important question: Why were those drugs so much cheaper than drugs sold in Maine? The main reason: The medications came from countries whose governments negotiated prices with manufacturers. CanaRx supplied Maine households that participated in programs for state workers, Portland employees and workers at Hardwood Products Co. of Guilford until it suspended operations Aug. 17, after Attorney General William Schneider told the company it was violating state law because it was not licensed. The company provides brand-name maintenance medications at discounts of about 50 percent. The medications come from Canada, the United Kingdom, Australia and New Zealand. Most countries negotiate prices with drug manufacturers, said Ann Woloson, executive director of Prescription Policy Choices, a nonprofit education and public policy organization based in Hallowell. "We're the unusual ones," Woloson said. "We pay more than any other country for prescriptions. The primary reason is, we don't establish hard limits and we don't negotiate drug prices like other countries do." Information provided by CanaRx shows the sharp contrast between drug prices offered to health insurance plans in the United States and the company's customers. For example, 84 40-milligram pills of Nexium, which treats gastroesophageal reflux disease, cost $440.16 in the United States and $207.50 through CanaRx. For 84 10-milligram tablets of the asthma medication Singulair, the prices are $341.04 and $130.40, respectively. In Canada, the Patented Medicine Prices Review Board regulates the prices that manufacturers charge for about 1,200 medications that are under patent. In setting prices, the board considers such factors as the cost of similar drugs that are available in Canada, the Consumer Price Index and a requirement that Canadian prices for patented medicines cannot be the highest in the world. Woloson said there are some mechanisms in the United States for negotiating drug prices -- including rebates for state Medicaid programs -- but they are not mandated. The federal legislation for Medicare Part D, the prescription drug benefit, prohibits negotiating drug prices, she said. Also influencing Canadian prices is the country's encouragement of citizens to consider alternatives to brand-name drugs. Nexium, she said, is a good example of a brand-name drug for which there are alternatives that are just as effective and much less expensive. The bestsellers for CanaRx include medications for which generic alternatives are available. Only people whose physicians have indicated they need brand-name drugs for medical reasons can order them, said Chris Collins, senior program director for the company. Woloson noted that the Canadian government also puts more limits on drug companies' marketing. "In the United States, drug companies spend a lot more money marketing their products to providers and consumers," she said. Another reason for lower Canadian prices is lower liability costs, said Kenneth McCall, president of the Maine Pharmacy Association. "Canadian companies are sued less frequently than American companies, so the awards and damages are lower," he said. Canada's more regulated system creates not just price ceilings for drugs but also more restricted formularies -- the list of approved medications, McCall said. "Patients have little recourse other than to pay cash completely out of pocket" for medication that's not on the formulary, he said. CanaRx provided medications to Portland city workers and employees of Hardwood Products Co. for eight years. It began providing prescriptions to state workers earlier this year. The program for state employees caught the attention of the Maine Merchants Association, which represents 400 retailers, including chain and independent pharmacies. The association raised questions about CanaRx with state regulators. The state employees' program was expected to save the state more than $3 million a year. Schneider found that CanaRx served as a broker for a network of international manufacturers, doctors, pharmacists and pharmacies. None of the pharmacies was licensed with the state, and the state Board of Pharmacy is not authorized to license foreign mail-order pharmacies. State Sen. Troy Jackson, D-Allagash, plans to propose legislation that would allow CanaRx to do business in Maine. Gov. Paul LePage has indicated that he wants the business to be able to resume operations. The Maine Medical Association, which has supported drug importation, will have to see the details of any legislation before it can take a position, said Gordon Smith, the organization's executive vice president. He expects to be lobbied by parties on both sides of the issue. "We'll really look at it from the point of view of patients," he said. "Is it safe? And if it's safe, why not give them the opportunity?" Staff Writer Ann S. Kim can be contacted at 791-6383 or at

*Candidate answers to all questions have been written verbatim Region 1 Director Candidates’ Information Kevin A. Polo – From Carlinville, IL. Age 45. Farms 127 acres, growing corn, soybeans, and wheat. Graduate of University of Illinois-Springfield in Economics and Psychology and Southern Illinois University-School of Law. Current attorney who has represented numerous farmers in