SMU Medical Journal
(Volume – 1, No. – 1, January 2014)
Extra Esophageal Reflux Disease : An ENT Challenge
Soumyajit Das1*, Suvamoy Chakraborty2 and Pronoti Sinha3
1Assistant Professor, Department of ENT and Head and Neck Surgery, SMIMS, Gangtok 2Professor and Head,Department of ENT and Head And Neck SurgerySMIMS, Gangtok.
3Assistant ProfessorDepartment of Anatomy,SMIMS, Gangtok Dr. Soumyajit Das, E mail [email protected] No: 09864371311 Manuscript received : 01.01.2014Manuscript accepted: 16.01.2014 Laryngopharyngeal reflux ( LPR ) has long been implicated as one of the most common cause of persistent laryngeal inflammation. It has been associated with an acute, chronic or an intermittent pattern of laryngeal inflammation. Its effect is not just limited to the larynx as such but it has also been found to be the cause of persistent globus like symptoms, recurrent otitis media and paroxysmal layngospasm. LPR has also been implicated in the causation of laryngeal carcinoma, subglottic stenosis and cricoarytenoid joint fixation. Even though the condition is rampant , yet it is often a missed diagnosis by many otolaryngologists. The most important cause of this is probably lack of suspicion and lack of a specific noninvasive diagnostic modality. Even though 24 hour pH monitoring with dual probe remains the gold standard in the diagnosis, yet this modality is available in only select sophisticated centers.
MECHANISM AND PATHOLOGY OF GERD/ EERD
Acid reflux into the esophagus is considered to be pathological if the esophagaeal pH is less than 4 for a given percentage of time during 24 pH metry. The main mechanism SMU Medical Journal, Volume – 1, No. 1, January 2014
attributed to this reflux episodes ( in 70 – 100% ) is the transient lower esophageal sphincter relaxations ( TLSERs ) which is not associated with that of normal swallowing episodes. This TLSER s is mostly triggered by distension of the stomach due to ingested foods.1 However it is not the gastric acid that alone contributes to the mucosal injury. Rather it is the combination of the acid and the gastric protease pepsin that cause damage to the mucosa. Pepsin in a pH range of 2 – 3.5 causes significant damage to the esophageal mucosa. Bile reflux seen in severe cases of GERD has a synergistic role along with acid pepsin reflux in causing mucosal damage. Reflux of acid into the LES cause increase in tone of the upper esophageal sphincter ( UES ) in experimental situations. However GERD at the same time cause esophageal distension which is responsible for UES relaxation. The mucosa of the upper aero digestive tract is more sensitive to an acidic pH of less than 4 than the esophageal mucosa.
RISK FACTORS:
Extrinsic factors:
Increased feeding volume and dietary habits like fried food, alcohol, caffeine, fatty meal and tobacco increase the chance o reflux in healthy individuals.
Intrinsic factors:
Delayed gastric emptying, impaired esophageal motility and poor esophageal tissue resistance to acid are important factors. In addition prematurity and genetic predisposition are also identified risk factors.2 HOW DO PATIENTS PRESENT:
The symptoms of LPR/EERD are different from that of classical GERD and that is where most of the diagnosis are missed. It has been seen that the classical symptoms of heart burn, epigastric discomfort or pain or of reflux of gastric acid into the oropharynx are absent in almost two third of the patients. Patients of LPR on the other hand can present with a myriad of symptoms like hoarseness, persistent sticky sensation in the throat, dysphagia, chronic throat clearing, persistent nocturnal cough and episodes of breathing difficulties. A thorough clinical examination particularly that of the larynx can help establish the diagnosis.
Physical findings in LPR range from mild laryngeal edema/ erythema of the arytenoid 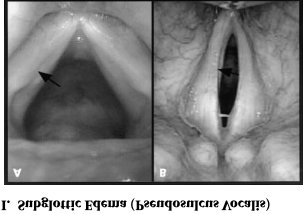 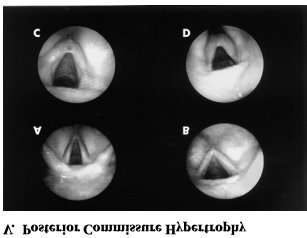 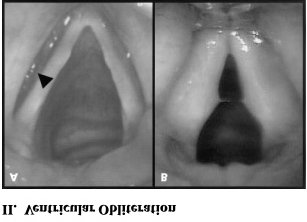 DIAGNOSIS:
Dual probe pH monitoring:
Though there are telltale signs of LPR which is visible on laryngeal examination, yet these findings are nonspecific. The gold standard modality for the diagnosis of LPR is 24 hours pH monitoring with dual probe.3 The distal probe is placed 5 cm above the lower esophageal sphincter and the proximal probe is placed in the hypopharynx 1cm above the upper esophageal sphincter. The recording is done in an upright position and in supine position.The most important parameter for diagnosis of GERD is the percentage of time the pH at the distal probe is less than 4. For upright position the upper limit of normal is 8.5% and in supine position it is approximately 2.5%.Reflux recorded at the proximal probe is diagnostic of LPR.
Bravo pH monitoring:
It is a wireless pH recording system where a small implantable capsule adheres to the esophageal mucosa and transmits the intraluminal data to a small receiver that the patient carries.
The major disadvantage with the pH recording systems is their inability to detect non acidic reflux that occurs in the absence of pH changes.
Newer methods to detect non acidic duodenogastro-esophageal reflux:
Bilitec 2000
It is an useful method to measure bile contents in the esophagus using the Bilitec SMU Medical Journal, Volume – 1, No. 1, January 2014
sensor.(Bilitec 2000; Synectics Medical, Stockholm, Sweden )4 Intraluminal impedance measurement:
This new technique is based on the demonstration of fluid or gas in the esophagus by changes in electrical conductance across electrodes placed in the esophageal lumen. Addition of a pH probe to the system allows detection of both acidic and non acidic reflux.5 TREATMENT:
Life style modification with changes in dietary habits is required. Foods like fatty meal, citrus fruits, tomato based products, coffee, chocolate and alcohol needs to be avoided. Weight reduction is required in overweight patients.
ACID SUPPRESSIVE THERAPY:
Use of proton pump inhibitors ( PPI ) is recommended at a higher twice daily dosing as it has been shown that they are more efficacious in early healing of lesions and preventing relapses when compared with histamine 2 antagonists.PPI should be continued for about 8 – 12 weeks. Omeprazole, lansaprazole, pantoprazole and esomeprazole have been found to be equally effective. It should be borne in mind that children of 1 -5 years age group have a higher metabolic rate of the PPIs and as such higher doses per kg body weight is often required in children more than 1 year age. Reference
1. Dent J, DoddsWJ,Friedman RH et al, Mechanism of gastroesophageal refluxing recumbent asymptomatic human subjects, J Clin Invest 1980; 65; 256 -67. 2. Sutphen JL, Dillard VL. Effects of maturation and gastric acidity on gastroesophageal reflux in patients. Am J Dis Child 1986; 140: 1062 - 1064 3. Jecker P, Orloff LA, Mann WJ. Extra esophageal reflux and upper aerodigestive tract diseases. ORL J OtorhinolaryngolRelat Spec 2005;67; 185 - 91 4. Orel R, Vidmer G. Do acid and bile reflux into the esophagus simultaneously? Temporal relation between duodenogastro- esophageal reflux and esophageal pH.PaedtrInt 2007; 49: 226 – 231.
5. Welz TG, Moroder C, Trachterna M et al. Esophageal pH monitoring and impedance measurement: a comparison of diagnostic tests for gastroesophageal reflux. J PediatrGastroenterolNutr 2002; 34: 519 - 523 6. Ballenger’s Otorhinolaryngology Head and Neck Surgery, 1185-93, 16thed, BC Decker SMU Medical Journal, Volume – 1, No. 1, January 2014
KEY NOTES:
probe is the gold standard investigation.
with acid suppression therapy is the primary modality of treatment.
SMU Medical Journal, Volume – 1, No. – 1, January, 2014, PP. 54 – 59
2014, SMU Medical Journal

Microsoft word - veterans article for off our backs

Veterans in an Unnamed War: Hidden Abuse, Truth-telling, Resistance and Recovery Laura Prescott is the president and founder of Sister Witness International Inc, a new organizationof formerly institutionalized women, girls, and their allies. She is also a recovering addict,psychiatric ex-patient, and survivor of childhood abuse. The following article is an edited version ofa keynote address