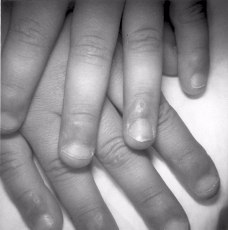 Calcinosis
Cutaneous Manifestations
Soft tissue calcifications occur in up to 40% of the pa- The rash may precede or follow the onset of proximal tients in the late stages. Skin calcinosis is seen as crusted muscle weakness. The characteristic rash is violaceous or papules or plaques around joints or as nonhealing sores.
heliotropic, occurring most prominently on the eyelids (Fig- Sometimes, the calcific material is extruded through the skin ure 1). Periorbital edema can be seen. Eyelid telangiectasia as a white cheesy exudate, leaving behind a dry pitted scar.
accompanies the periorbital edema in 50 – 90% of children.
Muscle calcification results in contractures or severe muscu- Exposure to sunlight can cause exacerbation of the skin in- lar pain. Four patterns of calcification are seen: superficial flammation or may precipitate activation of myositis.
and deep calcarial masses, deep linear deposits (Figure 4) Erythema can occur over the upper parts of the body (shawl and lacy reticular subcutaneous deposition encasing the sign) and extensor surfaces of arms and legs.
The skin over the knuckles may be hypertrophic or pale red and evolve into atrophic bands. Gottron’s papules are Musculoskeletal Features
flat-topped red papules on the knuckles(Figure 2).
Proximal muscle weakness is the major feature. This is Erythematous plaques with fine scales are seen on the elbows, manifested by difficulty in raising the arms above the shoul- knees, and medial malleoli of the ankles. A livedo ders, inability to comb the hair, and difficulty in climbing reticularis pattern may be seen on the extremities. Diffuse stairs. Neck flexor weakness is an especially sensitive indica- vasculitis may be manifested by nailbed telangiectasia, inf- tor of muscle weakness. Muscle pain is not a frequent symp- arction of oral epithelium, skin folds or digital ulceration.1 tom. The child usually keeps the limbs in a flexed position, The scalp may be involved with diffuse, scaly dermatosis which promotes development of flexion contractures and and often nonscarring alopecia4 (Figure 3). This is often misdiagnosed as seborrheic dermatitis or psoriasis.
There may be difficulty in swallowing due to palatal Panniculitis is a rare finding, where indurated plaques muscle weakness, with regurgitation and a nasal voice. Pool- and nodules are found mainly on the arms, thighs and but- ing of barium in a wide atonic pyriform fossa may be seen.
tocks. These can be erythematous and painful.5 Esophageal dysfunction may be present.
Hypertrichosis is another unusual feature of juvenile der- The myopathy may be focal, especially early in disease matomyositis, the pathogenesis of which is not known. Hair onset. Therefore a normal area may be erroneously targeted growth may be more prominent on the forehead, cheeks, in EMG or biopsy. MRI of the muscles can help detect the forearms and legs. Hypertrichosis may respond to the steroid Decreased bone density may be present, leading to in- Fig 1.—Heliotrope, erythema on the face of a 10 year old with a one Fig 2.—Gottron’s papules (same patient as in Figure 1) International Pediatrics/Vol. 15/No. 1/2000 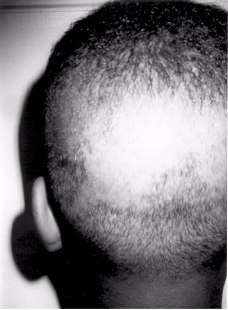 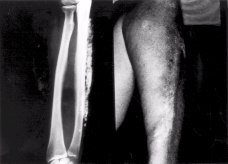 FINALIZED SEER SINQ’S MARCH 2012 Question: 20120033 Status Final Question Multiple primaries--Heme & Lymphoid Neoplasms: Is this a single primary (Essential thrombocyhemia)? The patient was originally diagnosed in 2007 with essential thrombocythemia and treated with Hydrea. On 12/4/09 the patient had a bone marrow biopsy showing primary myelofibrosis which the physician