EIS Clinical Pre-Study of Stress-Related Erectile Dysfunction
Clinical Investigator
Professor Giuseppe Tritto
Andrology Department
St. Louis Hospital
Paris, France
Sponsor and Monitor
Mr. Albert Maarek
Site of Investigation
St. Louis Hospital
Paris, France
Final Report
May 15, 2005
Summary
A test group of 37 male patients with erectile dysfunction (ED) undergoing consultation in the
Andrology Department at St. Louis Hospital (Paris) were measured by a device called the
Electro Interstitial Scanner (EIS) System.
All the patients presented neurovegetative dystonia with high stress levels and an increased level of catecholamine. None of the patients was undergoing treatment and no pathology was present.
The objective was to test the specificity and sensitivity of the ElectroScanGram (ESG), a graph generated by the EIS System, in reference to a patient database with stress-related ED and a control group of 30 subjects without evidence of stress. Hypotheses
The study was based on the following hypotheses:
The ESG graph can be used as a marker of stress and neurovegetative dystonia.
This hypothesis was validated by the statistical results: A statistical study of the database (Mean Plot: Whisker using STATISTICA version 6.0) indicated that four values (2, 4, 15, and 17) of the ESG graph showed a sensitivity of 84%(IC calculated to 95%) in the stressed ED group, compared to the control group, with aspecificity of 87% (IC calculated to 95%). The number of patients for this study is sufficient for a statistical analysis in order to calculate a level of specificity for the ESG graph.
This hypothesis was validated for the calculation of the specificity. However, for more accuracy regarding sensitivity, a meta analysis is necessary. Justification
Since the introduction of sildenafil citrate (Viagra®), increased reporting of erectile dysfunction
has occurred, opening the way for more conversation on this controversial issue and most likely
leading to increased prescribing of sildenafil. However, the origin of this problem is multifaceted,
and treatment with sildenafil includes cardiovascular contraindications.
The EIS System was placed in the Andrology Department of St. Louis Hospital to begin a clinical investigation on erectile dysfunction (ED) related to significant stress. It is important to note that the patients were not diagnosed with any other pathology and were not undergoingtreatment.
The EIS System
The principle of the EIS System is the measurement of the conductivity of interstitial fluid
locally and in vivo using the technique of bioelectric impedance. The EIS System uses DC
current for access to interstitial fluid data. (16)
This measurement uses six tactile electrodes:  Two on the forehead From these six electrodes, 22 tissue volumes are measured and are recorded on a graph. The graphic display of the conductivity values of these 22 volumes is the ElectroScanGram (ESG).
Tested hypotheses
The questions raised for investigation were:
1. Would the EIS System offer the possibility of providing a marker for patients with stress or 2. Would the number of patients in this study be sufficient for a statistical analysis in order to calculate specificity and sensitivity compared to a reference graph? STUDY CONDITIONS
Site of investigation
The recordings took place in the Andrology Department at St Louis Hospital from January 7,
2005, to April 20, 2005.
Subjects excluded
Excluded from testing were patients who:
 Had skin lesions in contact with the electrodes or excessive perspiration
 Were unable to be seated Had been fitted with metal pins or prostheses in the lower limbs or joints  Were undergoing specific treatments or taking certain medications (e.g., hypertensives,  Had a pathology that would have an influence on an erection Patients recruited
Two groups of patients were established:
 Group 1: A control group of 40 men in supposed good health. This group was recruited from
hospital employees and their families. These subjects had no pathology, no ED disorders, and were not taking medications.
 Group 2: All the patients in this group displayed chronic ED and evidence of stress. Like the
control group subjects, these patients had no diagnosed pathology and were undergoing no treatment. The patients at St. Louis Hospital were addressed either by their practitioner or by direct consultation in the Andrology Department.
Number of patients
Forty male patients were selected in Group 1. They ranged in age from 23 years to 59 years.
Thirty-seven male patients were selected to participate in Group 2 of this study. They ranged in
age from 17 years to 60 years.
Enlightened consent
After the safety aspects and benefits of the study were presented to the patients, they signed an
enlightened consent form.
Monitoring
Measurements were taken by the sponsor of the study, Mr. Albert Maarek.
Confidentiality
Due to patient confidentiality, identities of all the patients were kept anonymous and each patient
was numbered by date of examination. Only clinical data were mentioned for each patient.
See below the statistical result analysis of the ESG graph carried out with the method Mean Plot: Whisker (program STATISTICA, version 6.0.) These graphs represent the average of the ESG graph of the two groups of patients. 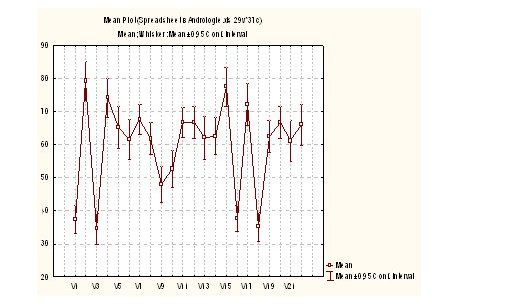 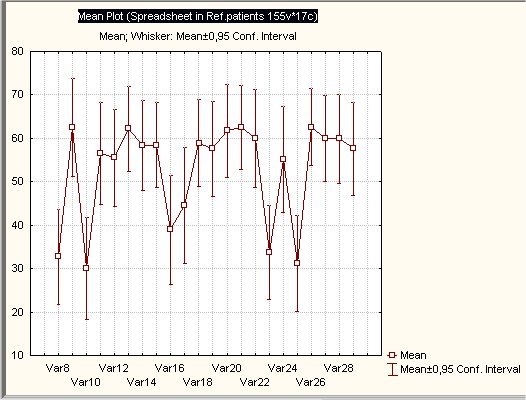