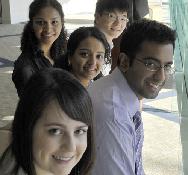 globecampus.ca ~ Serious illness gets serious attention GlobeCampus is The Globe and Mail’s site dedicated to undergraduate education in Canada. Through its innovative search, compare and rank tool called campus navigator, Canadian and visiting students can quickly find the school that would fit them best. The Globe and Mail’s annual Canadian University Report (formerly University Report Card) collects the opinion of over 40,000 students across the country. This site will guide parents in evaluating universities and colleges and help students make the right pick from the rich array of qualifiers and indicators available from each of the school’s profile.
2010 CTVglobemedia Publishing Inc. All Rights Reserved.
globeandmail.com and The Globe and Mail are divisions of CTVglobemedia Publishing Inc., 444 Front Street W., Toronto, ON Canada M5V http://www.globecampus.ca/in-the-news/article/serious-illness-gets-serious-attention/

TC’s inside IP A quarterly newsletter from the Intellectual Property Practice Group at Thompson Coburn LLPGreen Tech Gets the Green Light By William Holtz, Ph.D. In December 2009, the United States Patent and applicants to petition to have their green technology Trademark Office (USPTO) implemented a pilot pro-applications examined out of turn, thus reducing the gram to accel