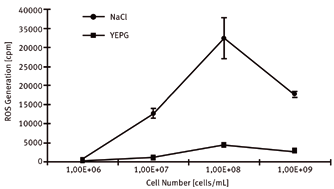 Inhibitory Effect of Terbinafine on Reactive Oxygen Species (ROS) Generation by Candida albicans U-C. Hipler1, Ch. Schroeter1, U. Wollina1, B. Hipler21Department of Dermatology and Allergology, Friedrich-Schiller-Universität, Jena, Germany; 2BMG LABTECH, Germany 1x109 cells/mL were prepared in saline and YEPG medium. Candida cells at a concentration of 1x108 cells/mL were incubated in saline Intracellular ROS detection by luminescence with terbinafine at concentrations of 1 µg/mL, 10 µg/mL and 100 µg/ mL dissolved in DMSO. Incubation was performed for 10 min and 60 Time- and dose-dependent inhibition of ROS generation min at 25°C in a shaking incubator. The duration was restricted to exclude effects of terbinafine on cell number and growth.
ROS measurements were carried out by means of lucigenin amplified chemiluminescence (CL) as described.11 Lucigenin solution was prepared in PBS at a concentration of 0.1 mmol/L. A 200 µL of fungal cell suspension was measured in the tube luminometer LB Candida albicans is one of the most important opportunistic fungal 953 (Berthold, Germany) or in the LUMIstar microplate reader (BMG pathogens. The yeast is able to cause candidiasis, a disease that can LABTECH GmbH, Germany). Chemiluminescent signals were recorded vary from superficial mucosal to life-threatening systemic disorders. using the slow kinetic method for yeast cells at different cell numbers Several virulence factors of C.albicans are known including the and for 1x108 cells/mL incubated with terbinafine. The calculation dimorphism, which is the ability to grow in either a yeast-like was performed using the average counts per minute (cpm) or RLU over (blastoconidial) or a mycelial (hyphal) form in response to different environmental factors.1 The argument that hyphae represent an advantage in tissue invasion seems obvious and widely accepted, but All data was expressed as means ± standard deviation. Each test was definitive experimental evidence is lacking.2 replicated. Data was analyzed using Student´s t-test for paired data. P < 0.05 was considered statistically significant. Reactive oxygen species (ROS) receive increasing attention as short acting compounds involved in inflammation and tissue damage. ROS can react with polyunsaturated fatty acids in cellular membranes, nucleotides, and sulfhydryl bonds in proteins3, and have been related Generation of reactive oxygen species was detectable in C. albicans blastoconidiae. The results were dependent on yeast cell number and media used for measurement. Chemiluminescent signals could be In C. albicans, mitochondria are capable of generating and releasing found at concentrations >1x106 cells/mL of C. albicans blastoconidiae. extracellular ROS.5 In our previous work, we showed that ROS The maximum was measured at concentrations >1x108 cells/mL (Fig. 1). generation by C. albicans is dependent on morphogenesis and is At higher concentrations ROS generation was inhibited in both media, highest in hyphal form cells.6 Thus, ROS generation may play a major which is very likely to be a protective mechanism.
role in tissue invasion and infection.
Terbinafine, a synthetic allylamine antifungal agent, inhibits ergosterol biosynthesis via squalene epoxidase. When exposed to terbinafine, fungi accumulate squalene while becoming deficient in ergosterol, an essential component of fungal cell membranes. The inhibition of squalene epoxidase leads to fungistatic and fungicidal action.7 There is also evidence that terbinafine, at therapeutic concentrations, can be considered a free radical interceptor in vitro and could exert an anti-inflammatory activity in vivo.8 The substance is capable of interacting with cell membranes and inhibiting the generation of reactive oxygen species.9,10 Fig. 1: Effect of increasing numbers of Candida albicans blastoconidiae on
In this study, the effect of terbinafine on ROS generation was analyzed. generation of ROS, measured by lucigenin amplified chemiluminescence We investigated whether terbinafine influences the oxidant properties of this pathogen. The media used for measurements had strong effects on total amounts of reactive oxygen species. Measurements in saline revealed the highest values, which could be explained by the lack of nutrients in this solution and resulting stress within the cells. Furthermore, YEPG medium C. albicans strain 3153A was pre-cultured in yeast extract peptone presumably possesses light quenching effects in chemiluminescent glucose (YEPG) medium 21 h at 25°C to obtain cells in the yeast phase measurements.6,12 Due to these results, further experiments were carried (blastoconidiae). Samples at the concentration of 1x106 cells/mL to out with blastoconidiae at a cell number of 1x108 cells/mL in saline. 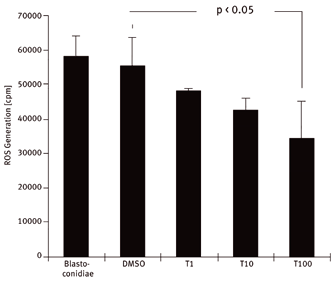 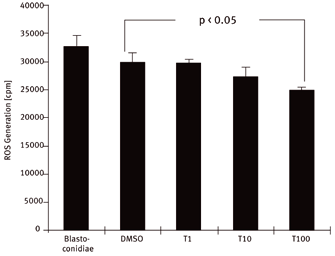