Jaakko Hyvätti Picprog 1.7 documentation http://hyvatti.iki.fi/~jaakko/pic/picprog.html Jaakko Hyvätti Picprog 1.7 documentation http://hyvatti.iki.fi/~jaakko/pic/picprog.html http://www.iki.fi/hyvatti/pic/picprog.html 2. Requirements
Jaakko Hyvätti Picprog 1.7 documentation
See the hardware section. This device is connected to a usual serial port of your PC, and is thesame device as used with many DOS PIC burning programs.
This program is written in C++, so you need a C++ compiler to compile it. This you should already have installed on your Linux system or Windows/Cygwin system.
Linux kernel version 2.0.32 or 2.1.45 or later.
PIC16 and PIC18 microcontroller programmer for Linux and Windows/Cygwin.
This programmer needs some functionality in Linux serial driver that as of kernel versions 2.0.32and 2.1.45 is available in standard kernels. The programmer uses TIOCSBRK and TIOCCBRK ioctl to control the state of TxD serial port output accurately. These ioctl’s are standard on BSDflavor unixes, like SunOS 4, but they still are unimplemented on many serial drivers in Linux kernel. Only the standard serial port is known to work by me.
(For Windows installations only) Earlier Cygwin versions do not contain the necessary TIOCSBRK and TIOCCBRK ioctl functionality.
Your assembler, or C compiler, or whatever, should produce either Intel IHX32, IHX16, or IHX8M format hex files. For assembler on Linux I recommend GNU PIC Utilities gpasm.
6. Burning PICs7. Reading PICs8. Exit values 3. Hardware
Use a serial port programmer device with the following pinouts: 11. Other available programmers12. Available languages PICmicro microcontrollers, or MCUs, are fine chips that are especially easy to program with a simple A very good programmer like this is for example PIC-Programmer 2 designed by Jens Madsen. I have device attached to a parallel or serial port. Because of the EEPROM or Flash memory, they are also heard that other programmers work also, for example TE20 and Olimex PG2C have been tested with easy and fast to erase and reprogram without need for UV equipment. This makes them very popular The description below is based on old version of JDM hardware. There is a new version of the PCB At the moment this is the second implementation of a PIC programmer for Linux that works with the available on Jens Madsen site. It supports more chips without jumper wires: PIC-Programmer 2. Please very simple and cheap serial port programmers. The first one I know was made by Ralph Metzler in use that one instead. Note however that his PCB does not support for example PIC16F628A that need 1996. My programmer was originally designed for PIC16C84 and PIC16F84 chips back in 1997, and to have pin 10, RB4/PGM grounded. Please modify the PCB to ground this pin if your chip has PGM since then I have implemented other chips without access to most of them. I have tested PIC16F628, PIC16F676, PIC12F675, PIC16F88, PIC16F876A, PIC16F76, PIC18F1320 and PIC18F458. Othershave used many other models.
I made a minor modification to the jdm84v23 schema and pcb mask, because I thought D4 was stressedon positive clock pulses - it short circuits the rs-232 RTS pin to GND. I added a 10k resistor between 1. Background reading
D4 and D3. But it also is not absolutely required, as the clock pulses are short and rs-232 is protectedfor short circuits anyway. Now I have noticed that this resistor makes the programmer less reliable,especially with later PIC chips, like PIC16F76 and PIC18 family. If you have built the hardware I You really should take a look at the Microchip www-pages and read the device datasheets and previously suggested, and it does not work, please short circuit that resistor or build the new PCB from Maybe the best source for PIC information is the home page of PICLIST discussion group. Also To support for example PIC16F628 and PIC16F88, which have a low voltage programming mode, the historically a good collection of links and software for PIC was in David Tait’s PIC links page and in circuit was again modified to ground the RB3 pin 9 and the RB4 pin 10. This prevents the chip from GNUPIC pages. I have also documented here the software I took a look at back in 1997. I have focused entering the low voltage programming mode. To support for example PIC12F675, PIC16F630, and into Linux support, so I have never used any DOS software mentioned.
PIC16F676, pin 1 was connected to Vdd. Other jumpers need to be installed as described below. 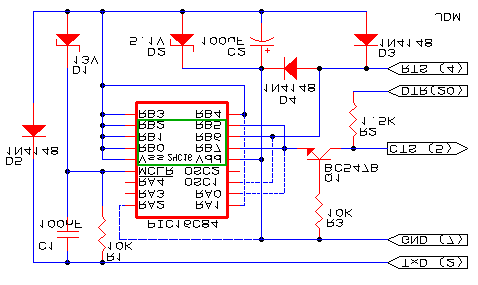 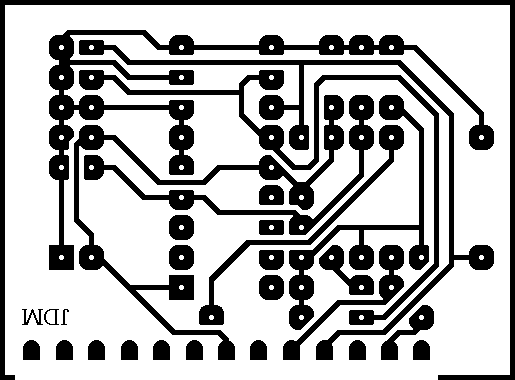 Jaakko Hyvätti Picprog 1.7 documentation http://hyvatti.iki.fi/~jaakko/pic/picprog.html maintained Picprog by fixing obvious compilation problems and updating documentation. Version1.0.1 was put together in May 2001 and included mainly documentation fixes. In June 1997 I hadworked on adding support for different memory sizes of different PIC chips, and these changes andagain documentation updates were released as version 1.1 in February 2002. I also found theprogrammer hardware I thought I lost a few years back, and was able test that it still works.
Picprog-1.0 was ported to FreeBSD and included in the distribution around September 1999. MITMASLab 6.186, a student-run robotics course, seems to have used it since January 2001. Recently thisdocumentation page has attracted steadily over 1000 visits per month, so I guess someone is finding ituseful.
Nowadays I mostly test Picprog with new chips, and sometimes I start a new project like KanSatsatellite or 8-PIN PONG, and never finish them.
15. Copyright notice
This program is free software; you can redistribute it and/or modify it under the terms of the GNUGeneral Public License version 2 as published by the Free Software Foundation.
This program is distributed in the hope that it will be useful, but WITHOUT ANY WARRANTY;without even the implied warranty of MERCHANTABILITY or FITNESS FOR A PARTICULARPURPOSE. See the GNU General Public License for more details. You should have received a copy of the GNU General Public License along with this program; if not,write to the Free Software Foundation, Inc., 59 Temple Place - Suite 330, Boston, MA 02111-1307,USA. Email: [email protected]: http://www.iki.fi/hyvatti/ Please send any suggestions, bug reports, success stories etc. to the Email address above. To avoid myspam filters, please put the word ’picprog’ somewhere on the subject line.
If you want to support the developement of picprog, please make a donation to Jaakko via PayPal(click on the button).
Jaakko Hyvätti /[email protected] /+358 40 5011222