Two Years of Testosterone Therapy Associated with Decline
in Prostate-Specific Antigen in a Man with Untreated
Prostate Cancer
Harvard Medical School—Urology, Brookline, MA, USA A B S T R A C T
Introduction. Testosterone (T) therapy has long been considered contraindicated in men with prostate cancer (PCa).
However, the traditional view regarding the relationship of T to PCa has come under new scrutiny, with recent
reports suggesting that PCa growth may not be greatly affected by variations in serum T within the near-physiologic
range.
Aim. This report details the clinical and prostate-speciﬁc antigen (PSA) response of a man with untreated PCa
treated with T therapy for 2 years.
Methods. Measurements of serum PSA, total and free T concentrations were obtained at regular intervals at baseline
and following initiation of T therapy.
Main Outcome Measure. Serum PSA during T therapy.
Results. An 84-year-old man was seen for symptoms of hypogonadism, with serum total T within the normal range
at 400 ng/dL, but with a reduced free T of 7.4 pg/mL (radioimmunoassay [RIA], reference range 10.0–55.0). PSA
was 8.5 ng/mL, and 8.1 ng/mL when repeated. Prostate biopsy revealed Gleason 6 cancer in both lobes. He refused
treatment for PCa, but requested T therapy, which was initiated with T gel after informed consent regarding possible
cancer progression. Serum T increased to a mean value of 699 ng/dL and free T to 17.1 pg/mL. PSA declined to a
nadir of 5.2 ng/mL at 10 months, increased slightly to 6.2 ng/mL at 21 months, and then declined to 3.8 ng/mL at
24 months after addition of dutasteride for voiding symptoms. No clinical PCa progression was noted.
Conclusion. A decline in PSA was noted in a man with untreated PCa who received T therapy for 2 years. This case
provides support for the notion that PCa growth may not be adversely affected by changes in serum T beyond the
castrate or near-castrate range. Morgentaler A. Two years of testosterone therapy associated with decline in
prostate-specific antigen in a man with untreated prostate cancer. J Sex Med **;**:**–**.
Key Words. Testosterone; Prostate Cancer; Hypogonadism
Introduction
risky as once believed in men with a prior historyof PCa [6]; the biologic effect of T therapy in these F or several decades, there has been general men is uncertain since the absence of PCa recur- agreement that testosterone (T) therapy is rence may simply reﬂect complete eradication of contraindicated in men with a history of, or suspi- cion of prostate cancer (PCa) due to the fear that This report details the effect of 2 years of T higher serum T would lead to cancer recurrence or therapy in a man with untreated PCa.
progression. However, recent publications havefailed to ﬁnd a correlation between PCa and serum Case Report
T in noncastrated men [1,2], and there are nowseveral studies that have reported no PCa recur- This is a case report of an 84-year-old male seen rence in men receiving T therapy after deﬁnitive for erectile dysfunction and anorgasmia. Despite treatment of localized PCa [3–5]. Although these his age, he continued to work as an attorney and latter reports suggest that T therapy may not be as exercised three times weekly. Treatment with 2008 International Society for Sexual Medicine 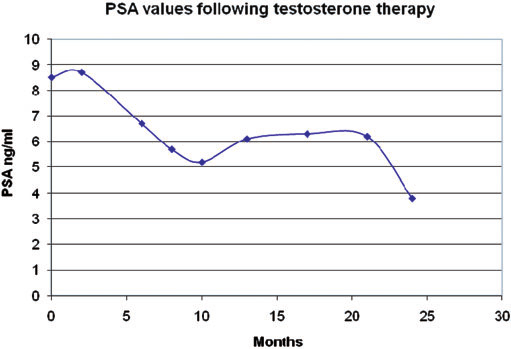