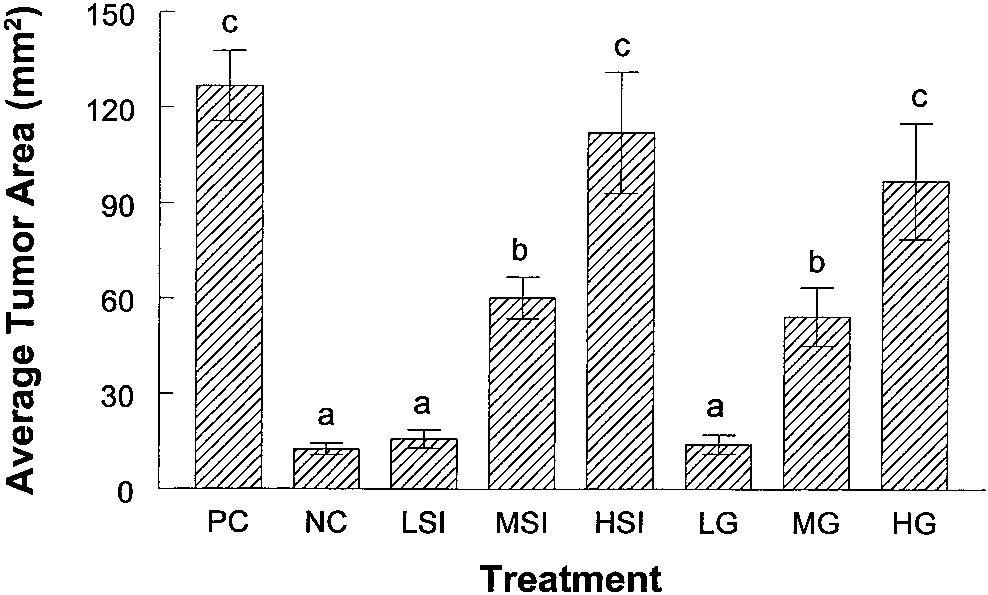 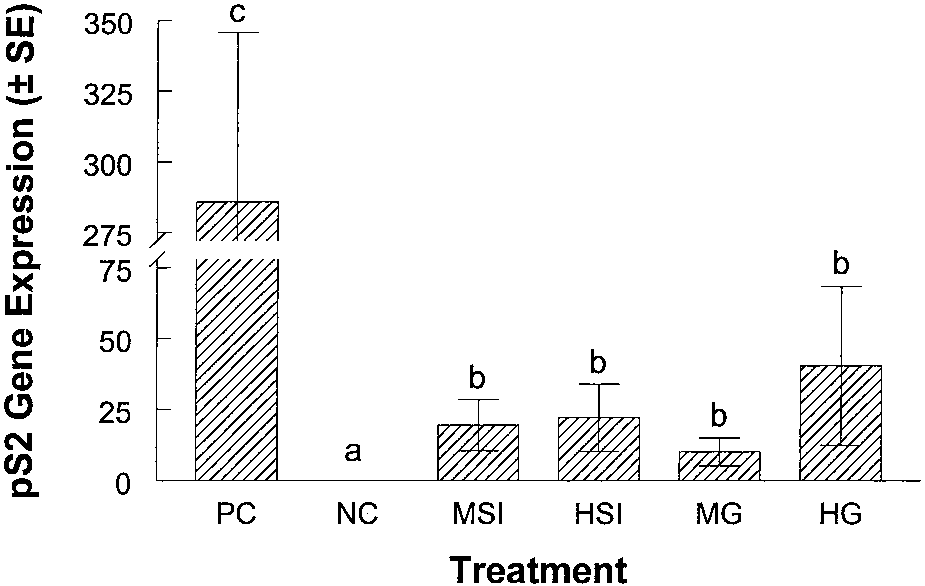 SOY PROTEIN AND E2-DEPENDENT BREAST CANCER TUMOR GROWTH (Fig. 2). Body weight was monitored weekly, and no significantdifference was observed among the treated and control groups (datanot shown). These data indicate that dietary soy isolates containingincreasing concentrations of genistein and casein-based diets contain-ing equalized concentrations of genistein act in a dose-dependentmanner to stimulate growth of human estrogen-dependent breastcancer cells transplanted into athymic mice. Also, it is important tonote that there were no significant differences in growth of tumors inthe negative control, low soy isolate, and low genistein groups. Thesedata suggest that there is a threshold level of dietary genistein belowwhich no increase in estrogen-dependent tumor growth is observed.
Effect of Soy Isolates and Genistein on Estrogen-responsive pS2
mRNA Expression in MCF-7 Tumors. To evaluate the ability of
soy isolates and genistein in the diet to enhance the expression of an
Fig. 3. Effect of soy and genistein treatments on pS2 gene expression in MCF-7 estrogen-responsive gene, pS2, we conducted Northern blot analysis tumors. At the end of the study, tumors were collected for analysis. For the detection of using mRNA isolated from tumors excised from animals in each pS2 expression, mRNA was isolated from each tumor. Northern blot analysis was used toquantify the amount of mRNA produced as a result of the treatments. Three tumors from treatment group. At the conclusion of the study, tumors from the each treatment group were used for pS2 analysis. pS2 expression is presented as the negative control, low soy isolate, and low genistein groups were too relative pS2 mRNA level. Glyceraldehyde-3-phosphate dehydrogenase was used as astandard. Bars, SE.
small to obtain sufficient RNA for Northern blot analysis. Negativecontrol tumors were collected from a separate set of tumor-bearingathymic mice in which the tumors were regressed for 11 weeks after ing and nonproliferating cells in a given field of view were counted, E pellets were removed. This allowed us tumors that were regressing and final values were expressed as percentage of proliferating cells.
(attributable to low E ) but were large enough for RNA isolation.
The percentage of proliferating cells value for the negative control Expression of pS2 was not detectable in the RNA isolated from group was 1.4%. Both the MSI and MG groups had a significantly negative control animals. Expression of pS2 was very low in the higher percentage of cellular proliferation when compared with the isoflavone-treated animals, ϳone-tenth that of the E -treated mice.
negative control group with values of 9.4% and 8.2% (P Ͻ 0.001).
However, pS2 expression was significantly (P Ͻ 0.05) higher in The animals consuming the high soy isolate with the highest concen- animals consuming the medium and high soy protein isolates when tration of genistein and the animals consuming the highest concen- compared with the negative control group. Levels of pS2 expression tration of genistein in control diet had proliferation of 11.9% and in tumors from animals that were consuming medium and high 11.8% respectively. These values were significantly higher than all of concentrations of genistein in the AIN93G diet were also significantly the other groups (P Ͻ 0.05; Fig. 4).
(P Ͻ 0.05) higher than the negative control group (Fig. 3). However,there was no significant difference between the MSI and HSI groups DISCUSSION
Cellular Proliferation in MCF-7 Tumors Excised from Animals
The purpose of this study was to determine the influence of dietary Consuming Soy Protein Isolates and Genistein. Cellular incorpo-
soy protein isolates containing increasing concentrations of genistein ration of BrdUrd was used as an indicator of cellular proliferation in on the growth of estrogen-dependent human breast cancer cells trans- MCF-7 tumors. Cells that stained positive after immunohistochemical planted into athymic mice. The results presented here demonstrate that analysis were considered actively proliferating cells. Both proliferat- soy protein isolates containing varying concentrations of genistein canstimulate growth of estrogen-dependent tumors similar to that seenwith pure dietary genistein. Soy protein isolates stimulated the growthof MCF-7 tumors in a dose-dependent manner as the concentration ofgenistein increased in the isolates. Tumor growth was significantlyincreased in animals consuming genistein at concentrations of 150 and300 ppm in both the casein- and soy-based diets. Dietary concentra-tions in this study are lower than previous studies in which MCF-7tumor growth was observed in athymic mice consuming dietarygenistein at 750 ppm (5). In the study presented here, tumors tooklonger to reach a maximum size when compared with the previousstudy, which was likely attributable to the lower concentrations ofgenistein in the diet. Cellular proliferation was increased in a dose-dependent manner as genistein concentrations increased in both thesoy protein and casein-based diets consistent with the tumor growthdata. The increase in MCF-7 cell proliferation was likely attributableto an estrogenic effect as indicated by the modest increase in pS2 Fig. 2. Average tumor area for week 29. Female ovariectomized athymic mice were expression. These findings suggest that genistein, when fed to athymic implanted with a 2-mg E pellet. The animals were then injected with 1.5 ϫ 105 MCF-7 mice in pure form or in a food source rich in the isoflavone such as cells/site in four locations. Subsequently, tumors developed and were allowed to grow toan average cross-sectional area of 40 mm2. At this time, E pellets were removed from all soy protein isolate, can stimulate estrogen-dependent tumor growth in of the mice and they were assigned to one of eight treatment groups: positive controls that were reimplanted with a new 2-mg E pellet, negative controls that were fed AIN 93G rodent diet alone, LSI containing 15 ppm genistein, MSI containing 150 ppm genistein, The estrogenic activity of isoflavones has been well documented in HSI containing 300 ppm genistein, LG AIN 93G ϩ 15 ppm genistein, MG AIN in vitro, in vivo, and clinical studies. Genistein can bind to the 93G ϩ 150 ppm genistein, and HG AIN 93G ϩ 300 ppm genistein. Tumors from each estrogen receptor ␣ with an affinity 100-1000 times lower than E2 treatment group were evaluated by measuring tumor area. Measurements from all of thetumors in each treatment group were combined and averaged. Bars, SE.
(21). Additionally, in ovariectomized Sprague Dawley rats, dietary 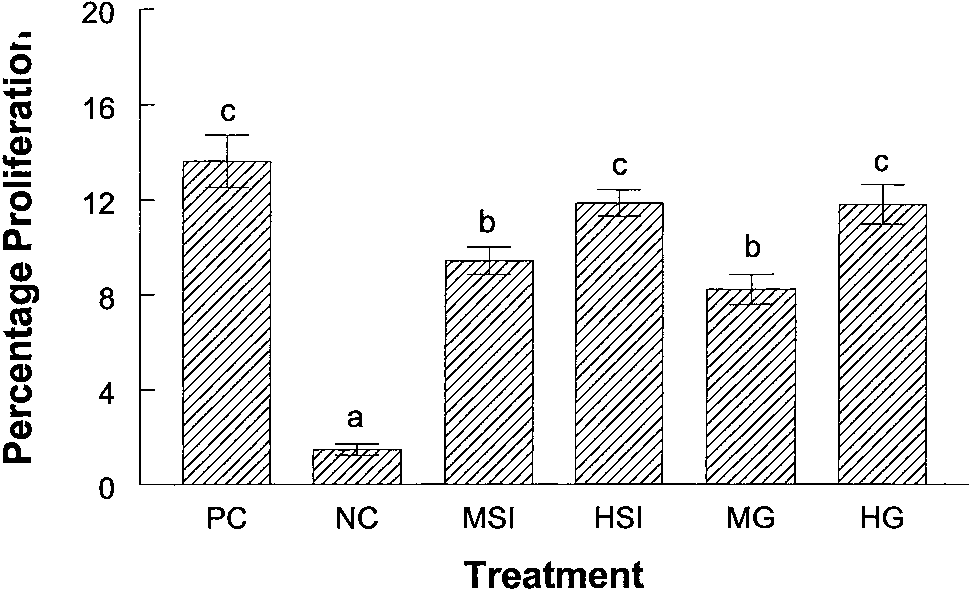 : (501) 834 PAIN (7246) www.unitedpaincare.com  : (866) 830 0939 PATIENT CONSENT FOR TREATMENT OF PAIN WITH CONTROLLED SUBSTANCES CONTROLLED SUBSTANCES are drugs or chemical substances whose possession and use are regulated under the Controlled Substances Act . These drugs have potential for abuse or diversion.Medications which bear the letter C together with Roman numerals II