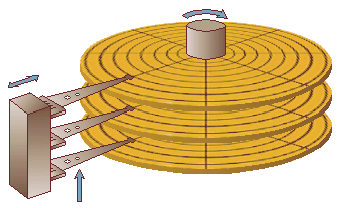 chines (since it is commonly understood that everyone will need a hard-disk) thecontroller interface is built onto the motherboard. The controller card, interface,includes the circuitry that serves as an interface between the motherboard and thehard disk.
Two major standards for Secondary Storage interfaces have been adopted. The
most common is the Integrated Drive Electronics (IDE) with an increasing num-
ber of machines now supporting a second standard due to its greater flexibility (the
Small Computer System Interface, SCSI).
Integrated Drive Electronics
When IBM released its IBM PC AT with an IDE controller card, this defined for
copiers the standard interface for hard disks. At first, the electronics was built
onto an interface card that was plugged onto the motherboard, and with the in-
creasing use of hard disks most new machines now have the IDE electronics built
into the motherboard. Continuing improvements to the IDE interface standard has
seen IDE improve to support increasing capabilities of hard disk drives. These
improvements have meant changing the IDE acronym to EIDE (Enhanced IDE),
IDE Mode 4, etc.
An important limitation in the IDE design is the limit of allowing only two devicesper interface. A microcomputer with one IDE interface can have at most twohard disks. A microcomputer with two IDE interfaces can have at most four harddisks. In general only two IDE interfaces can be used in a microcomputer.
Small Computer System Interface (SCSI)
Small Computer System Interface (SCSI) is an adaptation of older technology
than IDE but was only previously available on more expensive computer systems.
SCSI’s major advantages over IDE include the ability to transfer data from the
computer to the hard disk at a much faster speed, the ability to connect more de-
vices per interface, and the ability to connect to input devices other than hard disks
(such as scanners).
SCSI interfaces can support up to seven devices each, and as many SCSI inter-faces that can fit on the motherboard can be supported. An important develop-ment for the SCSI interface is the increasing popularity of scanners (input devicesthat can grab images from paper documents) and CD-ROMs. Scanners require aninterface to the computer that can cope with the large amount of data being sentvery quickly. SCSI copes with scanners very well without the limiting constraintsIDE places on the number of devices that can be connected.
SCSI has become an important standard for connecting devices for transferringlarge volumes of data to the computer.

Iomega ZIP Drive
Iomega Corporation released a new disk storage product they called the ZIP drivein 1994. The distinct advantage of the ZIP Drive was its portability, similar tofloppy diskettes, and its storage capacity similar to a hard disk. The ZIP disk in-creased the storage capacity for a removable storage device 100 fold(from 1.44MB to 100MB) while at the same time controllingcosts and maintaining the reliability attributed to hard disks.
The ZIP drive unit is 18 x 13 x 4 cm and weighs about half-a kilo.
has rubber feet to stabilise the unit in either vertical or horizontal positions. Thereare two indicator lights: green for power and amber for disk access. It has an ejectbutton, but no on/off switch.
Three models, a SCSI model, an IDE and a parallel port model, provide customerswith the option for speed (SCSI), cost-effective speed (IDE) and extremeportability. The portability of the SCSI drive model includes theability to be moved between Macintosh and IBM PCs. Dueto the greater transfer rate of SCSI devices, the SCSImodel is about 2 to 5 times faster than the parallel portmodel.
The parallel port model can only be used with a PC and connects to the computer'sparallel port. Since all PCs have printer ports, the parallel port model is ex-tremely transportable between PCs. The drive also offers a printer pass-thoughfeature so you can still use your printer while the ZIP drive is connected.
The IDE model can only be used with a PC and connects to the IDE connector,similar to most PC Hard Disks, with a door similar to the floppy disk for the ZIPto be put into the drive (computer) and taken out with ease.
Jaz Drives.
Iomega also introduced the market to a higher capacity removable storage devicecalled the Jaz drive. The Jaz drive can pack up to 2G on each disk , and there isno limit to the number of disks you can use. An older version is available withsupport for only 1G disks.
Because Jaz drives are only available as SCSI devices they are faster Like Zip drives, Jaz Drives are portable and make transporting large amounts of information easier. It weighs less than 1 kilogram.
Jaz drives come as external (portable) and internal. A Jaz insider drive fits into any available 3.5" drive bay, the same space reserved for addingnew Hard Disks into most computers.
With the Jaz drive's speed and the Jaz disk's capacity and price, the Jaz is a usefullarge system backup device. In environments where large amounts of data are ma-nipulated a Jaz drive is a good supplement to the existing hard disk.
Jaz Disks.
Compact Disks and Digital Versatile Disks (DVD)
Our discussion so far on secondary storage has focussed on magnetic media de-vices. With the increased requirement for larger datafiles by multi-media applica-tions the high cost of magnetic medias has increased the research and availabilityof optical (laser) based storage devices.
CD-ROM Drives are an old technology but their popularity has increased with thecorresponding requirement by programs with animated pictures, video, and soundfor more storage space. Products such as encyclopedias and Windows 95 applica-tions with animated tutorials require far more space than is practical with floppydiskettes. For example, the CD-ROM version of Windows 95 would require over24 floppy diskettes to store; each diskette would cost approximately USD 50¢ toput together for the manufacturer whereas the complete CD-ROM would cost themanufacturer approximately USD$1.00.
With the increasing number of computers with CDROMs, a market has grownfor CD Writers (Drives which can write onto CDs). With a much lower cost of media (the CDs themselves) and a more permanent record of what has been written, CDs have become an important tool for people distributing soft- ware tools, data within an organisation due to the large capacity and ready avail-ability of CDROM readers. For data that does not change, such as the nationalCensus records, or Court Records, Parliamentary Records, CD Writers are an ef-fective tool.
Standard computer CDs suffer from the problem of being slow compared to mag-netic disks and the CDs being read-only.
To help alleviate, solve the speed and read-only problem, a number of opticalproducts have been introduced with little market success. Digital Versatile Disks(DVD), a new optical drive and CD format, is being sponsored by number of the large technology manufacturers to hopefullyprovide a solution for the increasing need for large stor-age, speed, and lower costs.
DVD is promoted as the successor to CD-ROMs, laserdisks, audio CDs, and VHS video cassettes. With an ex-pected capacity of 17 Gigabytes, DVDs should be able tostore full movies, audio CDs, and high quality images while still be-ing the same physical size as today’s CDs. Although the 1997/98 diskdrives and DVDs are read-only the writable variations should appear on the mar-ket by late 1998 or in 1999.
Terms and
Definitions
Description
Review Questions
1. A disk which is write protected means that:a) the write protect notch is coveredb) existing files cannot be erased from the diskc) new files cannot be written on the disk.
d) all of the abovee) none of the above 2. A computer has two types of storage. Describe at least one difference between pri-mary storage and secondary storage.
3. Examples of Primary storage are RAM and ROM, describe one difference and onesimilarity between them.
a) Similarity:b) Difference: 4. Disks (hard and floppy) are examples of secondary storage devices, and are verypopular. Give 2 reasons why disks are popular.
5. Describe one difference between a floppy disk and a hard disk 6. The way data is stored in main memory and disks differ in many ways. Describe one
difference and give one disadvantage and one disadvantage for each.
a) Memory:
i) method:
ii) advantage
iii) disadvantage
b) Disk:
i) method:
ii) advantage
iii) disadvantage
7. Floppy disks are available in various types and thus differ in capacity. See if you canwrite up the table and capacities relative to the disk size and density.
Sources and References
http://www.tongatapu.net.to/compstud/ - Computer Studies Course Notes
http://www.tongatapu.net.to - Tonga on the 'NET
http://www.tongatapu.net.to is available on all networked computers at Queen Sa-lote College.