To my Walnut Hills class of ’53 classmates: 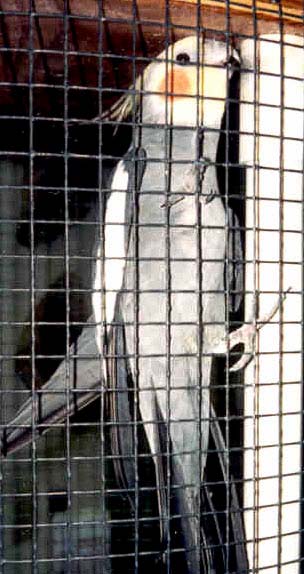 Wherein we encounter death, deception, and a new meaning for the term "birdbrain"
About ten years ago, while walking through the back yard, we came upon a cockatiel
sitting on a limb just over our heads. One wing had been clipped and the other
appeared broken, possibly during his escape from his previous abode. We took him in,
fed him and put a laundry basket over him for a temporary cage. When Ruth found no
trace of a missing bird report at three different agencies, I built him a cage and he would
join us for Sunday breakfast by the waterfall in the back yard. We would occasionally
let him out and he would attempt to fly, always going in circles and never for more than
about ten feet. He always seemed relieved to get back in his cage.
Ruth named him Demetrius because his crest reminded her of a gladiator. He was
feisty and mean-tempered. Ruth had taught him several four or five note songs
including the first four notes of Beethoven's fifth, on which he always went flat on the
last note, cracking us up. He would sing the songs when I approached his cage but
when Ruth did the same, he would hiss at her and try to bite her.
At lunch one day, with three of her work buddies, Ruth noticed they were signing up their grade-school-aged offspring for the Burger King Kids Club, so she signed up Demetrius, giving his age as six and date of birth as January first. For a couple of years we would periodically get coloring books and other kiddie stuff for "Demetrius B. Flinn" and, every January first, a birthday card. We would sometimes put a page of a coloring book on the bottom of his cage and he would "color" it, (rarely staying between the lines.) Then one day Demetrius went to chew on that "Big cuttlebone in the sky", and we thought no more about the Kids Club until the following January when a birthday card arrived for the late, lamented DB and It occurred to us that it might be time to end our little charade. We ruminated on the possible repercussions: What if they had a drawing and he won something? Like a scholarship to MIT? 10 We knew it D.B Himself
was time to come clean, but how? We toyed briefly with the idea of following the old admonition "When all else fails, try the truth", but we quickly nixed that option. We were afraid if we admitted that, "We let him out of his cage in the back yard and a hawk ate him", we might be charged with child abuse. So we asked ourselves, "What would 'Dubya" do?" We sent the card back marked "No longer at this address." 10 My son, the engineer. In closing, I wish you all the best, or, as Senorita Casa might have put it: "Salud, amor y dinero", which, if I remember correctly, translates to: "I would love salad with dinner". Tom P.S.: With the exception of attempts at humor, I normally avoid hyperbole, but I really believe that our years at Walnut Hills may very well have represented not only the apogee of the "Rise and Fall of the American Empire", but the high point of civilization on Earth. I’ve long believed that when historians do a Dow/Jones type chart of the aforementioned ascension/declension, the pinnacle will turn out to overlay our formative years. The WWII years and those shortly after probably saw this country at its best in terms of courage and character. Our parents thought nothing of letting us hop a bus to go to a night basketball game across town and people dutifully put their nickels in the canvas bags on the poles at bus stops before taking out a copy of the Enquirer. The ensuing years have seen an accumulation of national wealth accompanied by an erosion of values. Self absorption has become the norm and civility is seen as old fashioned. On the other hand, we have been fortunate to survive long enough to witness technological advances that would have been far-fetched in the science fiction comics of our day. Every time Ruth hooks up her digital camera to the computer and a few seconds later prints out an 8x10 that looks like it was just clipped from National Geographic I marvel that equipment that wasn’t available to any publishing house twenty years ago now sits on our desk, purchased on the Visa card which is automatically paid from our bank account. The synopsis? We were born early enough to see the character and class of one era and late enough to appreciate the scientific wonder of the next. The world will never again witness such an inflection point. I think Norma Brooks Eberle put it best when, in response to my first letter, she said succinctly, “We had the best of it all, even tho’ we didn’t have a clue.” -TF -8-