Long-term Improvement in Functional DyspepsiaUsing Hypnotherapy EMMA LOUISE CALVERT,* LESLEY ANNE HOUGHTON,* PATRICIA COOPER,* JULIE MORRIS,‡and PETER JAMES WHORWELL**Department of Medicine and ‡Department of Medical Statistics, Education and Research Centre, Wythenshawe Hospital,Southmoor Road, Manchester, United Kingdom Functional dyspepsia (FD) and irritable bowel syn- drome (IBS) account for more than 1⁄2 of the gastro- enterologist’s workload1 and are also the most commongastrointestinal problems seen in primary care settings.2 Background & Aims: We have shown hypnotherapy (HT) Although FD and IBS share some clinical features, they to be effective in irritable bowel syndrome, with long- can be distinguished symptomatically into 2 distinct term improvements in symptomatology andquality of entities.3 There is also probably some overlap in their life (QOL). This study aimed to assess the efﬁcacy of HT underlying pathophysiology, with abnormalities of both in functional dyspepsia (FD). Methods: A total of 126 FDpatients were randomized to HT, supportive therapy plus motility4 and visceral sensitivity5,6 likely contributory.
placebo medication, or medical treatment for 16 weeks.
The most recently accepted deﬁnition of FD (Rome II) Percentage change in symptomatology from baseline is recurrent (at least 12 weeks/year) epigastric pain with was assessedafter the 16-week treatment phase (short- no evidence of organic disease and associated upper ab- term) andafter 56 weeks (long-term) with 26 HT, 24 dominal bloating, early satiety, nausea, vomiting, and supportive therapy, and29 medical treatment patients feelings of fullness.3 It has been traditional to divide FD completing all phases of the study. QOL was measured into reﬂux-like, ulcer-like, dysmotility-like, and nonspe- as a secondary outcome. Results: Short-term symptom ciﬁc dyspepsia,7 although the clinical utility of this scores improvedmore in the HT group (median, 59%) classiﬁcation has been questioned.1 With respect to treat- than in the supportive (41%; P ؍ 0.01) or medical ment trials, there is little evidence that subgrouping is treatment (33%; P ؍ 0.057) groups. HT also beneﬁted helpful,3 although patients with reﬂux symptoms are QOL (42%) comparedwith either supportive therapy (10% [P < 0.001]) or medical treatment (11% [P <
FD is extremely common, affecting up to 25% of the 0.001]). Long-term, HT signiﬁcantly improvedsymptoms population.3,7,9 Unfortunately, there are even fewer ef- (73%) comparedwith supportive therapy (34% [P <
fective medications for this condition than for IBS, and 0.02]) or medical treatment (43% [P < 0.01]). QOL
those that are used, such as proton pump inhibitors and improvedsigniﬁcantly more with HT (44%) than with prokinetics, are expensive. This condition is very costly medical treatment (20% [P < 0.001]). QOL did improve
in both economic and social terms, as a result of these in the supportive therapy (43%) group, but 5 of these patients consulting frequently7 and taking time off patients commenced taking antidepressants during fol- work.9 The costs related to FD have recently been esti- low-up. A total of 90% of the patients in the medical mated to exceed $1.2 billion per year in the United treatment group and82% of the patients in the support- ive therapy group commenced medication during follow- We have previously shown that hypnotherapy (HT) is up, whereas none in the HT group did so (P < 0.001).
Those in the HT group visitedtheir general practitioner
extremely effective in treating IBS, leading to long-term or gastroenterologist signiﬁcantly less (median, 1) than improvement of symptoms and quality of life,10–12 and did those in the supportive therapy (median, 4) andmedical treatment (median, 4) groups during follow-up Abbreviations used in this paper: FD, functional dyspepsia; HAD, (P < 0.001). Conclusions: HT is highly effective in the
hospital anxiety anddepression; HT, hypnotherapy; IBS, irritable bowel long-term management of FD. Furthermore, the dra- 2002 by the American Gastroenterological Association matic reduction in medication use and consultation rate 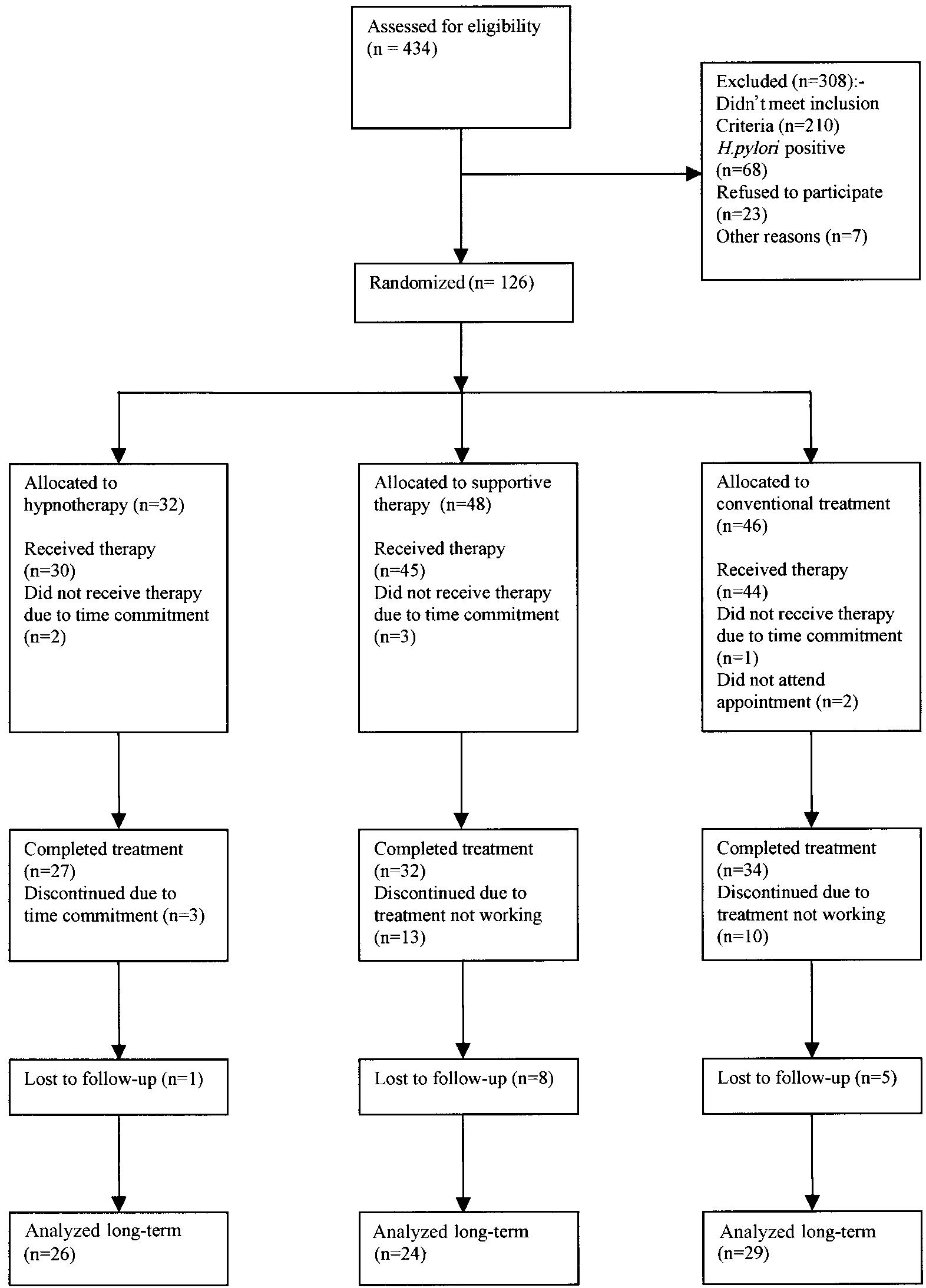 Figure 2. Study ﬂow diagram.
Reprinted with permission fromDepartment of Medical Illus-tration, Withington Hospital,Manchester, England.
control groups and to maintain equal numbers of pa- group. To control for any variations in scores, percentage tients entering the follow-up phase of the study, more change rather than actual score was used for statistical patients were randomized to receive the control thera- comparisons. Table 2 gives the actual scores obtained for pies. Fourteen (11%) patients were lost during the fol- total symptoms and QOL at baseline, the end of treat- Table 1 summarizes the initial total symptom and Figure 3 shows a comparison of the primary out- QOL scores and their individual components for each come measure (total symptom score) for the 3 groups at Table 1. Patient Symptom and Quality of Life Scores Before Entering Into the Study NOTE. Expressed as median (interquartile range).
Reprinted with permission from Department of Medical Illustration, Withington Hospital, Manchester, England.
all time points during the course of the study. As can be signiﬁcantly improved following HT compared with the seen, a highly signiﬁcant improvement in symptoms occurred in the HT patients compared with the other 2groups by the end of the short-term phase, and this was Figure 5 shows a comparison of the total QOL Short-Term. Figure 4 illustrates the percentage scores for the 3 groups at all time points during the improvement in all symptoms at the end of the short- course of the study. QOL signiﬁcantly improved in the term phase. HT improved total symptom scores [per- HT group compared with the other 2 groups in the centage improvement, median (IQR) 59% (26%– 85%)] short-term. However, in the long-term, although HT more than either supportive [40.7% (10%–59%); P ϭ signiﬁcantly improved QOL compared with medical 0.057] or medical [33% (Ϫ27% to Ϫ47.8%); P ϭ 0.01] treatment, the supportive group did exhibit a slow im- therapy. Signiﬁcant differences favoring HT for the in- provement over time. A likely explanation for the unex- pected improvement in QOL in the supportive group Long-term. At the end of the follow-up phase, was that 5 patients in this group (compared with none in patients receiving HT were signiﬁcantly improved for the other control group) began taking antidepressants the primary outcome measure [73% (26%–96%)] com- during the follow-up phase, as shown in Table 3, which pared with either of the other 2 control groups [support- led to an improvement of this parameter.
ive, 34% (Ϫ24%–71%), P Ͻ 0.02; medical, 43% Short-term. Figure 6 illustrates the percentage (15%–57%), P Ͻ 0.01]. In addition, all of the individual improvement in all components of QOL at the end of the symptoms with the sole exception of nausea remained short-term phase. As can be seen, this was signiﬁcantly Table 2. Scores for Total Symptoms and Quality of Life at Baseline and the End of the Short- and Long-Term Phases NOTE. Expressed as median (interquartile range). Reprinted with permission from Department of Medical Illustration, Withington Hospital,Manchester, England. 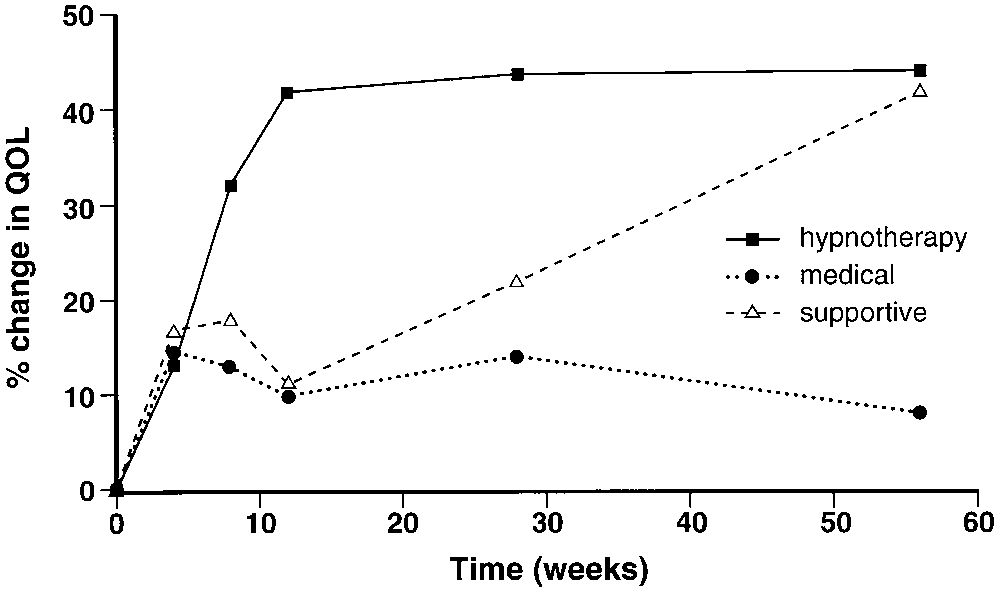 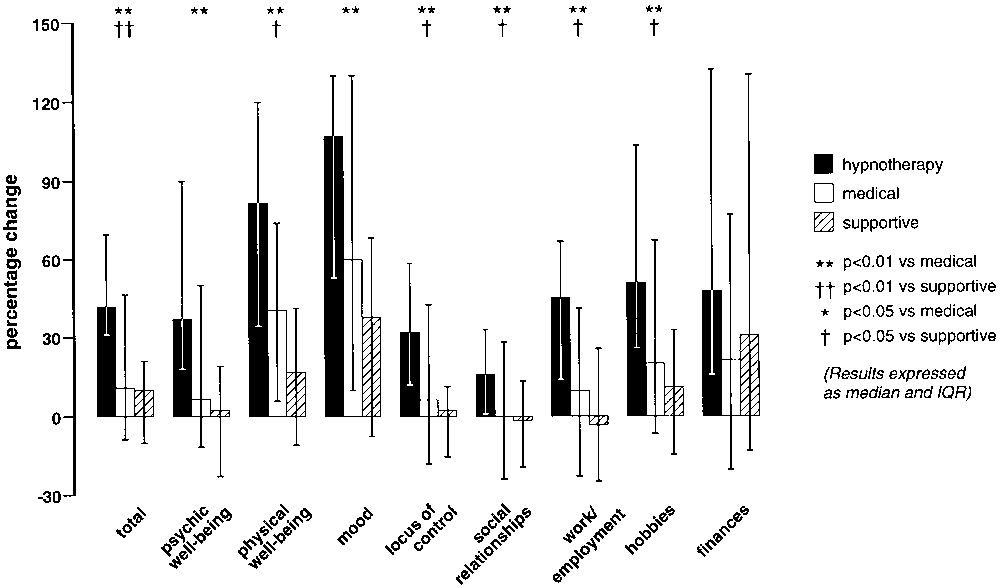 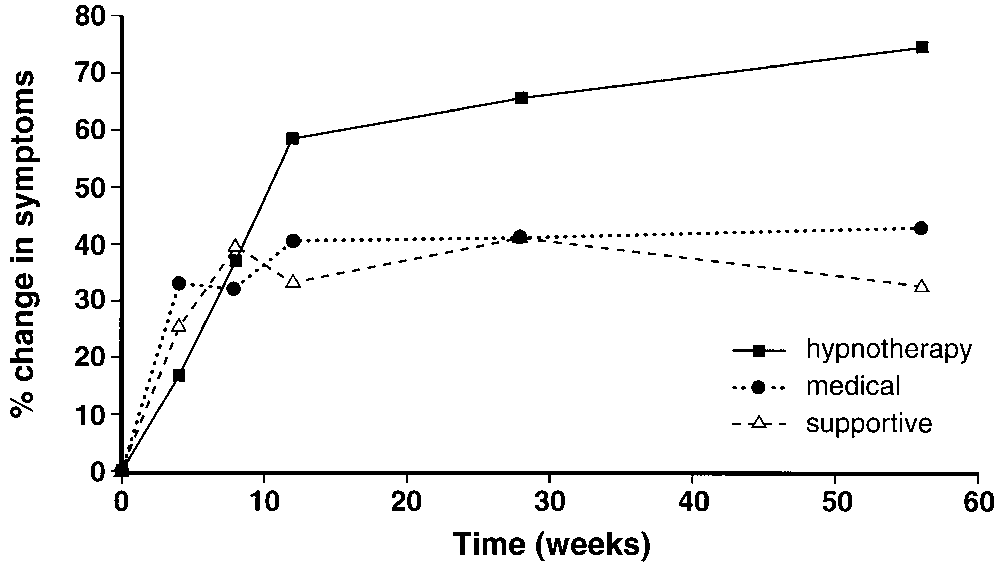 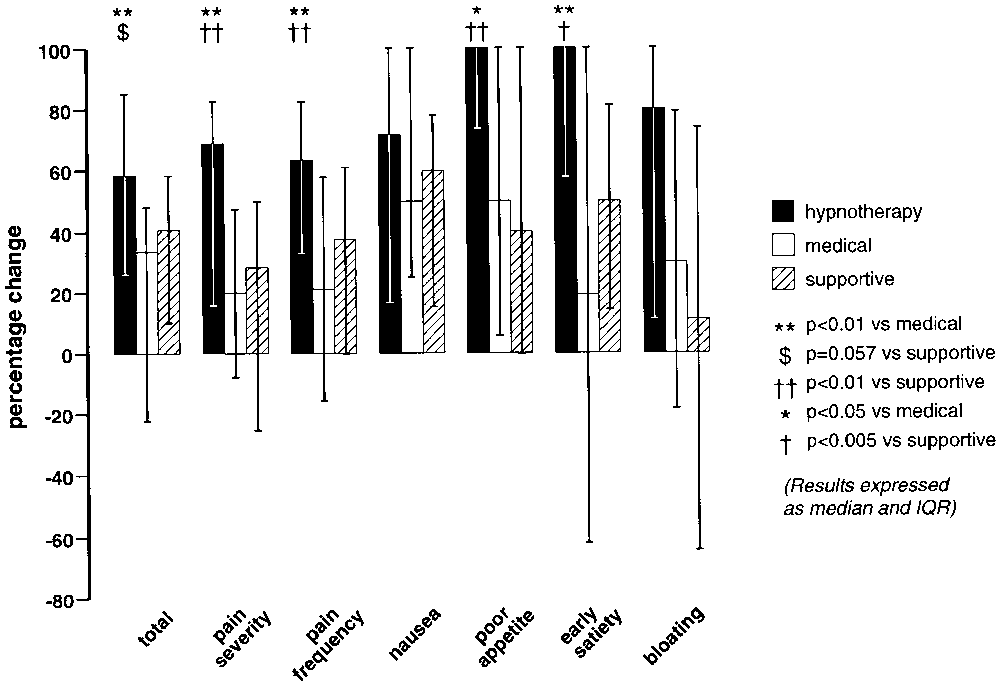