Cannabinoids for the treatment of movement disorders

Cannabinoids for the Treatment of Movement Disorders
Catherine O’Neill, BA and Juan Sanchez-Ramos, MD Cannabis has been used to treat a wide range of medical conditions by many cultures for thousands of years. The first written records of therapeutic use of cannabis were found in Egyptian medical papyri dating from approximately 1700 BC. An excellent historical review of the medicinal use of cannabis has recently been published (Russo, 2007). The first description of cannabis to specifically treat muscle spasms was in the writings of Al-Kindi in the ninth century AD. Almost one thousand years later, cannabis extracts were used to increase survival from tetanus in India, and the use of cannabis preparations as muscle relaxants and anti-spasmodics became prevalent in Britain and North America (Russo, 2007). A supply of cannabis herbal material (in the form of “Squire’s Extract”, a tincture of Indian hemp) was brought to England from Calcutta by a British physician who provided this to other practitioners in the British Isles. The use of tincture of Indian hemp to treat the tremor of Parkinson’s Disease was first described by Sir William Gowers in his landmark textbook of Neurology published in the late nineteenth “In one case tremor had commenced in the right arm and leg an hour after a railway accident and extended, three months later into the left arm. Two years subsequently there was a constant lateral movement at the writst joints, but no tremor of the fingers. A great improvement occurred on Indian hemp and a year later the tremor had almost ceased, being occasional only.” Plant Cannabinoids, Endocannabinoids and Cannabinoid Receptors in the Brain
Cannabis contains around 60 related molecules, the phytocannabinoids (plant cannabinoids). What purpose these molecules serve for the plant itself is not really understood. Cannabinoids are seen by some researchers as by-products of intermediary metabolism with no specific function in the plant. However, they may serve to repel destructive insects and to attract others (e.g., to lure bees for cross-pollination). Some cannabinoids may possess physiological properties involved in the regulation of plant growth and sexual development. Unlike many biologically active plant compounds (plant alkaloids), cannabinoids contain no nitrogen. In contrast to the paucity of information regarding the function of cannabinoids in plants, the actions of this compound in the human brain are much better understood. Tetrahydrocannabinol (THC) is the predominant plant cannabinoid (CB) responsible for actions on the nervous system. The actions triggered by the binding of THC with specific cannabinoid receptors mediate the neurologic and psychoactive effects. Cannabinol (CBN) is a metabolite of THC and also mediates mild psychoactive effects. Identification of brain receptors with which cannabinoids interact stimulated the quest for the brain’s own cannabis-like drug, or endogenous cannabinoid (endocannabinoid). After many years of research, the elusive endogenous cannabinoid was identified as arachidonyl ethanolamide and named anandamide. The molecule is found in nearly all tissues in many animals. Anandamide binds to both types of CB receptors, the CB1 receptor found in the central nervous system and the CB2 receptors distributed in peripheral tissues. Anandamide is derived from fatty acid metabolism and serves as a “lipid messenger” that activates the CB receptors on nearby cells. Although its pharmacological properties are similar to THC, its chemical structure Distribution of Cannabinoid Receptors in Basal Ganglia
The cannabinoid receptor has been shown to be heavily distributed in the basal ganglia of the brain (Egertova, 2000). The basal ganglia is a term that refers to a set of interconnected deep grey matter structures in the brain responsible for the automatic execution of learned motor programs (See Figure 1). Dysfunction of the basal ganglia results in diseases characterized by involuntary movements or difficulties in initiating or terminating movement. A prototype of a basal ganglia disease is Paralysis agitans (Parkinson’s disease) which is characterized by slowness of movement, rigidity of muscles, tremors and loss of balance. Another example is Huntington’s chorea, a hereditary neurodegenerative disease known by its involuntary movements that gradually worsen from tic-like jerks of muscles to complex dance-like 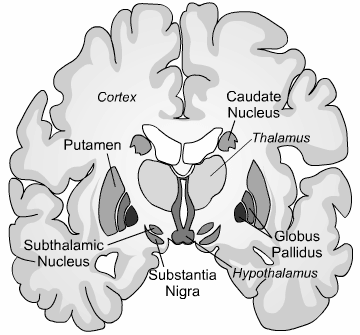