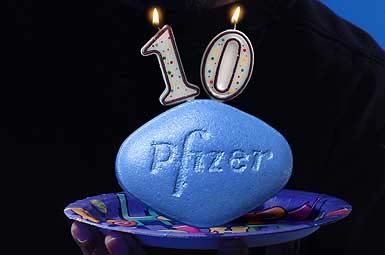 Little Blue Pill Is Growing Up - Viagra Turns 10
Viagra is so ingrained in pop culture, we forget it has only been around for 10 years. It's a punch line, an icon, the star of TV commercials that once evoked embarrassed chuckles. Viagra - the little blue pill celebrating its 10th birthday - continues to pack a potent punch, and not only in the bedroom. It and other erectile dysfunction drugs have become ingrained in pop culture and, as a result, may be changing how a nation of men thinks and acts on issues of health. "They've done a real service to men's health," says Scott Williams, a spokesman for the Men's Health Network advocacy group of Viagra and its two younger competitors, Levitra and Cialis. Interest in these medications serves as a portal to other men's health issues, such as high cholesterol, high blood pressure, diabetes and cardiovascular disease because it gets men talking to their doctor, Williams says. About 70 percent of the time, erectile dysfunction, or ED, "is the outward sign that there's something else going on inside." Doctors at the Mayo Clinic agree. The clinic last month published a paper suggesting a connection between ED and heart disease. "Seeing your doctor for erectile dysfunction may have a silver lining," they say. Such links make sense if you look at the roots of the now famous diamond-shaped pill. Researchers for Pfizer pharmaceuticals were testing compounds to treat high blood pressure and cardiovascular chest pain when they discovered their volunteers developed an unintended side effect: erections. The reason: the drug enhanced the effects of nitric oxide, a chemical that relaxes smooth muscles in the penis and allows for increased blood flow. Pfizer shifted gears and asked the Food and Drug Administration to consider the drug for the medical treatment of erectile dysfunction - a condition affecting 15 million to 30 million American men, says the National Institutes of Health. Its approval as a prescription drug in 1998 created an immediate blockbuster. Within the first year, an estimated 2.6 million mentions of the drug were made during physician office visits, the National Ambulatory Medical Care Survey showed. Since then, 35 million men have popped a Viagra. It's unclear how many men are getting prescriptions for ED drugs from a physician, versus buying pills from one of the plethora of Internet sites that advertise them. Either way, they're being bought and used. In 2007, combined sales of Viagra, Levitra and Cialis totaled more than $3 billion. Viagra also is now approved for treating pulmonary hypertension. Salvatore Giorgianni, director of external relations when Pfizer introduced Viagra, says the drug triggered a sexual revolution much like the one ignited bywomen's contraceptive pills decades earlier. Pfizer's team knew there would be an immediate impact on pop culture and, sure enough, Jay Leno kicked it off with a joke on "The Tonight Show." Still, the product's image evolved from a playboy potion to an "enabling technology," he says. That's reinforced by the evolution of the product's marketing: advertisements are more likely to address sexual satisfaction in addition to erectile dysfunction. "The same generation interested in birth control pills and women's reproductive rights is the same generation involved in another huge sea change in sexual health," says Giorgianni, now an assistant professor at the school of pharmacy at Belmont University in Nashville. That generation's interest in sexual freedom forced the medical community to validate the drugs as a legitimate treatment option. The men taking Viagra, Cialis and Levitra presumably are mostly older. As many as 14 percent of sexually active older men may be using sexual enhancement drugs, says a 2007 New England Journal of Medicine report on a large-scale study of sex among older adults. But the FDA, researchers and other government agencies have been aware for years of the drugs' popularity among sexually healthy younger men and illicit drug users. These studies point to the potential dangers involved in mixing medications or abusing them. The FDA also urges men who take nitrate-based drugs or alpha-blockers for prostate enlargement or high blood pressure to avoid taking Viagra and the like. There also are potential negative side effects on the relational side. Author Cyndi Targosz conducted a survey for her upcoming book "Dating the Younger Man," and found women complained if a sexually healthy partner was using a drug like Viagra for "recreational" purposes. The women said it made the experience less natural, regardless of whether the partner was a younger or older man. "My major issue is that that it's misused by men who think more is better. More is not better," Targosz says. "They are doing a disservice to themselves and their women. The men are not aware that the pleasure for a woman is not just about this hard thing." Targosz blames the pharmaceutical companies that relentlessly promote ED drugs.

"I believe it's put a lot of pressure on men the way women feel pressure to get implants for their breasts," she says. There's bound to be negatives with the introduction of a new drug, especially one associated with sex, Giorgianni says. He wasn't surprised that Viagra showed up on the Internet sites. "When you're selling sex, bad things can happen," he says. "We tried to stay focused on the medical condition as much as possible and away from the sensationalism." POP CULTURE PILL
Viagra is so ingrained in pop culture, we forget it's only been around 10 years. See if you recognize these faces and symbols of the famous erectile dysfunction drug. Bob Dole: the former U.S. senator and wounded war hero went public with a commercial campaign for Viagra. Viagra Ford: Nascar's Mark Martin races around the country in the No. 6 Roush Racing team car featuring the drug's logo. Rafael Palmeiro: The former Major League Baseball player was among several athletes who have hawked Viagra in recent years. Viagra Gold: The popularity of Viagra's iconic diamond shape appears in fine jewelry, such as this pendant
worn by one fan.
Find this article at:
http://www2.tbo.com/content/2008/jun/13/little-blue-pill-is-growing-up--viagra-turns-10
Check the box to include the list of links referenced in the article. 2008 Media General Inc. All Rights Reserved.

CHEM11041 Chemistry for the Life Sciences Assessment item 2 (weighting 10%) Due: 11th May, 2012 Please provide responses to the following questions using the Optical Mark Reader (OMR) form that will be supplied by your lecturers. You must follow the instruction that accompany the OMR form. You must attach a signed coversheet to your assessment item. The coversheet should be down