Serotonin_ what the gut feeds the bones _ science news 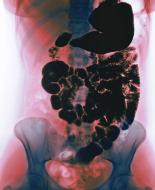 Serotonin: What The Gut Feeds The Bones / Science News http://www.sciencenews.org/view/feature/id/43994 SEROTONIN: WHAT THE GUT FEEDS THE BONES
Chemical messenger plays a surprising role in determining the
strength of the skeleton
A SURPRISE ROLE| Serotonin is produced in the small intestine (seenright, center in this X-ray image; stomach is upper right) and then carriedinto bone, where it affects bone formation and density.
The hip bone is connected to the backbone. The backbone is connected to theneck bone. And lately, scientists have begun to think that all dem bones maybe connected to the intestine — at least by biochemical signals. If the currentevidence holds up, it means that a chemical better known for influencing thebrain may also corrode the internal structure of the skeleton.
Such is the state of research into bone biology: “The more we understand, themore complex it gets,” says Clifford Rosen of the Maine Medical CenterResearch Institute in Scarborough. Rosen is one of a growing number ofresearchers who think that the brain, intestine and skeleton are conducting anongoing biochemical negotiation that affects the ebb and flow of tissue buildinginside bones. One of the chief currencies appears to be serotonin, aneurotransmitter most famous for its role in depression.
The idea that serotonin might be bad news for bones came as a surprisealmost a decade ago. And the notion that the intestine hosts a serotonin-bonecommand center — first described last fall — was more surprising still. “Itʼsthrown the field into a bit of an uproar,” says Michael Bliziotes of OregonHealth & Science University in Portland.
By eavesdropping on the crosstalk between the intestine and skeleton,researchers hope to find much-needed ways to help protect bones into oldage. More than 300,000 elderly Americans suffer hip fractures each year; onein five die within a year from complications of the injury. Bone-strengthening http://www.sciencenews.org/view/feature/id/43994/title/Serotonin_What_the_gut_feeds_the_bones

Serotonin: What The Gut Feeds The Bones / Science News in five die within a year from complications of the injury. Bone-strengtheningmedications have been hard to come by, largely because bone issimultaneously one of the most simple and most convoluted structures in thebody — brilliant and straightforward in engineering, yet owing its constructionto an elaborate relationship with internal organs.
Itʼs easy to perceive bones as dense and dead. But on the inside, bones arenot hard like blocks of wood, but airy, like sponges. The internal, honeycomb-like scaffolding allows bones to be sturdy without leaving them too heavy.
Strength isnʼt determined by density but by the makeup of the matrix within (inthe same way a china plate is denser than a plastic one but less likely tosurvive a drop on the floor).
Neither are bones dead. Throughout life, bones are constantly remodelingthemselves, constructing new tissue in some places, clearing out old bone inothers. As with hair or skin, worn bone  tissue is constantly replaced with newin what is called bone turnover. Bones generally reach their maximum strengthin early adulthood, after which they gradually wear away. After decades oferosion, bone density sometimes dips low enough to qualify as osteoporosis.
That disorder occurs largely because, as people age, cells that secrete newbone, called osteoblasts, donʼt work as robustly as osteoclasts, cells thatresorb or break down bone, especially in postmenopausal women. Mosttreatments for osteoporosis slow the loss of bone; the one drug that can buildbone costs thousands of dollars a year per patient and isnʼt prescribed as along-term option.
Nutrients and hormones — including vitamin D, calcium and estrogen — arecrucial to maintaining a favorable rate of bone turnover. Strength training alsotips the balance toward osteoblasts. These aspects of bone biology are clear.
But scientists acknowledge that much of the skeleton-building story remains amystery.
Unexpected connections
The link between serotonin and bones turned up, as scientific discoveries oftendo, when researchers were looking for something else altogether. In 2000,scientists at Duke University in Durham, N.C., were conducting studies onsubstance abuse with mice specifically bred to lack certain brain moleculescalled dopamine transporters, which interact with the neurotransmitterdopamine. The scientists noticed that the mice seemed to have extraordinarilybrittle bones. Bliziotes, an endocrinologist who had been collaborating with theDuke team, began to search for a biochemical explanation.
http://www.sciencenews.org/view/feature/id/43994/title/Serotonin_What_the_gut_feeds_the_bones

The Rap Sheet Legal News for Law Enforcement in Brevard and Seminole Counties June 2002 Volume XVIII, Issue 1 Message from Once again, I am pleased to provide you with State Attorney this issue of the Rap Sheet devoted to a Norm Wolfinger summary review of the legislation passed during the 2002 regular session of the Florida legislature. I hope that this review w