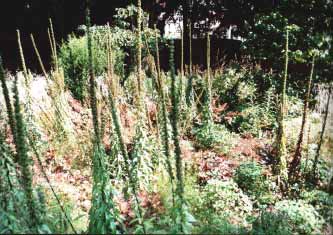 Imagine a herb rich road verge . . .
. containing perhaps meadowsweet, campion, cow-parsley and foxgloves; this will give you someidea of the effects created in some wonderful German gardens we visited recently. The naturalisticstyles of planting left us gasping for superlatives and inspired to create similar effects in our owngarden.
Hermanshof1 garden is in the centre of the small town of Weinheim which is to the north ofHeidelberg. The plantings vary widely from the traditional borders with the blocks of colour wemight expect to see in larger gardens in Britain to informal shade and prairie plantings. The wood-land areas use many European natives and are planted as one might expect to find on a woodlandfloor. Nature has been used to supply structural plants, which include Digitalis ferruginea andcimicifugas. These have been intermixed with appropriate shade lovers - some geraniums, helle-bores, cyclamen, aquilegia, and anemones. The individual plants are not so important as the overalleffect. No blocks of plants here but a continuous sward with the same species repeated right acrossthe planted area and all held together with some strong elements of shape - during summer the tallspikes of foxgloves. To be effective, of course, the plants have to thrive in the conditions in whichthey are grown.
Spikes of Digitalis ferruginea gigantea still provide interest after flowering in this shaded area at Hermanshof.
But the garden is probably best known for its prairie plantings. These are in more open conditionsalthough not as open as we had anticipated; they are, in effect, in a woodland clearing. Plantshave been used from across Europe and the steppes of Asia but it is the Americas which providethe lions share of the species used.
Verbena hastata, Lobelia fulgens, annual and perennial rudbeckias including Rudbeckiasubtomentosa, R amplexicaulis, the yellow daisies of Grindelia squarrosa, cleomes, the stunninglemon Ratabida pinnata, Monarda punctata, Lythrum virgatum and species asters such as Asterdivericatus are all used here. This colourful matrix is held together by a structural backbone ofVerbena bonariensis. While the hard winters mean that the verbena is not hardy, it self-seeds veryeffectively. The effect created is not unlike an impressionist’s painting - blobs of bright colours 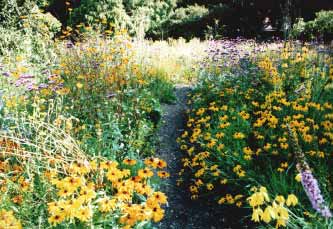 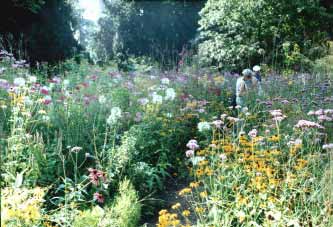 suspended in space. This is clearly very popular because, in the few short hours while we werethere, many photographers sought to capture the essence to enjoy at home. To find fault; a fewplants were a little too clumpy or had flowers which are just too large to blend in well - notablycultivated forms of Echinacea purpurea but the overall effect is quite stunning.
Narrow paths through the plantings at Hermanshof allow inti- mate contact. The large flowers and clumpy habit of the annual rudbeckia (front left) looks rather out of place.
At Hermanshof this experimentation with mixed plantings has been extended further in the moreformal context of annual bedding. One mixed border uses the same verbenas, adds the whitefoxtails of Pennisetum villosum and is punctuated by a few heads of cleome. Similar effects areused in many excellent municipal plantings across Germany and France. In Britain we are familiarwith the shapeless mounds of colour supplied by petunias and busy lizzies which plant breedershave stripped of any remaining charm. If you pass through Cherbourg in summer you cannot misstheir excellent examples which use tender perennials. No flat blobs here - these plantings havethree dimensions of structure, colour and texture.
Hermanshof- cleome, verbena, echinacea and rudbeckia. 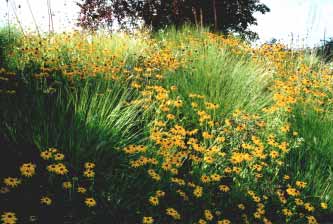 Getting back to Germany, our next stop was the experimental garden 100 miles to the south inNürtingen2. Again there were some impressive large border plantings using big blocks of colour butthis partly rocky site on a hillside lends itself to the use of low grasses and quite sparse plantings ofperennial rudbeckias, Monarda punctata, Origanum vulgare and low sub-shrubs including santolina,lavenders, and, favoured by bees, Perovskia abrotanoides. Rudbeckia sp and grasses take naturalistic planting one stage further on a rocky area of thin soils at Nürtingen.
Weihenstephan3 near Munich is home to a large experimental garden with many plant trials andgrowing techniques. The layout is in large display beds to illustrate various techniques but theplantings within the beds varies from formal plant trials to simulations of native habitats. The cli-mate is hard with very cold winters and hot summers lengthened by the warm southerly Föhnwinds. These can last well into autumn and then suddenly disappear as temperatures dive wellbelow zero - one late autumn day can be +15o and the next -10oC.
The border mixes here again use Verbena bonariensis planted with Salvia patens and S uliginosabut all three are effectively annuals under these conditions. Other plants used include RudbeckiaGoldsturm and penstemons. Plantings are very varied but for structural grasses miscanthus andespecially Molinia caerulea ssp arundinacea forms excel.
The director of Weihenstephan Dr Bernd Hertle, generously spent a Saturday morning with us andexplained much about their methods. We were interested in the plantings through a gravel mulch.
The optimum thickness of gravel is about 5cm. This allows a limited amount of reseeding ofdesireable plants to take place but discourages excessive weed seed problems. The annual manage-ment does require skill. The whole area must be weeded through very carefully leaving as many ofthe desired seedlings as required but removing the unwanted.
One area which was looking particularly effective in mid August was planted with shrubbyEuphorbia seguierana, Stachys Silver Carpet, Perovskia atriplicifolia, Nepeta Six Hills, AnaphilisSommerschnee, lavenders, Salvia officinalis, Calamintha nepetoides, Helictotrichon nepetoidesand Helichrysum italicum. All was planted at random and mulched with gravel. The effect washighly decorative in texture, colour and structure. Space was allowed so that, for example, whenthe Euphorbia seguierana sprawls it does not impact on nearby plants. 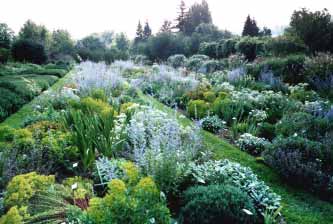 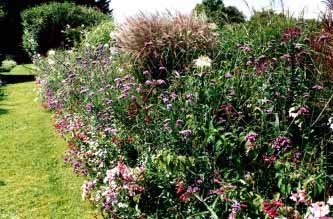 Perovskia atriplicifolia and Euphorbia seguierana are promi- nent in this Weihenstephan planting during August.
Hot summers and high light levels undoubtedly benefit the plantings, but the hard winters in centraland southern Germany (which cut Buddlejas down to the ground if they survive at all) restrict therange of plants which can be used and mean that some must be treated as annuals. Useful structuralcomponents which we might like to use such as Kniphofias, Crocosmias and Agapanthus are limitedin Bavaria to a few of the toughest forms.
With some creative adaption of the plants and avoiding those which depend on hot summers thereis tremendous potential for this innovative approach in Britain. The plants used are, with a fewexceptions, very close to species forms. The exceptions with proportionately larger flowers (annualrudbeckias, cleomes, and as mentioned earlier, echinaceas) just do not mix in a naturalistic context.
Penstemons and Verbenas with a backbone of Miscanthus at Weihenstephan. This mixed type of planting is frequently used And what for us? Well our conditions are milder, wetter and less sunny and we garden on heavy clay.
Some of the plants we’ve seen - Salvia uliginosa, Ratabida pinnata, the perennial rudbeckias andVerbena bonariensis perform quite well and we can probably use these in a sunny area we have inmind. Small flowered asters will help extend the season and Aster sedifolius nanus, A ericoidesforms and A laterifolius cultivars are all candidates. Grasses will need care - pennisetums may strug-gle on our soil but we are still tempted to try Pennisetum alopecuroides Woodside and the lovely purple foxtails of Pennisetum flaccidum are hard to resist even if it has to be planted every year.
Molinia arundinacea thrives and we will use more widely. Stipa calamagrostis may be a usefulalternative to provide vertical spikes should the Pennisetum flaccidum not be up to the job. Whatwe must strive to avoid is that keen plantpersons problem - using too many different plants andending up with a structureless mish mash, albeit of delightful plants! The gravel is already in place and the habitat modifying effects will help. On frosty nights surfacetemperatures on the gravel are regularly 2OC lower than on grass and on sunny days several degreeswarmer. The higher temperatures in sunny weathermay also help reduce the humidity. These twofactors must surely help improve the shape of sages, Cistus and other sunlovers which resent ourcool summers and mild winters. We have had success elsewhere in creating native meadow typeplantings using plants grown in situ from seed. Here low nutrient levels are the key, and these“meadows” are never fertilised because we want short plants which remain upright and no rankgrowth which collapses and kills the less vigorous plants.
For a deliberately wet area we’re planning I have in mind Helenium flexuosum (a fairly short spe-cies), crocosmias and salad burnet (Sanguisorbia minor). Purple loosestrife forms (Lythrum salicaria& L virgatum) should also work well in moist meadow conditions. This selection of later floweringperennials will be planted into a slow growing sward of native grasses particularly crested dog’s tail(Cynosurus cristatus) which is ornamental in it’s own right yet of modest vigour so will not supressthe desired plants. The area will then be mown up until, say, early May and then allowed to flower.
Will it work? Well, I think it will. The late mowing will reduce the heights of the perennials yethelp control annual weeds. It will delay the flowering by a few weeks to hit a midsummer peak.
Whether it works or not it’s certainly great fun trying! Martin and Sue Proud run Sampford Shrubs nursery and Holbrook Garden in Devon.
1. Hermanshof in Weinheim (near Heidelburg). Garden right in centre of town. Babostraße 5, 69469Weinheim Phone +49(0)6201-13652.
2. Nürtingen Lehr- und Versuchsgärten Landschaftarchitektur, Schelmenwasen 6, 72622 NürtingenPhone +49(0)7022-404188 3. Sichtungsgarten Weihenstephan Am Staudengarten 7, 85350 Freising Tel: +49(0)8161 713 371 You can use the 5 digit postcodes above to obtain a map from www.multimap.com. I’ve put fur-ther information at www.helenium.net/garden.htm