REFERATE GENERALE
GENERAL REPORTS
DERMATOZE DE SARCINÃ
DERMATOSES OF PREGNANCY
C. STOIAN, RALUCA ANDREEA VLÃDUÞÃ, ELENA DINA, IONELA MANOLE, MARIA MAGDALENA CONSTANTIN, CARMEN CUREA, G.-S. ÞIPLICA Sarcina poate fi insotita de modificari fiziologice sau The pregnancy can be adjoined by physiological or patologice la nivelul pielii. Unele dintre ele sunt influentate pathological changes in the skin. Some of them are de profilul hormonal diferit la femeia gravida. Modificarile determined by particular hormonal profile of pregnancy. fiziologice pot fi pigmentare, vasculare, modificari ce tin de Physiologic changes can be pigmentary, vascular, hair and fanere sau modificari structurale ale pielii. Dermatozele nails changes and structural changes of the skin. The care pot afecta femeia gravida se impart in doua categorii. dermatoses that can appear in the pregnant women fall in Prima categorie este cea a bolilor care apar pentru prima two categories. The firs category is that of diseases that oara in sarcina si sunt specifice sarcinii. A doua categorie appear for the first time in pregnancy and are specific to este cea a bolilor preexistente sarcinii, care isi modifica pregnancy. The second category is that of preexisting conditions, that get better or worse during pregnancy. Cuvinte cheie: sarcina, melasma, herpes gestationis,
Key-words: pregnancy, melasma, herpes gestationis,
impetigo herpetiformis, prurigo de sarcina. impetigo herpetiformis, prurigo of pregnancy Introduction
A. Physiologic changes (2)
moments in a woman’s life. In this period occurs reactions. Because of this variations, pregnant women experiences different changes and some of this can induce cutaneous disorders known as pathogenesis is unknown. This skin changes can be divided in: physiologic changes, dermatoses specific to pregnancy and diseases exacerbated or * Clinica Dermatologie II, Spitalul Clinic Colentina, Bucureºti.
Dermatology Clinic II Colentina, Clinical Hospital, Bucharest.
estrogen hormones are implicated in progress Pyogenic granuloma is a tumor consisting of
vascular tissue most frequent in trauma areas . It can affect the pregnant women. The clinical appearance is a red-purple sesile or pedun- culated tumor located on the face, mucous membranes or digits, soft on palpation, coveredwith crusts. The treatment consists in surgical Melasma, named also the mask of pregnancy,
excision deep enough (to prevent the recurence) is a specific hypermelanosis more pronounced in darker-skinned women which usually appears in the second trimester of pregnancy. It is localized Varicose veins affect up to 40% of pregnant
more often over the forehead, chicks and upper women. Venous dilation can appear on the calf, lip. There is a clear hormonal influence as in the rectum or vagina. They are caused by melasma can be produced or exacerbated by oral contraceptives. The exposure to ultraviolet pressure. When venous dilations occur, legs radiation worse the hyperpigmentation. It must be elevated. Usually, the varicosities remits usually regresses by one year after delivery but in after delivery, but in some cases, sclerotherapy is persistent forms it needs treatment (topical: hidroxicloroquine, tretinoin, non-ablative laser Cutis marmorata is a transitory blushing as a
response to cold because of the increased Palmar erythema develops in the first
trimester of pregnancy. It is caused by hyper- estrogenemia which characterizes the pregnancy.
instability. It is localized on the lower extremities Clinically it’s characterized by erythema of the and usually regresses after delivery (7).
thenar and hypothenar eminences. It usually Telogen effluvium can appear as a
consequence of pregnancy. A great number of Spider nevi appears more common in white
hairs enter in telogen phase, so the hair shedding women at the end of first trimester of pregnancy.
increase. The excessive hair shedding usually It is localized on the draining areas of the stops in a few months and hair density comes superior vena cava, meaning especially on the face, and upper limbs. They usually disappear Hirsutisme is observed early in pregnancy,
after delivery but when they persist a treatment by electrocauterysation or laser ablation can be more pronounced on the face and arms. It usually disappears at six months after delivery (2). Pigmentations of the nipples, areolae and
Nails become more fragile and soften, with
linea alba appears early during pregnancy and an increased growth, distal onycholysis and they are sometimes adjoined by slight hyper- pigmentation of others areas such as axilae and Striae gravidarum
inguinal region. Linea alba becomes linea nigra problem in pregnancy and is localized on the and also the secondary areolae appears. After abdomen, breast, arms, buttocks and thighs. It delivery, the hyperpigmentations tends to seems to be related more with genetic factors and disappear, but usually the skin does not return to Darkening of nevi and ephelides can
Molluscum fibrosum is a soft tisue fibroma,
become more intense in pregnancy, may enlarge skin-colored, or hiperpigmented, can reach a few or can appear new ones. It’s recommended a centimeters in size and appears frequently strict surveillance concerning this nevus because during pregnancy. The treatment consists in we don’t know for sure in what measure the 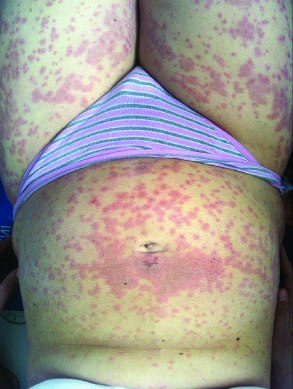 B. Dermatoses specific to pregnancy
many women have increased titers of immuno-globulin E. This prurigo of pregnancy is often confused with scabies, but does not respond to inflamatory dermatoses: pemphigoid (herpes) antiscabetic agents. In order to treat this gestationis, polymorphic eruption of pregnancy, condition, topical steroids are administered in prurigo of pregnancy and pruritic folliculitis of association with antihistamines (12).
A particular form of prurigo is represented by Herpes gestationis appears especially in the
cholestasis of pregnancy. Cholestasis of preg-
late period of pregnancy. The pathophysiology of nancy is a disease chararcterized by cholestasis this bullous disease consists in appearance of that appears during second or third trimester of autoantibodies (Ig G1) against NC 16 segment of BP 180, which are meet in a genetic predisposed hormonal changes that appear during pregnancy women. The placenta may play a major role.
in one organism which is predisposed can lead to There are important associations with other cholestasis. The clinical presentation is with autoimmune diseases such as: Grave’s disease, pruritus that begins usually in second or third Hashimoto thyroiditis, pernicious anemia. The trimester. The pruritus can be accompanied by patients present severe pruritus followed by jaundice or others systemic manifestations. In the urticaria-like and bullous lesions eruption first place the pruritus is localized on palms and located on the abdomen, palms and soles. The soles. The symptoms disappears after birth, but they can appear during contraceptives intake. In fluorescence. The autoantibodies can be detected in serum with indirect immunofluorscence. Thisdisease can predispose to premature delivery andsmall for gestational age child. The treatment isused in order to ameliorate pruritus and preventnew blister formation. It includes glucocorticoidsin small doses (prednisone 20-60 mg/orally) (11).
Polymorphic eruption of pregnancy (figure
1) is known also as pruritic urticarial papules andplaques of pregnancy (PUPPP). It appears in thethird trimester and affects mainly the primi-gravidae. It is considered to appear as aconsequence of damage to connective tissuecaused by abdominal distension or by fetalantigens. The tegumentary eruption is re-presented by erythematous papules whichevolves into urticarial plaques. It is located on theabdomen, buttocks, thighs and rarely involvesthe face, breast or palms. In general, thisdermatose does not require any treatment. Insome cases, a high-potency topical steroid mayrelieve the pruritus. Only the severe cases need ashort course of oral prednisone (12).
Prurigo of pregnancy (prurigo Besnier) is a
disorder which appears in the second trimester ofpregnancy. It is characterized by pruritic, ery-thematous papules that are seen in symmetric Figure 1. Pruritic urticarial papules of pregnancy appeared distribution, especially on the trunk and extensor surfaces of the extremities. It is suspected to be Figura 1. Papule urticariene pruriginoase ale sarcinii au associated with atopy, taking into account that apãrut 5 zile înainte de livrare 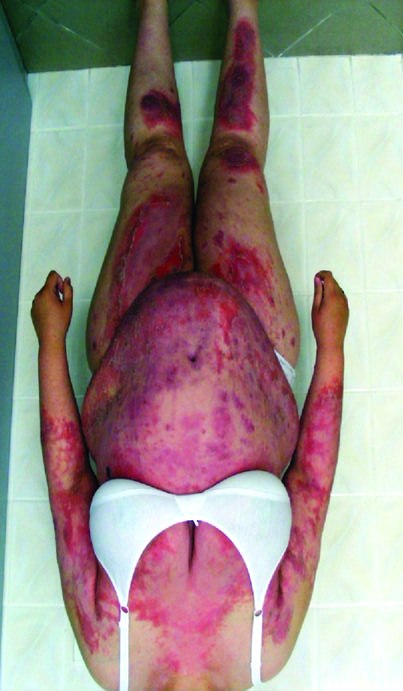