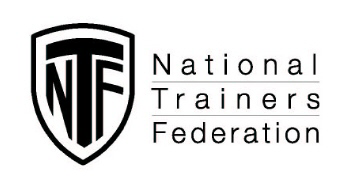 The Medication Control Forum took place on 8th December 2009 at the Newmarket
Equine Hospital. The purpose of the event was to open up communications between
trainers, the BHA and HFL Sports Science and to answer some specific questions
compiled by the NTF fol owing trainer feedback.
Short presentations were given by Jim Boyle (NTF Council member), Clive Hamblin
(NTF Veterinary Adviser), Tim Morris (BHA Director of Equine Science and Welfare),
Paul Beeby (BHA Head of Intelligence), Steve Maynard (HFL Sports Science) and Lyn
Hillyer (BHA Veterinary Adviser – Medication). Each gave their perspective on
medication control.
Answers to the key questions

1. Why are some substances now detected longer after administration than they Tim Morris explained that Britain does not operate “zero tolerance”; it operates a policy of “no effect of medication on raceday”. Therefore, wherever possible, screening levels for substances are set so that a positive result is not called for a trace of medication that would not have affected performance. He revealed that screening levels are harmonised across Europe and converted into agreed Detection Times for publication. It was acknowledged that any discussion about changing screening levels currently took place only between HFL and BHA with a protocol that required medication control changes to be subsequently notified to trainers and vets. It was agreed that the NTF should in future be more directly involved in this process to address concerns that sensitivities were changed without notice. Lyn Hillyer described the new Centre for Racehorse Studies, based at the British Racing School, where a cohort of horses is being used solely for researching medication detection times for racehorses in training in order to provide more information for trainers. The BHA Board has recognised, through this expenditure, the importance of more Detection Times being produced for trainers and their vets. 2. Why do the rules prevent the administration of electrolytes on the day of the race President: John Hills Chief Executive: Rupert Arnold 9 High Street, Lambourn, Hungerford, Berkshire RG17 8XN Telephone: +44 (0) 1488 71719 Facsimile: +44 (0) 1488 73005 Email: [email protected] www.racehorsetrainers.org The scientific advice is that under normal circumstances, the administration of electrolytes before a race is contra-indicated. If a horse needs rehydration, it is more effectively achieved through giving drinking water regularly and a dose of electrolytes would draw fluid out of the horse’s system. However, Tim Morris said that in extreme circumstances (for example this summer’s heat wave), it is possible that administration of electrolytes (in water or intravenously) would be the right course of action and, as long as permission was requested, Veterinary Officers are clearly allowed to permit electrolytes to be given pre-race. 3. Should there be a threshold level for morphine, when it is a naturally occurring There is already a screening level for morphine to ensure that only clearly detectable ‘chemical fingerprints’ are reported as positive. The risk of feed contamination by naturally occurring morphine has been addressed through the British Equestrian Trades Association Feed Assurance Scheme for Natural y Occurring Prohibited Substances. (See NTF November 2009 Newsletter) In addition, an early warning system, where minute traces (incomplete ‘chemical fingerprints’) are found, is being put in place with the feed manufacturers and the BHA. 4. Should Omeprazole (trade name Gastroguard), for the treatment of gastric ulcers, be permitted for racing in the interests of horse welfare? Scientific studies show Omeprazole has no performance enhancing or masking effect. Therefore BHA now agrees that there is a persuasive argument for al owing Omeprazole (Gastroguard) to be used closer to raceday. It will actively seek rapid agreement amongst other members of the European Horseracing Scientific Liaison Committee to alter the screening level but undertook to take a unilateral approach if agreement could not be reached with other countries. The result would be no significant levels of the drug on raceday but continued anti-ulcer effect. 5. Are there any other substances that should be permitted for racing for welfare Again, the approach is not to “permit” drugs but set screening levels that recognise the lack of effect on performance. The other substance, which it was suggested might fall into the same category, was Sputolysin. Further research would be needed and feedback to BHA as to whether this was a priority. 6. What information should BHA provide to trainers about testing for specific HFL currently tests against a list of about 2000 different substances in its general screen. It would discuss with BHA whether any others should be added. In principle if a medication were added, trainers would be notified although clearly there would be no notification of a purely “doping” substance. Lynn Hillyer said that the warning sent out to trainers and their vets about the evidence and risks of administering Ranitidine showed that BHA’s intention was to provide information to help trainers.
Conclusions

The Forum was a significant step forward. As well as answering some key questions,
the Forum established
The BHA’s medication policy is primarily aimed at educating and informing trainers so that positive post-race tests can be avoided. Agreement over better communication between the BHA and trainers over medication issues, particularly any changes to testing procedures, such as screening levels Confirmation that Veterinary Officers wil permit electrolytes to be given to horses after travelling and before the race if the condition of the horse justifies it and permission is requested by the trainer or travelling staff BHA is actively seeking to alter screening levels such that the withdrawal period for Omeprazole (Gastroguard) can be significantly reduced BHA is willing to consider a charter or Memorandum of Understanding between itself and the NTF or Horsemen’s Group setting out the ground rules for medication control.