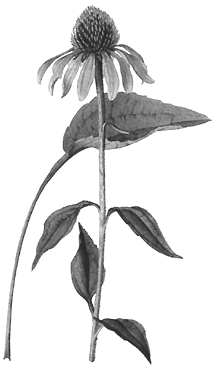 Echinacea purpurea - Purple Coneflower (Asteraceae) -------------------------------------------------------------------------------------------- Echinacea purpurea is a perennial for sunny to peduncles become fruiting stalks; in addition, the partially shady sites, with a distinctive array of receptacle is covered with prickly coarse scales summer-blooming pink-lavender or white-cream -best floral performance occurs by putting this flowers. The sometimes pendulous petals sit atop perennial in sites with morning sun followed by stiff, vertical peduncles that arise from a clump of afternoon shade, so that the petal colors will not bleach out in the intense afternoon heat and sunlight FEATURES
-each of the stiff flowering stalks has several flowers blooming over a month long period in July and early Aug., with occasional rebloom during late summer and early autumn, especially if deadheaded -seeds, as a unit, form a prominent central cone that turns gray in autumn, with seeds slowly shattering -performs best in evenly moist, well-drained soils of from the peduncle as the winter progresses (if not average fertility in partial sun, but is tolerant of full deadheaded or subjected to autumn cleanup), sun, heat, and drought (as long as a moderate amount therefore, the fruiting heads are not especially of petal bleaching and leaf scorching is expected) -propagated by clump division, root cuttings (not rooted stem cuttings, but cuttings from the peripheral Function
-Daisy Family, with minor foliage disease (leaf spot) -mass or group plantings, borders, entranceways, rear or pest (Japanese beetle) problems; however, leaf of the perennial bed, and naturalized prairie or scorch is the most common problem and often occurs woodland edge sites; also good for cut flowers -cut back dead stubble from the previous season's growth during late autumn, late winter, or early -heat and drought tolerant (although some leaf scorch -medium to dark green, either originating as a clump from the crown (basal leaves are up to 8" long) or -will slowly self-sow when placed in a neglected area alternating along the flowering stems (upper leaves Liabilities
-narrow ovate, coarsely dentate, scabrous (rough to -cosmetic leaf damage will result from leaf scorch, the touch), with a long tapering acute apex, and also leaf spots, and/or Japanese beetle feeding long-petioled (except for leaves on the upper stems), -older plants that have not been divided for about 3 with the petioles and stems having a purplish tinge yrs. will have some peduncle lodging as the leaves will wilt when under drought conditions, but flowering season progresses (these can conveniently -self-sowing can slowly become a problem in SELECTIONS
Alternates
-perennials with a medium-bold texture, upright growth habit, showy flowers, and cut-flower potential (Leucanthemum Superbum Group, Rudbeckia fulgida var. sullivantii 'Goldsturm', Sedum 'Herbstfreude' Variants
-'Crimson Star' - the most deeply pigmented crimson- lavender petals of any cultivar, with reddish central -'Magnus' - rose-lavender petals are held horizontally from the flowers, which are borne in profusion; 1998 Perennial Plant Association Plant of the Year -ray flowers ("petals") are lavender-pink (species ('Bravado' is a good substitute, if 'Magnus' is sold- form) or white (some cultivars), on inflorescences about 3" wide, with the petals either drooping -'White Swan' - white-cream petals, with golden- (species form) or held horizontally (most cultivars), green central disks; a very worthwhile choice since it while the central disk flowers are raised into a cone is one of the few showy white blooming perennials or dome shape, ranging from golden-purple to for mid- to late summer bloom; leaves, petioles, and peduncles are also a lighter green color; -the stout peduncles (flowering stalks, or "stems") unfortunately, this and other white-flowering join the swollen receptacles (the bases of each cultivars (e.g. 'Alba') are not as vigorous, floriferous, flower), creating a subtle inverted pyramidal shape at tall, or cold hardy as the pink flowering forms the juncture that is often unnoticed beneath the reflexed petals, but becomes more obvious as the