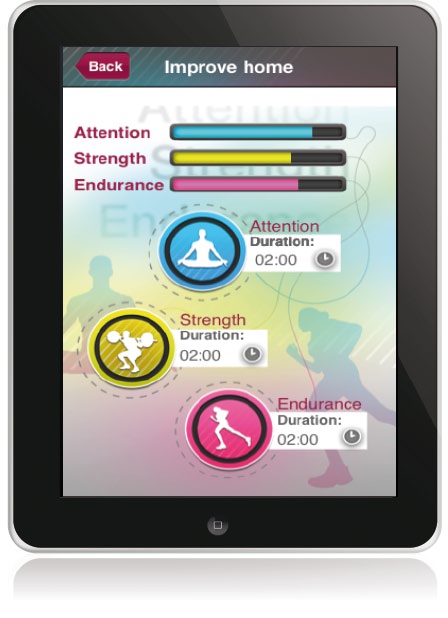 The Method – New and old Technology Assessment methods Serious game
How far would you go to become stronger, fitter or more competitive?
Ritalin for your child to improve its educational chances? A robotic arm to boost strength? With the Rathenau Instituut’s new human enhancement app you can put your ethics to the test.
spend time in training or use enhancements – mild and radical - to accomplish their mission.
These enhancements come at a price, though, mirroring real-life dilemmas. Ritalin is designed to improve concentration but are the side effects too risky? Deep brain stimulators are designed to improve moods, but what else do they do? What are the downsides of a superstrength robotic arm? Players are encouraged to think about the ethical dilemmas as they are interacting with the other Human enhancement technologies were originally developed as medical technologies for people with a disorder, but are increasingly being used by healthy people to improve performance or appearance. Well-known examples are Viagra and liposuction. In liberal Western countries, individuals can decide for themselves whether to use such enhancements or not. But what is the impact of these individual decisions for society as a whole? How does it change our ideas about what a normal human being is? And who has access to these technologies? What if a government The Rathenau Instituut, the technology and science uses enhancement technologies for collective goals, system assessment institute for the Dutch parliament, such as a safety and justice? Ira van Keulen: “Most of is launching their first iPhone app this winter: a the public debate has been about doping in sports. We game on human enhancement. “We want to reach wish to invite people to think about the broader trend new audiences, that we do not reach through more of healthy people using technologies to become smarter, traditional media”, explains senior researcher Ira fitter or more beautiful. After all, new technologies will van Keulen. The game is designed to encourage keep being developed – and people’s desire to improve players to think about the ethical dilemmas of human themselves will keep raising these issues.” enhancement. It’s a topic that reaches way beyond cosmetic surgery and doping for athletes: “Sooner or The game will be available in January, through the later, everyone will have to make choices about whether iTunes AppStore. You can stay up to date via to tinker with their appearance or performance. If only www.rathenau.nl.
The social game, which will be free of charge, offers players three missions to choose from. In the first, your child takes part in a competition to enter a top five university. In the second, players are scientists competing for research funding for a cancer vaccine. The third option is to be an elderly person who has to prove they are mentally and physically capable of living independently. A team of players can either

#1 Source for Health In Use and distribution of this article is subject to our Publisher Guidelines Health and Wellness whereby the original author's information and copyright must be included. Products Quit smoking by cutting down by Ciaran J Newman FIITD Giving up smoking by cutting down - a gradual reduction method. GRM (Gradual Reduction Method) is an alternative to