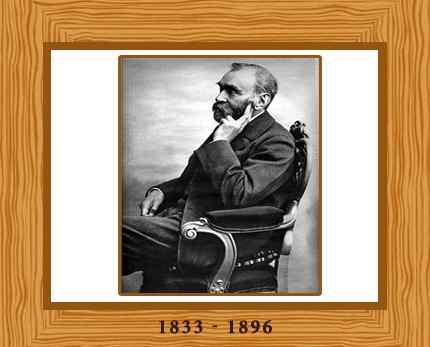 The foundation of the Nobel Prize-that has been honoring people from all around the world for their great accomplishments in physics, chemistry, medicine, literature, and for work in peace-was laid by none other than Alfred Nobel. He was a Swedish scientist, inventor, entrepreneur, author and pacifist. He was a great genius who invented dynamite and many other explosives. He also constructed companies and laboratories in more than 20 countries all over the world. Early Life:
Alfred Nobel was born on 21 October, 1833 in Stockholm, Sweden. He was the third out of the four sons to the Swedish family. His father, Immanuel Nobel, an engineer and a prosperous arms manufacturer, encouraged his four sons to pursue mechanical fields. When Alfred was just nine years old, his family moved to Saint Petersburg in 1842, where his father started a “torpedo” works. Here young Alfred received his early education by private tutors. He studied chemistry with Professor Nikolay Nikolaevich Zinin. At the age of 18 he traveled to United States where he spent four years studying chemistry and also worked for sometime under John Ericsson. During this time he also went to Paris where he was first introduced to nitroglycerin, a volatile, explosive liquid first made by an Italian scientist, Ascanio Sobrero in 1847. With the end of the war his father’s weapon’s business collapsed leaving the family poor. As a result the family had to rely on the earnings of his mother, Andriette Ahlsell Nobel who worked at the grocery store. Contributions and Achievements:
After the family business got bankrupt, Alfred devoted himself to the study of explosives and sought a way to make the aggressive explosion of liquid nitroglycerin somehow more controllable. In 1863 he succeeded in exploding nitroglycerin from a distance with a gunpowder charge, and two years later he patented the mercury fulminate detonator which is a critical component for the development of high explosives. Nobel then built up factories in Hamburg and Stockholm, and soon New York and California. Unfortunately his name became controversial after many serious accidents in the transit and use of his intrinsically unstable product, including an 1864 explosion at their factory in Heleneborg in Stockholm that killed Nobel’s younger brother Emil, among other casualties. In order to improve the image of his business, Nobel put all his efforts to produce a safer explosive. In 1866 he discovered that when nitroglycerin was incorporated in an absorbent still substance like kieselguhr (porous clay) it became safer and more convenient to handle. He called this mixture dynamite and received a patent in 1867. The same year he demonstrated his explosive for the first time at a quarry in Redhill, Surrey, England. After a few months he also developed a more powerful explosive by the name of ‘Gelignite’, (also called blasting gelatin). He made this by absorbing nitroglycerin into wood pulp and sodium or potassium nitrate. Later Life:
During November 1895, at the Swedish-Norwegian Club in Paris, Nobel signed his last will and testament and established the Nobel Prizes, to be awarded annually without distinction of nationality. The executors of his will formed the Nobel Foundation to fulfill his wishes. The statutes of the foundation were formally adopted on June 29, 1900 and the first prize was awarded in 1901. This great man died of a stroke on 10 December 1896 at Sanremo, Italy and was buried in Norra begravningsplatsen in Stockholm.