Meeting Report
48th Annual Meeting of the European Association for study of Diabetes From 1 October to 5 October at Germany(Berlin) presentation 4) Others (Please explain specifically below Metformin attenuates proteasome 26S activity and exerts tumor suppressing effects in human hepatoma cells 1. Summary of your presentation (Include what you learned from discussions with I made a poster presentation on Wednesday, October 3. The summary of my presentation Metformin is widely prescribed as an oral anti-hyperglycemic drug for treatment of type 2 diabetes, and metformin comes to the front by its anti-carcinogenic effect. Several clinical studies showed that metformin reduced the risk of liver cancer. But the detailed mechanisms are still unclear. Recent studies have suggested that mTOR signaling is involved in the anti-carcinogenic effect, and is regulated by the proteasome degradation The aim of this study was investigate the effect of metformin on cell proliferation and the role of the proteasome degradation system in liver cancer cells. In this study, we used HepG2 cells. Then we performed cell viability assay, cell cycle analysis, proteasome activity assay, and immunoblottings. We first confirmed the effect of metformin on cell proliferation. Metformin significantly reduced the cell viability and blocked cell cycle. Under the same condition, metformin significantly suppressed the proteasome activity. We next confirmed AMPK activation by metformin. We then performed AMPK silencing. The reducing effect of metformin on cell viability and suppressing effect on proteasome activity were attenuated by AMPK silencing. These results suggest that cell proliferation and proteasome activity are regulated by AMPK activation in HepG2 cells. We then evaluated mTOR signaling. P70-S6 kinase is one of downstam target of mTOR. Metformin suppressed phosphorylation of S6 kinase, suggesting metformin suppressed mTOR signaling. Same as Metformin, MG132, a proteasome inhibitor, strongly suppressed phosphorylation of S6 kinase. This result indicates proteasome activity has a role in mTOR We next evaluated one candidate molecule, DEPTOR. DEPTOR is known as mTOR inhibitory molecule which binds to mTOR. The protein level of DEPTOR is regulated by proteasome degradation system. So we performed immunoblotting of DEPTOR. The protein level of DEPTOR is increased in the presence of metofmin. Additionally, the volume of mTOR-DEPTOR binding increased in the presence of metformin. 1, We found that metformin suppressed proteasome activity through AMPK activation. 2, Our results indicate DEPTOR degradation is attenuated by the suppression of 3, This study suggests that increased DEPTOR highly binds to mTOR and suppresses mTOR signaling, consequently attenuates cell proliferation of HepG2 cells. After my presentation, I received some question and suggestion from audience. These are about AMPK silencing. AMPK consists of three subunits, α, β, and γ. Additionally, there are two isoforms in AMPKα, α1 and α2. We performed only AMPKα1 silencing. But several studies showed not only α1 but α2 is required for AMPK signaling. In this study, the reducing effect of metformin on cell viability and suppressing effect on proteasome activity were attenuated by only AMPKα1 silencing. As a future plan, we will investigate about AMPKα2, then we can confirm the cell proliferation and proteasome activity are regulated by AMPK activation in HepG2 cells. My current work is concerned with anti-carcinogenic effect of metformin in liver. So I participated in the symposium of “Diabetes and Cancer”. I expected to hear about novel mechanism of carcinogenesis among diabetic state. Although there are some reports about epidemiological data about diabetes and carcinogenesis, there is no session about molecular mechanism about carcinogenesis and diabetes. The detailed mechanisms about carcinogenesis among diabetic subjects are still unclear. So, I firmly believe our research helps finding new strategy for prevention and therapy of life style-related disease, including malignant neoplasm. Our works make a contribution to clarify the relationship between proteasome activity and mTOR signaling, as a common regulator of metabolic syndrome, diabetes, and neoplasm. This may also discover new therapeutic targets for impairment of glucose or lipid metabolism and carcinogenesis. On clinical session, I heard about metformin and risk of lactic acidosis. From the Swedish National Diabetes Register, results were consistent in patients with renal impairment, with no increased risk of acidosis. In clinical practice, the benefits of metformin use clearly outbalance the risk of severe side effects. These results support the less strict approach to metformin use in patients with renal impairment (eGFR 45-60 mL/min/1.73m2). 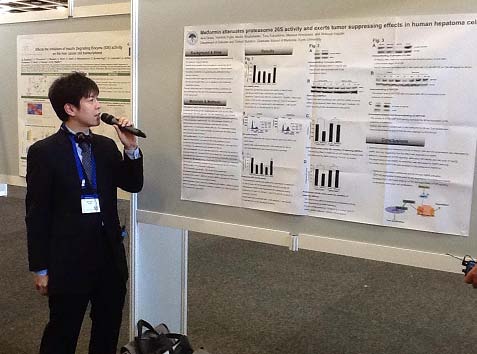 3. Your impression of the meeting (e.g., major trends in the field, status and contribution of your study and/or studies in Japan to the field, etc.) The annual meeting of the European Association for study of Diabetes (EASD) has more than 8,000 participants including basic researchers, medical doctors, and students from all over the world. Oral presentations and poster sessions also offer opportunities for investigators, especially for younger scientists, to present their work. Although there are some reports about epidemiological data about diabetes and carcinogenesis, there are still something unclear about molecular mechanism, carcinogenesis and diabetes. We need investigate the new strategy for prevention and therapy of life style-related disease, including malignant neoplasm. This was the first time for me to make a presentation at the international congress. I had a lot of meaningful comments at my presentation and interacted closely with diabetology professionals from all over the world. It was a very exciting and beautiful experience for me. It was a great honor to be able to attend such a wonderful meeting, so I would like to acknowledge the people who have been involved in this research. Finally, I would like to appreciate Global COE program for giving me this excellent opportunity.