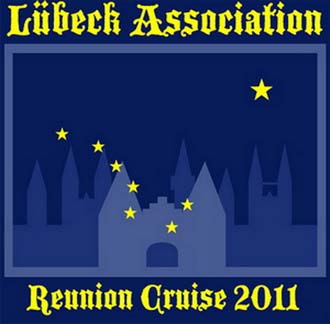 All of the above have been proudly added to the Lübeck Association Memorial Plaque.
Dues
It’s that time of year again, if you get anything out of what the Association does,
Reunions, Newsletter, Web Site, etc. Please send your $25 check to me. Make your
check out to the Lübeck Association, and send it to Jim Miller, 341 Kentfield Dr.
San Marcos, CA 92069.
The following folks are exempt, having remitted there dues earlier this year, or
have prepaid for several years:
Bill Bessel, Dick Phegley, Bernie McCollum, Bucky Harris, Fess Parker, Leonard Nack,
Jesse Ellisor, Frank Crane, and Renate Setten.
Again dues are voluntary, but much appreciated. Some of the other uses of your
funds in the past few years are:
Charities - In the name(s) of Dennis Whelan, Bruce Clement, Zeb Hadley & Don Bean
Flowers – Troy Willson’s widow
Red Cross – Hurricane Katrina
Have a very safe summer, be well, and hopefully we’ll see many of you for the
reunion in 2013. . .it’s gonna be big!

CODEX – THE SICKNESS INDU$TRY’s LAST STAND An Investigative full length feature Article Preamble What is CODEX? (34) In short it is an annual World Health Organisation (WHO) sponsored gathering of delegates in Europe, many of them trans-national pharmaceutical corporations who are primarily focused on increasing their market share, by pushing their desired and arbitrary regulatory