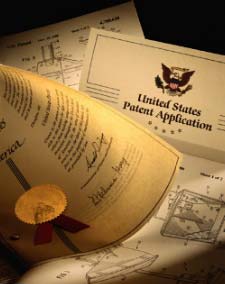 SmithKline Beecham Corp. v. Excel Pharms., Inc.
Nos. 02-1581 et al. (Fed. Cir. Jan. 29, 2004). “[N]ew matter prohibitions are not directly germane to the doctrine of equivalents or the patentee’s proof to
overcome the Festo presumption.”
On January 29, 2004, the Federal Circuit vacated and remanded the district court’s summary judgment that Excel did not infringe U.S. Patent No. 5,427,798, which related to controlled sustained release tablets containing bupropion hydrochloride. The infringement inquiry in this case depended on whether the prosecution history of the ‘798 patent foreclosed Glaxo’s reli-ance on the doctrine of equivalents The Federal Circuit stated: Glaxo amended claims 14-15 and 18-19 of the ‘798 patent to recite HPMC. Glaxo’s application did not disclose any other sustained release mechanism. Therefore, Glaxo’s disclosure of HPMC alone could not support a broad ge-neric claim to other sustained release mechanisms. Nonetheless Glaxo contends that this amendment did not sur-render other hydrogels equivalent to HPMC. Rather, Glaxo contends that it only added HPMC to the claims to distin-guish the sustained release agent in its invention from other disclosed excipients in the application. The examiner rejected originally filed claims 14-15 and 18-19 of the ‘798 patent for lack of enablement. [T]he ex- aminer considered the recitation of HPMC “critical” for the control ed or sustained release aspect of the claims. [T]he examiner required Glaxo to restrict the claims to a particular controlled drug release agent, i.e., HPMC. The claims as originally written embraced all control ed sustained release tablets comprising bupropion hydrochloride. The applica-tion did not enable any sustained release agents other than HPMC, however, because it only disclosed HPMC’s time release and plasma profiles. Indeed the original claims recited those profiles. The examiner expressly stated that only HPMC enabled claims with these profiles. The application did not enable one of skill in the art to make and use a broader genus of sustained release agents. Thus, the examiner’s enablement argument, which Glaxo did not rebut, shows that Glaxo surrendered other controlled sustained release agents known to act as equivalents of HPMC. . . . Because it could not have added PVA to its claims at the time of amendment (without drawing a new matter re- jection), Glaxo contends that it has on that basis alone sufficiently rebutted the Festo presumption and justified its in-vocation of the doctrine of equivalents. . . . Glaxo is incorrect. [New] matter prohibitions are not directly germane to the doctrine of equivalents or the patentee’s proof to overcome the Festo presumption. The new matter doctrine pre-vents an applicant from adding new subject matter to the claims unless the specification shows that the inventor had support for the addition at the time of the original filing. Thus, the new matter doctrine ensures the temporal integrity of the amendment process in the Patent Office and does not apply to nontextual infringement. In fact, the quintessen-tial example of an enforceable equivalent, after-arising technology, would always be unclaimable new matter. In that sense, the doctrine of equivalents compensates for the patentee’s inability to claim unforeseeable new matter. . . . On this point, the record shows that at the time the amendments were made, no known hydrogels other than HPMC had been tested with bupropion hydrochloride to achieve sustained release. Thus, with respect to bupropion alone, a portion of the record might suggest that PVA was not a known sustained release agent at the time of the amendment. [But this] court cannot discern whether the prior art disclosed PVA as an alternative to HPMC as a sus-tained release agent so that Glaxo could rationally foresee that a competitor might substitute PVA for HPMC in de-signing around the amended ‘798 patent claims or whether PVA was not a foreseeable sustained release agent for bupropion or similar formulations. For more information, contact Lawrence M. Sung, Ph.D. • 202.661.3715 • [email protected]

Institute of Experimental and Clinical Pharmacology and Toxicology Chair of Clinical Pharmacology and Clinical toxicology the following topics, which are funded e.g. and oAtP1B3-mediated pravastatin uptake. by the German Research Council (DFG) and In vivo , this reduced hepatic uptake may lead the German Cancer Aid, are in the focus of to elevated pravastatin plasma concentrations our s