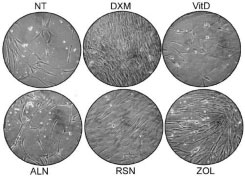 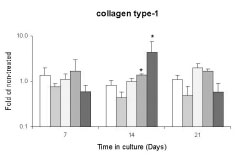 STATISTICAL ANALYSIS
Statistical analysis of real-time RT-PCR data was assessed using one-way analysis of variance (ANOVA) and post-hoc
paired, double-sided t-tests generated from 2 independent
hBMSC cultures, with p< 0.05 considered to be significant.
RESULTS
All three bisphosphonates enhanced osteoblastic differen- tiation of hBMSC in vitro (Fig. 1). Semiquantitative RT-PCR and quantitative real-time RT-PCR analysis demonstrated upregulated mRNA expression for CBFA-1, BMP-2, and type I collagen in hBMSC after administration of alendronate, rise-dronate, and zoledronate (Fig. 2). These effects were most pro-nounced after 14 days of culture, particularly under treatment with zoledronate (p< 0.05 versus control for Collagen type I), risedronate (p< 0.05 versus control for Collagen type I) and Figure. 1: Enhanced osteoblastic differentiation under bisphosphonate treatment DISCUSSION
This study provides further evidence that bisphosphonates have anabolic effects on osteoblasts. Different bisphosphonate treatments induced an upregulated gene expression pattern of hBMSC in vitro and triggered differentiation of omnipotential hBMSC along the osteoblastic differentiation pathway. These findings are consistent with reports of osteogenic differentia- tion, by Frank, et al. 11 Interestingly, these effects followed a time- and type-dependent pattern. Of note, the highly potent new bisphosphonate, zolendronate, tended to have the stron-gest effects on osteogenic differentiation of hBMSC reflecting Figure 2: Gene expression after 14 days of hMBSC culture determined using semi-quantitative RT-PCR. GAPDH served as housekeeping gene.
the higher biological potency of this drug as demonstrated in recent clinical trials. 6 The mechanism of action behind the anabolic effects of bisphosphonates on osteoblastic differentiation of hBMSC in vitro is not known. Our data suggests that bisphosphonates might initially promote expression of key genes like BMP-2 or CBFA-1, which secondarily causes a pronounced osteogenic differentiation of pluripotential hBMSC. Further investigation is needed to determine how our in vitro results translate to bone quality and bone turnover in vivo. In summary, our findings suggest that the in vivo use of bisphosphonates could lead to enhanced recruitment of bone forming cells, and ultimately show pronounced bone formation and net gain of bone mass. An enhanced understanding of the complex interactions of bisphosphonates with bone metabo-lism, on both the osteoblastic and osteoclastic side, might open Figure 3: mRNA levels of collagen type I determined using real-time PCR. Data is up a broad application of these drugs to critically improve the presented as fold difference and measured in cells from 2 independent donors under all treatment conditions. * p<0.05 over negative control.
biological fixation and durability of implants in orthopaedic surgery.
ACKNOWLEDGEMENTS
This study was supported by the National Institutes of
Health (NIH AR 47465-02) and an Educational Grant from Merck Inc. 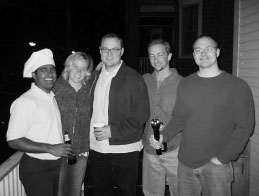 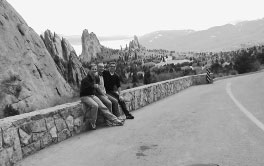 Livestock Management April 2007 Parasites Important to Poultry in Hawai‘i and Their Control Hawai‘i is home both to a commercial poultry in­ Important parasites of poultry in Hawai‘i dustry and to many small rural homesteads that The most common and economically important internal raise chickens for subsistence, hobby, show, or simply poultry parasites in Hawai‘i