The basis for sustainable business in the Karoo: Bringing ecological and economic issues together Sue Milton, Renu-Karoo Veld Restoration cc, PO Box 47, Prince Albert 6930
2. Karoo natural capital and its economic significance 3. Agriculture, tourism, mining: opportunities and threats 4. Ecological and economic role of a sustainability service industry Travelers between Windhoek or Gauteng and Cape Town often perceive the Karoo as a “desert”, a badland characterized by heat, dust, overgrazing and marginalized people. This was not the way in which earlier inhabitants viewed its economic and cultural role. The area supported hunter-gatherers for about one million years (Deacon and Deacon 2003; Smith 1999), nomadic herders for 2000 years (Penn 1987, Smith 1999) and has supported settled ranching for 250 years (Beinart 2003). It was once considered the economic heart of the country (Shaw 1875), but the combination of past over-exploitation of grazing that caused land degradation (Talbot 1961; Dean & Macdonald 1994; Hoffman and Ashwell 2001), and current national policies that invest preferentially in the geographical areas with the highest potential for economic growth, have led the current economic slump in the region (Nel and Hill 2008). However, despite the current local and global economic gloom, the real basis for Karoo business, the natural capital of the region, survives more or less intact. The concept of natural capital embraces all natural resources and ecosystem services that have benefits for people (Aronson et al. 2007). In this paper I will describe the richness of Karoo natural capital, the business opportunities that it provides and the ways in which Karoo business depends on it, the negative feedbacks (threats) to natural capital caused by business development, and the need for sustainability services to be supplied by the public and private sectors. 2. Karoo natural capital and its economic significance The Karoo natural capital upon which all biological, cultural and economic activity depends is water. Figure 1 illustrates how Karoo businesses depend largely upon the agricultural, 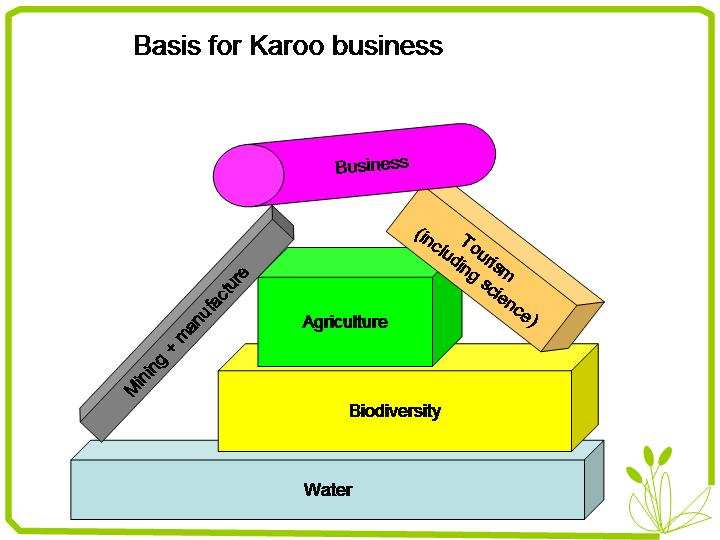 DRUGS QUIZ is the state of intoxication it produces 5. Injecting can be one of the most dangerous TRUE 6. Withdrawal from Heroin is not dangerous 7. The effects of solvent sniffing are similar DRUGS QUIZ Ecstasy is classed as a hallucinogenic, amphetamine-based drug. It is usually available in tablet form. It takes effect after 20-60 minutes and can last for several hours. The dru