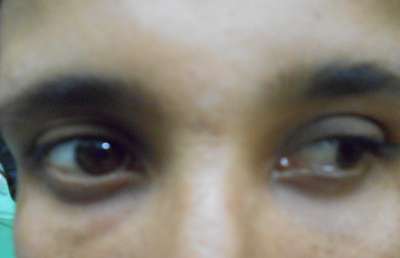 Submitted: Dec 5, 2012; Accepted: Jan 7, 2013; Published: Jan 25, 2013 Abstract: Multiple sclerosis (MS) is a chronic disease
spinal cord. MRI showed hyperintensities on T2 weighted characterized by inflammation, demyelination, gliosis images oriented perpendicular to the ventricular surface, (scarring), and neuronal loss; the course can be relapsing- corresponding to the pathologic pattern of perivenous remitting or progressive. Manifestations of MS vary from a demyelination (Dawson's fingers) and hyperintensities in the benign illness to a rapidly evolving and incapacitating dorsal tegmentum of caudal pons(Fig. 3a & 3b). Patient was disease requiring profound lifestyle adjustments. We report a diagnosed to be multiple sclerosis. She was treated with 24 year old female who presented with right internuclear intravenous methylprednisolone 1000mg for 5 days followed ophthalmoplegia with right lower motor neuron facial nerve by oral prednisone tapered over 2 weeks. Patient signs palsy which is called eight and half syndrome. The etiology improved during hospital stay. On follow up, patient had no in our patient was multiple sclerosis which was confirmed by radio-imaging studies. Patient improved on pulse therapy of
methyl prednisolone and tapering dose of steroids.
Key Words: Eight and half syndrome; Multiple sclerosis;
Fifteen and half syndrome.
Introduction
Multiple sclerosis is a demyelinating disease affecting the
myelin and can involve any part of central nervous system.
We report an interesting case of eight and half syndrome
affecting young female which was due to multiple sclerosis
confirmed on magnetic resonance imaging. She improved on
pulse therapy and tapering dose of steroids.
Case Report:
A 24 years female patient from Shimla presented in medicine
OPD with complaints of acute onset of double vision which
was non progressive. It was present only on left side eye Fig. 1: Right medial rectus palsy
movements. On examination, there was medial rectus palsy Discussion:
of right eye(Fig. 1) along with nystagmus in the abducting Multiple sclerosis (MS) is a chronic disease characterized by eye when the patient was asked to see at extreme left. There inflammation, demyelination, gliosis (scarring), and neuronal were also findings of right lower motor neuron facial palsy in loss; the course can be relapsing-remitting or progressive. the form of obliterated skin folds over forehead and Lesions of MS typically occur at different times and in prominent left nasolabial fold(Fig. 2a & 2b). Rest of the different CNS locations (i.e., disseminated in time and clinical neurological examination was normal. Patient was space). Manifestations of MS vary from a benign illness to a investigated with magnetic resonance imaging of brain and rapidly evolving and incapacitating disease requiring 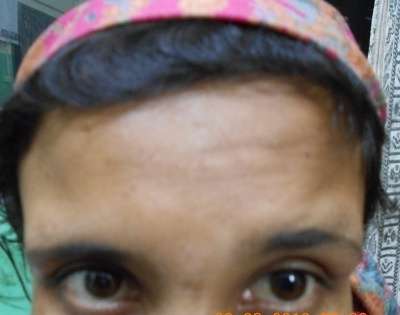 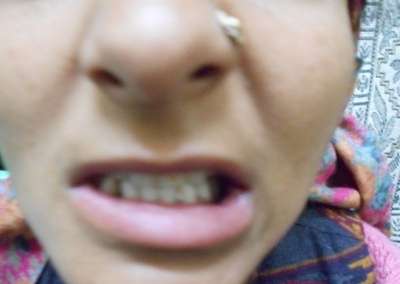 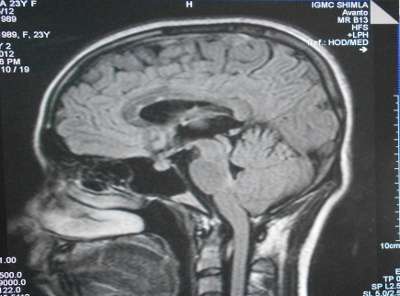 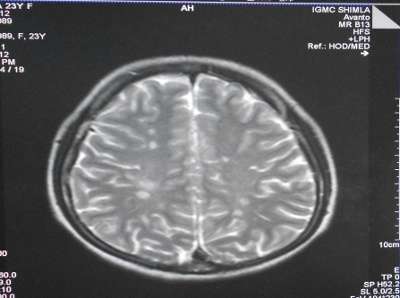 profound lifestyle adjustments. MS is approximately threefold more common in women than men. The age of onset is typically between 20 and 40 years (slightly later in men than in women)1, but the disease can present across the life span. Our patient was female with age of 24 years which was consistent with normal age and sex presentation. Fig. 3b: Hyperintensities in periventricular area.

Eight-and-a-half syndrome is caused by a lesion in the dorsal
tegmentum of the caudal pons involving the PPRF or
abducens
fasciculus(MLF), as well as the nucleus and fasciculus of the facial Ophthalmoplegia (INO) in addition to horizontal gaze palsy (one-and-a-half syndrome) and ipsilateral lower motor neuron-type facial palsy. Our patient had same signs on right Fig. 2a: Absence of skin folds over right half of forehead
side. Patients with one-and-a-half syndrome and facial nerve palsies may develop oculopalatal myoclonus weeks to years after the onset of the ocular motility problem.3 The one-and-a-half syndrome has also been described with facial diplegia (the fifteen and half syndrome [1½ + 7 +7 = 15½]).4 It may also be associated with supranuclear facial weakness on the same side as the gaze palsy and internuclear ophthalmoplegia with lesions of the paramedian aspect of the dorsal pontine tegmentum, providing evidence for the existence of corticofugal fibers that extend to the facial nucleus in the dorsal paramedian pontine tegmentum.5 The one-and-a-half syndrome is most often caused by multiple sclerosis, infarcts, hemorrhages, trauma, basilar artery aneurysms, brainstem arteriovenous malformations, and tumors.6-8 Symptoms of MS are extremely varied and depend on the location and severity of lesions within the CNS . Fig. 2b: Prominent left nasolabial fold
dysfunction, often in asymptomatic locations. On MRI, characteristic abnormalities are found in >95% of patients although more than 90% of the lesions visualized by MRI are asymptomatic.1 Lesions are frequently oriented perpendicular to the ventricular surface, corresponding to the pathologic pattern of perivenous demyelination (Dawson's fingers). Lesions are multifocal within the brain, brainstem, and spinal cord. Lesions larger than 6 mm located in the corpus callosum, cerebellum, or spinal cord are particularly helpful diagnostically. Diagnostic criteria for clinically definite MS require documentation of two or more episodes of symptoms and two or more signs that reflect pathology in anatomically noncontiguous white matter tracts of the CNS. Symptoms must last for >24 h and occur as distinct episodes that are separated by a month or more. At least one of the two required signs must be present on neurologic examination. Fig. 3a: Dawson’s fingers and hyperintensity in dorsal
The second may be documented by abnormal paraclinical tegmentum of lower pons.
tests such as MRI or evoked potentials (EPs)1. Our patient
had signs of eight and half syndrome ald lasted for more than
24 hours. Second part was documented on MRI(1 attack;
objective clinical evidence of 2 or more lesions). So our
patient had definite multiple sclerosis.