Endovenous obliteration versus conventionalstripping operation in the treatment of primaryvaricose veins: A randomized controlled trial withcomparison of the costs Tero Rautio, MD,a Arto Ohinmaa, PhD,b Jukka Pera¨la¨, MD, PhD,c Pasi Ohtonen, MSc,a
Timo Heikkinen, MD, PhD,a Heikki Wiik, MD,a Pasi Karjalainen, MD,d Kari Haukipuro, MD, PhD,a
and Tatu Juvonen, MD, PhD,a Oulu, Finland; and Edmonton, Canada
Objective: The aim of this randomized study was to compare a new method of endovenous saphenous vein obliteration
(Closure System, VNUS Medical Technologies, Inc, Sunnyvale, Calif) with the conventional stripping operation in terms
of short-term recovery and costs.
Methods: Twenty-eight selected patients for operative treatment of primary greater saphenous vein tributary varicose veins
were randomly assigned to endovenous obliteration (n ؍ 15) or stripping operation (n ؍ 13). Postoperative pain was
daily assessed during the 1st week and on the 14th postoperative day. The length of sick leave was determined. The
RAND-36 health survey was used to assess the patient health-related quality of life. The patient conditions were
controlled 7 to 8 weeks after surgery, and patients underwent examination with duplex ultrasonography. The comparison
of costs included both direct medical costs and costs resulting from lost of productivity of the patients. Costs that were
similar in the study groups were not considered in the analysis.
Results: All operations were successful, and the complication rates were similar in the two groups. Postoperative average
pain was significantly less severe in the endovenous obliteration group as compared with the stripping group (at rest: 0.7,
standard deviation [SD] 0.5, versus 1.7, SD 1.3, P ؍ .017; on standing: 1.3, SD 0.7, versus 2.6, SD 1.9, P ؍ .026; on
walking: 1.8, SD 0.8, versus 3.0, SD 1.8, P ؍ .036; with t test). The sick leaves were significantly shorter in the
endovenous obliteration group (6.5 days, SD 3.3 days, versus 15.6 days, SD 6.0 days; 95% CI, 5.4 to 12.9; P < .001, with
t test). Physical function was also restored faster in the endovenous obliteration group. The estimated annual investment
costs of the closure operation were US $3360. The other direct medical costs of the Closure operation were about $850,
and those of the conventional treatment were $360. With inclusion of the value of the lost working days, the Closure
treatment was cost-saving for society, and when 40% of the patients are retired (or 60% of the productivity loss was
included), the Closure procedure became cost-saving at a level of 43 operations per year.
Conclusion: Endovenous obliteration may offer advantages over the conventional stripping operation in terms of reduced
postoperative pain, shorter sick leaves, and faster return to normal activities, and it appears to be cost-saving for society,
especially among employed patients. Because the procedure is also associated with shorter convalescence, this new method
may potentially replace conventional varicose vein surgery. (J Vasc Surg 2002;35:958-65.)
In the Western countries, operations on varicose veins the procedure is associated with significant surgical mor- are among the most common surgical procedures. In Fin- land, approximately 220 varicose vein operations per Recurrence is common after primary greater saphenous 100,000 inhabitants are performed each year.1 The strip- varicose vein surgery. Rates as high as 40% at 5 years have ping operation is a relatively inexpensive day surgery pro- been reported, and approximately 20% of varicose vein cedure that needs no special instrumentation. Varicose vein operations are done for recurrent veins.3,4 Furthermore, surgery is regarded as a safe and minor procedure; indeed, reoperations also result in marked losses of productivity. InFinland, the average sick leave time after a stripping oper-ation has been 4 weeks (Statistics of the Finnish National From the Departments of Surgery,a Radiology,c and Anesthesiology,d Oulu Pension Office 1997). Therefore, the economic conse- University Hospital; and the Department of Public Health Sciences,University of Alberta.b quences of varicose vein surgery and its numerous recur- Supported by a grant from the University of Oulu, Finland.
rences for healthcare and whole society are high.
This issue has led to the development of mini-invasive Additional material for this article may be found online at www.mosby.
techniques to replace the traditional procedure of stripping Reprint requests: Tero Rautio, MD, Department of Surgery, Oulu Univer- of the greater saphenous vein (GSV). Endovenous obliter- sity Hospital, Kajaanintie 50, SF-90230, Finland (e-mail: [email protected] ation (Closure System, VNUS Medical Technologies, Inc, Sunnyvale, Calif) is a new method in which a catheter is Copyright 2002 by The Society for Vascular Surgery and The American inserted percutaneously to treat the GSV insufficiency.5,6 The operative costs of this new technique are higher be- 0741-5214/2002/$35.00 ϩ 0 24/1/123096
doi:10.1067/mva.2002.123096
cause of the purchasing price of the device and the dispos- 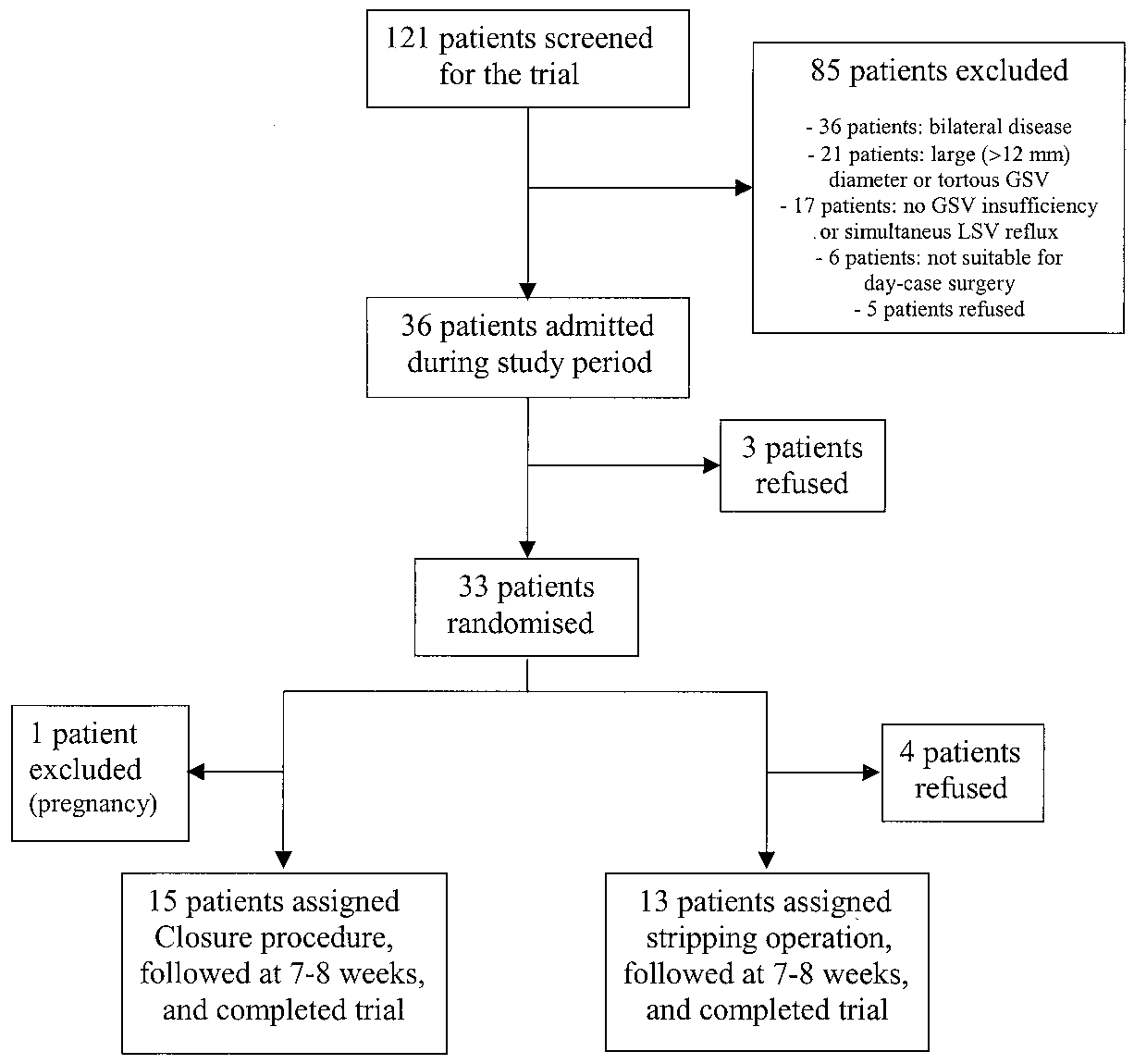 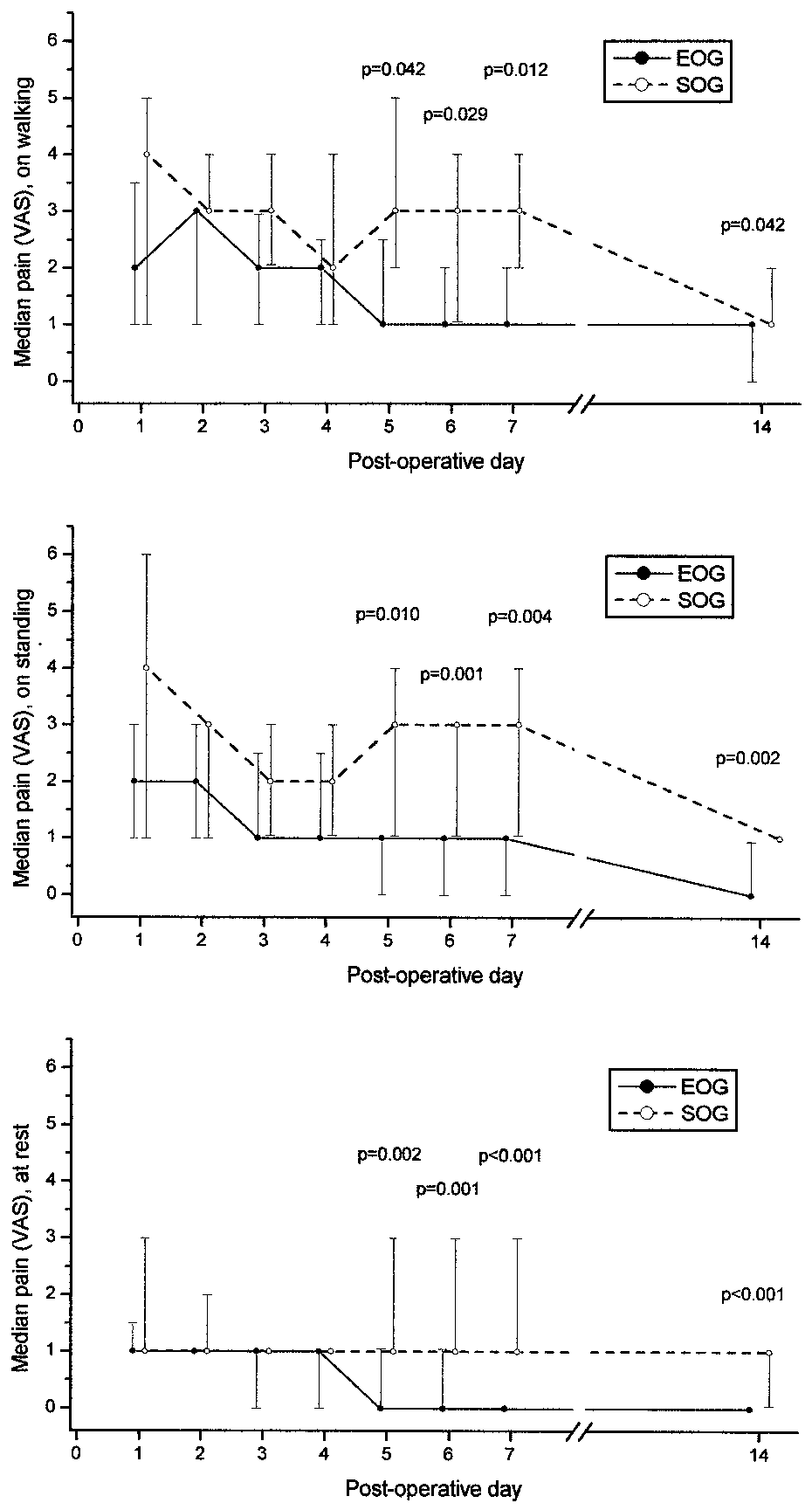 962 Rautio et al
Table III. Postoperative complications after closure
procedure and stripping operation for primary varicose
veins
accessory branch of GSV, which resulted in a score of 1 aftersurgery. The average decrease of the venous clinical severityscore was 5.1 (SD, 1.5) in the endovenous obliterationgroup and 4.4 (SD, 1.1) in the stripping group (P ϭ .19,with TT). The postoperative venous disability score was 0in all but two patients (one from each group), who occa-sionally needed compression stockings while working.
Intraoperative complications consisted of a painful groin hematoma (stripping group) and three small second-degree thermal skin injuries (endovenous obliterationgroup). The burns did not need specific treatment andhealed completely. These three patients, however, had ten-derness and induration over the course of the treated GSVsegment. In one of these cases, thermal burn scar wasnoticed at the time of follow-up visit and was considered asa late complication (Table III). Saphenous nerve paresthesis,defined as numbness or dysesthesia, which was limited tothe thigh, developed after two endovenous procedures andthree stripping operations. On the whole, minor postoper-ative complications were common in both groups, withseven in the endovenous obliteration group and seven inthe stripping operation group (Table III). None of thecomplications caused any need for treatment or resulted inincreased costs.
The average visual analogue scale pain scores at rest, on standing, and on walking were significantly lower in theendovenous obliteration group than in the stripping group Fig 2. Median pain scores with 25th and 75th percentiles at rest
(rest: 0.7, SD 0.5, versus 1.7, SD 1.3, P ϭ .017; standing: and on standing and walking. (Daily P values were calculated with 1.3, SD 0.7, versus 2.6, SD 1.9, P ϭ .026; walking: 1.8, SD Mann-Whitney U test). EOG, Endovenous obliteration group; 0.8, versus 3.0, SD 1.8, P ϭ .036; with TT). The differ- SOG, stripping operation group; VAS, visual analogue scale.
ences were especially clear from the 5th to the 14th post-operative day (Fig 2). Patients in the endovenous oblitera- The changes in the health-related quality of life param- tion group also needed less analgesics than those in the eters are shown in Table IV. Physical function was restored stripping group (average daily number of 600-mg ibupro- faster in the endovenous obliteration group. All patients fen tablets, 0.4, SD 0.49, versus 1.3, SD 1.09, P ϭ .004, were satisfied with the treatment, but one patient in the endovenous obliteration group and four in the stripping The sick leaves were significantly shorter in the en- group were dissatisfied with the cosmetic outcome.
dovenous obliteration group (6.5, SD 3.3, versus 15.6, SD The cost analysis results showed that the annual cost of 6.0; 95% CI, 5.4 to 12.9; P Ͻ .001, with TT). An even the VNUS Closure generator was about $3400, which more distinct difference was seen in the patients’ own would have meant $120 per operation if all of our trial assessment of the length of the required sick leave (6.1, SD operations had been performed with the Closure procedure 4.4, versus 19.2, SD 10.0; 95% CI, 7.2 to 18.9; P ϭ .001, (Table I). The operative costs of the endovenous oblitera- with TT). A positive correlation between age and sick leave tion were significantly higher, mainly because of the cost of (␶ ϭ 0.37; P ϭ .012) was observed (Appendix B, online the catheter. However, the combined cost effect of the additional specialist and the rent of the ultrasound scan 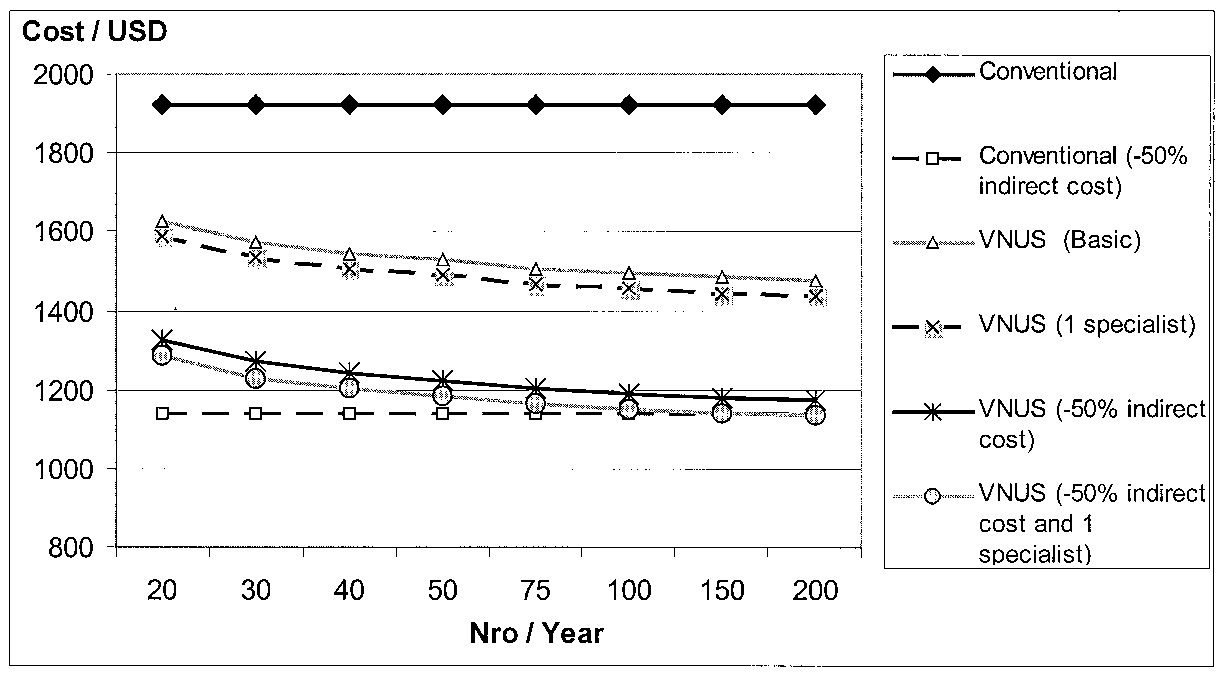