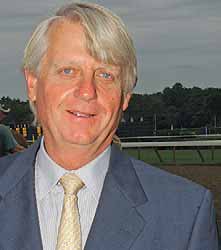 FIVE MINUTES WITH . JOHN T. WARD JR.
Kentucky Derby-winning trainer John T. Ward Jr. assumed his new duties as executive direc- Ward, a central Kentucky native and a graduate of tor of the Kentucky Horse Racing Commission the University of Kentucky, grew up immersed in the this spring with an overflowing agenda of is- horse industry as his father, grandfather, and uncle all sues facing the regulatory organization and the Commonwealth’s horse industry in general. Ward established his own reputation through the years and reached a career peak when he trained 2001 race-day furosemide (Salix, commonly referred Derby winner Monarchos for his longtime clients John to as Lasix) in graded and listed stakes races Ward, who relinquished training duties to his wife and business partner Donna upon taking his new job, spent several minutes with THOROUGHBRED TIMES TODAY assistant editor Patrick Reed discussing the future of Kentucky’s racing, current trends in promoting racing, Date of birth: August 2, 1945 Residence: Paris, Kentucky Family: wife, Donna You are assuming your new position at KHRC during an I always like to compare sports to other sports. And I guess, era when Kentucky’s racetracks have in many cases reduced just sitting here thinking about it, it’s like having a National Bas- race dates and continue to operate without added gaming rev- ketball Association team that has the best athletes playing with enue. How do you see Kentucky’s racing industry remaining five men on the court versus another team playing with six guys. The sixth team member would in this case be the Lasix (The passage of a casino bill) is something out of my con- trol. As far as this commission goes, it’s not something that I In baseball, it’s like having an extra player on the field. In can affect. What I can affect is the quality of racing in this state football, you always see these great plays done when there are and getting a really good pari-mutuel signal out there, which twelve men on the field. And if you look at hockey—and I’m should be the signature of our Kentucky racing industry.
not a huge hockey fan—what is the greatest penalty a hockey And the other unique thing is that it’s time we start looking team can have? When you have a man penalized and they’re at other alternatives, different ways to use our pari-mutuel in- dustry. There are a lot of people out there that are starting to Essentially, Lasix is that extra man in a competition. It’s al- have ideas about different types of bets and different betting right trying to play six against six, but five against six doesn’t platforms and different scenarios that use racing as the basis in their pari-mutuel pools. I think we’ve got to look very closeat that.
What other elements of racing could be examined and pos- We get so locked in to win-place-show and (exacta and tri- sibly reformed to help the sport gain fans? fecta betting) that sometimes we forget about the act of horse I think that all of the different scenarios that go along with producing a race that is going to be televised and promoted as In my field, there’s the sport of horse racing and the busi- a major sporting event—we just need to look at everything that ness of horse racing. And a lot of times, they are not necessar- If you’ll go back to the Queen Anne Stakes (G1) in England (won by Frankel on June 19 at Royal Ascot), go back and watch What is your opinion of Kentucky racetracks’ marketing the riders as far as their use of the whip in that race. There was initiatives in recent years, such as the success of Churchill nothing visually disturbing about it. And each one of those Downs showcasing racing as part of a larger entertainment So, if you’re a neophyte sporting fan and wanted to watch a I think that any time we do something different using our great athlete, you are not going to be turned off by anything product of racing, people that are very set in their ways that don’t like change are going to react negatively to it. But I think,over the last four or five years, we’re seeing racetracks start- In light of the commission’s vote on Salix and of the other is- ing to take chances and starting to look at our business in a dif- sues facing Kentucky’s Thoroughbred industry, what is your out- look for the KHRC and your overall goal as chief regulator? And, they’ve had some successes, and they’ve probably had We’re going to keep on moving forward. And that means— more failures. But the experience is, they are starting to repeat we’re not going to do anything radical—but my goal is to make their successes. And the failures are starting to go away. So I sure that we have the best simulcast signal there is, and we’re see the total scenario starting to work. going to ask people to prove that they’ve got one as good as wehave. With regards to the KHRC’s recent vote, how do you think And we’re going to (move forward) with concern that the in- the gradual phase-out of Salix will benefit Kentucky racing? dustry—the trainers and owners are totally included in this— I just think that there are a lot of owners out there that would that they are able to compete fairly for the purse, and that no like to be able to participate in like company.

Caffeine in Pregnancy Caffeine is a stimulant found in many foods, beverages and some medications. Caffeine is naturally produced by a variety of plants. It also is added to some foods and beverages for flavor. The main source of Most experts agree that small amounts of caffeine (equal to about one to two 8-ounce cups of coffee a day) appear safe during pregnancy (1). The safety of larger a