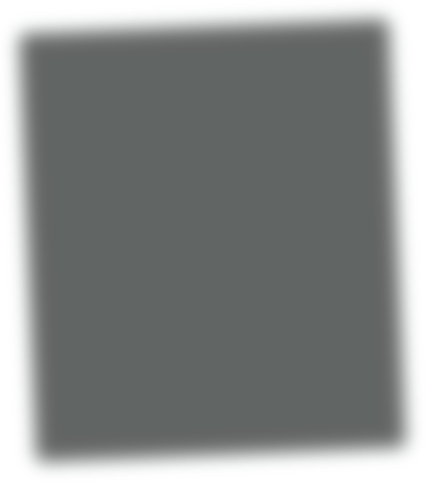 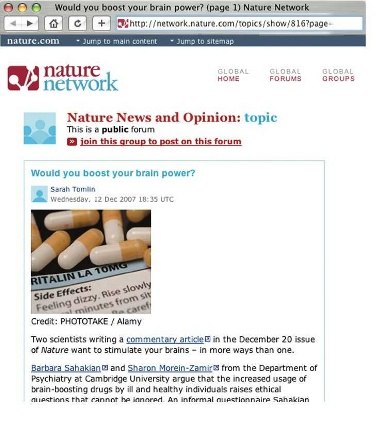 All Correspondence this week responds to the expansion of diagnostic categories and Barbara Sahakian and Sharon Morein- the invention of new pathological conditions Zamir’s Commentary ‘Professor’s little helper’ — sometimes to cover cases that in earlier (Nature 450, 1157–1159; 2007) and the
times would have been regarded as within related discussion at http://network.nature. Third, it contributes to inequity in access. This week, Nature launches an anonymous online survey to build on the informal be interested in trying modafinil or a related questionnaire that the Commentary authors drug is not cost (which is similar to that sent academics on the usage of brain-boosting of a large cup of coffee) but information: drugs. In aggregate, the survey results will guide future editorial content on this topic. To take obtain it. This discriminates against people part, please visit: http://tinyurl.com/yq7nn3. The action of enhancers
medicine, we need to retool our regulatory can lead to addiction
occupations such as military commandos and air-traffic controllers that would SIR — Sahakian and Morein-Zamir revive questions about the widespread availability and diversion of prescription medications intellectually taxing — including the jobs of for non-clinical use in healthy individuals Drugs can be used to treat
(Nature 450, 1157–1159; 2007). Such
that can help our brains deal better with the questions drove legislators to impose controls more than disease
a few decades ago, when amphetamines and actively sought. But it will require substantial Because the diversion of drugs is linked investment to develop interventions that are (Nature 450, 1157–1159; 2007). I agree with
both safe and effective in long-term use.
Organization monitors their production and the point made by several commentators, that Nick Bostrom
consumption by individual nations. In the there is a need for better understanding of the United States, production of stimulant drugs long-term effects of using potential cognitive enhancers in an ecological setting. It is one and enough are now produced each year for thing to show a short-term positive effect 16/17 St Ebbe’s Street, Oxford OX1 1PT, UK the daily treatment of at least four million on some artificial lab task; it is quite another to show that long-term use actually leads to other cognitive enhancers are intended for sustainable performance gains on important Low dose of alertness drug
legitimate clinical use, history predicts that real-world tasks, such as academic output. greater availability will lead to an increase The former is easier to demonstrate, but the counters ‘family fatigue’
high-school students, abuse of prescription SIR — I have been taking 50 mg of modafinil medications is second only to cannabis use. almost daily for over a year. For most of my understanding their long-term effects, is 74 years, I have struggled with fatigue and improve our cognitive performance might be hampered by a shortage of focused research desirable in theory, these may have adverse in this area. In general, the potential of afternoon. This is part of my family history: enhancement medicine has yet to be fully my father and grandfather both structured are necesssary, for these medications can be afternoon naps into their schedules. I have addictive. This is because cognitive enhancers Prevailing patterns of medical funding and found that caffeine and nicotine are either regulation are organized around the concept ineffective or cause a jittery nerviness. The side effects of the antidepressants I tried — activity of dopamine, a neurotransmitter that desipramine, Paxil and Wellbutrin — were increases saliency, making cognitive tasks and effects was developed as a treatment for some everyday activities seem more interesting and pathology. Its good effects on healthy adults’ rewarding. This learned experience can lead brains were discovered as fortuitous side desired an extended high level of attention. to abuse of the drug and to compulsive use Previously, I could work competently on the interventions to improve cognition. In the First, it makes funding hard to come by; modafinil, I could continue for almost three meantime, we need to learn from history and it also makes it difficult to obtain regulatory hours. It did not make me ‘smarter’, but approval for enhancement drugs. The result extended the length of concentrated focus.
Nora D. Volkow*, James M. Swanson†
is that those who wish to research cognitive country drive, I was not only more alert but found the journey more enjoyable and less I have not seen any data suggesting that benefits of a cognitive enhancer, the user modafinil is either habit-forming or easily must first be classified as sick. This leads to abused (I have not looked for studies in