Kim 3845 r1.qxd:Layout 1 25/1/10 10:02 Page 124 Anti α-Gal Immune Response Following Porcine Bioprosthesis Implantation in ChildrenChun Soo Park1, Seong-Sik Park2, Sun Young Choi2, Sun Hee Yoon1, Woong-Han Kim1, Yong Jin Kim1,2 1Department of Thoracic and Cardiovascular Surgery, Seoul National University College of Medicine, 2Seoul NationalUniversity Hospital Clinical Research Institute, Xenotransplantation Research Center, Seoul, Republic of Korea Background and aim of the study: Porcine bioprosthe-
tively. All serum samples were analyzed using an
ses have been widely used in cardiac surgery in the
enzyme-linked immunosorbent assay to investigate
treatment of valvular heart disease. However, in
the α-Gal immune response.
younger patients, their use has been limited by early
Results: There were no operative deaths or complica-
failures known to be associated with an immune
tions. There was no statistically significant differ-
response and subsequent degeneration. The natural
ence between the titers of anti α-Gal antibodies of
antibodies directed at Galα1, 3-Galβ1-4GlcNAc-R(α-
the PVR and re-PVR groups. The titer of anti α-Gal
Gal), have been thought to initiate an immune
antibodies (IgM and IgG) was decreased on the first
response in humans transplanted with porcine organ
postoperative day, but increased in the first postop-
xenografts. The study aim was to determine the anti
erative week, regardless of the isotype. Whilst the
α-Gal immune response following commercial
titer of the anti α-Gal IgM antibody began to
porcine bioprosthesis implantation in children.
decrease after three weeks postoperatively, the titer
Methods: Between January 2008 and April 2008, 19
of anti α-Gal IgG antibody remained increased after
consecutive patients underwent pulmonary valve
two months.
replacement (PVR) with a commercially available
Conclusion: The implantation of a porcine biopros-
porcine bioprosthesis for an incompetent pulmonary
thesis elicits the increased formation of anti α-Gal
valve with congenital heart diseases. The median age
antibodies during the early postoperative period in
at surgery was 132 months (range: 14-330 months).
children, with different patterns between the two
Previous PVR with a porcine bioprosthesis had been
isotypes. The IgM antibody response was rapid and
performed in seven patients at a median of 44
transient, while the IgG antibody response was
months (range: 26-117 months) before surgery (re-
longer and more delayed.
PVR group). Sera were obtained sequentially five
times: immediately before surgery, and at one day,
one week, three weeks, and two months postopera-
The Journal of Heart Valve Disease 2010;19:124-130 Xenoreactive natural antibodies directed at the designated to the α-Gal epitope in humans, and Galα1, 3-Galβ1-4GlcNAc-R (α-Gal), epitope are known although anti α-Gal antibodies are produced through- to be a major barrier in xenotransplantation. The natu- out the patient’s lifetime due to exposure to the gut ral anti-pig antibodies in human serum react predomi- flora (3), the titers of natural antibodies show individ- ual differences (4). In xenotransplantation, anti α-Gal α-Gal-xenoreactive antibodies comprise at least 80- antibodies mediate the hyperacute rejection with com- 90% of anti-pig antibodies in humans (2).
plement activation, and delayed or chronic rejection Approximately 1% of the circulating antibodies are with an antibody-dependent cellular cytotoxicitymechanism (3,5-7).
The α-Gal epitope is expressed on a variety of tissues in pigs, including the cardiac valve endothelium (1,8- Yong Jin Kim MD, PhD, Department of Thoracic and Cardiovascular 10); recently, the presence of the α-Gal epitope was Surgery, Seoul National University College of Medicine, SeoulNational University Hospital Clinical Research Institute, documented in commercial bioprosthetic valves treat- Xenotransplantation Research Center, 28 Yongon-dong, Jongno-gu, Many patients who undergo procedures on the right Kim 3845 r1.qxd:Layout 1 25/1/10 10:02 Page 125 Anti α-Gal immune response 125 Table I: Patient preoperative characteristics. *Diagnosis: AORPA: Anomalous origin of right pulmonary artery; cc-TGA: Congenitally corrected TGA; PA: Pulmonaryatresia; PS: Pulmonary stenosis; PVR: Pulmonary valve replacement; TGA: Transposition of the great arteries; TOF: Tetralogy of Fallot; VSD: Ventricular septal defect.
+Preoperative medication: ADT: Aldactone; DCZ: Diclozide; DGX: Digoxin; ENL: Enalapril.
‡Valve: CE: Carpentier-Edwards Bioprosthetic Valved Conduit Model 4300 (Edwards Lifesciences); H: Hancock® II Aortic,Medtronic™; SJM: Epic™ SUPRA valve Aortic, St. Jude Medical, Inc.
ventricular outflow tract require pulmonary valve increased formation of anti α-Gal antibodies; and (ii) replacement (PVR), with or without a conduit.
monitor perioperative changes in the titer of the anti α- Although, in most centers (including that of the pres- Gal antibodies (IgM and IgG) over time.
ent authors) the prosthesis of choice for PVR is ofporcine origin, such bioprostheses have a limited dura- Clinical material and methods
bility due to valve degeneration that occurs more fre-quently in younger patients (8,9,12-14). The Patients
degeneration of bioprostheses is multifactorial, and Between January 2008 and April 2008, 19 consecutive includes immunologic reactions, foreign body reac- patients underwent PVR with porcine bioprostheses tions, blood-surface interactions, chemical factors, produced by three manufacturers: the EpicTM SUPRA infection, mechanical factors, material fatigue, and sur- valve aortic (St. Jude Medical, Inc.; the HANCOCK® II gical factors (15). Although the mechanism leading to aortic (Medtronic); and the Carpentier-Edwards premature degeneration of the implanted bioprosthe- Bioprosthetic valved conduit Model 4300 (Edwards sis is not yet fully understood, the immune response Lifesciences). The patients’ diagnoses were tetralogy of has been considered to play an important role as an Fallot or variants thereof in 12 cases, truncus arteriosus initial trigger of the degeneration process (16), and α- in three, congenitally corrected transposition of the Gal has been noted as the major epitope.
great arteries with pulmonary stenosis in two com- The aim of the present study was to: (i) investigate plete transposition of the great arteries with pul- whether bioprosthesis implantation elicits an monary stenosis in one, and anomalous origin or right 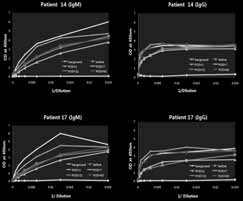 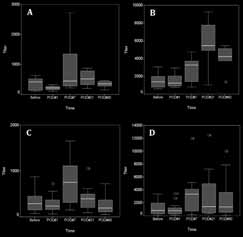 Kim 3845 r1.qxd:Layout 1 25/1/10 10:02 Page 126 126 Anti α-Gal immune response Figure 1: Changes in anti α-Gal activity in patient #14 (PVR group) and patient #17 (re-PVR group). PVR: Pulmonary valve replacement; OD: Optical density; Figure 2: Changes in the anti α-Gal antibody titer in the individual groups. A) Re-PVR IgM titer. B) Re-PVR IgG titer. C) PVR IgM titer. D) PVR IgG titer. PVR: pulmonary artery from the ascending aorta each in one Pulmonary valve replacement; POD: Postoperative day. case. A previous PVR with a porcine bioprosthesis hadbeen performed in seven patients (the re-PVR group)at a median of 44 months (range: 26 to 117 months) before surgery, while the remaining 12 patients under- An ELISA analysis was used to determine the went PVR for the first time (the PVR group). The pre- activity of IgM and IgG isotypes of the anti α-Gal anti- operative characteristics of the patients are listed in bodies. Bovine serum albumin (BSA) containing syn- Table I. The median age at surgery was 132 months thesized α-Gal (α-Gal-BSA), which was prepared by conjugation of α-Gal linker type 1 (Genkem, Postoperatively, all patients followed a similar med- Seoul, Korea) and bovine serum albumin (Armresco, ication protocol. Serum samples were obtained five Solon, OH, USA) with 1-ethyl-3-[3-dimethylamino- times from each patient: immediately before surgery, propyl]carbodiimide hydrochloride (Pierce, USA) in at postoperative day 1, during the first and third post- conjugation buffer (MES buffered saline pack; Pierce), operative weeks, and during the second postoperative was used as a solid-phase antigen. Microtiter plates month. All sera were stored in EDTA tubes and ana- were coated with 100 μl per well of α-Gal-BSA in PBS lyzed within one day of being obtained.
buffer (pH 7.4) (at a concentration of 1 μg/ml for the The study was approved by the institutional review IgM isotype, or 2.5 μg/ml for the IgG isotype), and board/ethical committee of the authors’ institution, incubated for 1 h at 37°C. The plates were then washed and informed consent was obtained from each of the with deionized water. Aliquots of the patient’s serum patients. The study was conducted in accordance with (100 μl per well) were added to the α-Gal-BSA-immo- bilized wells at a serial two-fold dilution, from 1:40 to1: 2,560 in BSA-Triton X-100 (pH 7.4, PBS, 3% BSA, Operative technique
0.01% Triton X-100). The plates were then incubated In all patients, PVR was performed using moderate for 1 h at 37°C. Donkey anti-human IgG and IgM anti- hypothermic cardiopulmonary bypass (CPB) and left bodies (Jackson, Human Research Laboratories Inc.) atrial venting through the right upper pulmonary vein, were used as a secondary antibody at a dilution of with or without myocardial ischemia, under ventricu- 1:15,000 for IgM and 1:10,000 for IgG in BSA-Triton X- lar fibrillation for isolated PVR (n = 10) and after 100. The optical density (OD) was measured at 450 nm release of the aortic clamp in patients with additional using the Thermo Electron-Lab Systems (Multiskan Kim 3845 r1.qxd:Layout 1 25/1/10 10:02 Page 127 Anti α-Gal immune response 127 Table II: Anti α-Gal titers in the two groups.* Values are mean ± SD.
*Titer defined as the dilution at 1.0 of the OD.
PVR: Pulmonary valve replacement; POD: Postoperative day.
Statistical analysis
immediately postoperatively (at one day) and then Background OD-values were subtracted from the increased after one week, when compared to the pre- test OD-values. The titer was defined as the dilution at operative OD, regardless of the isotype. The ODs of the 1.0 of the OD. All data were presented as mean ± SD, IgG isotype remained elevated at the end of the study or median plus range, using Microsoft Excel 2007.
(at 60 days after surgery), but those of the IgM isotype Comparisons were performed using either Student’s t- began to decrease at three weeks postoperatively.
test or a paired t-test. A p-value <0.05 was considered Although the postoperative titer seemed to be high- er in the re-PVR group (Table II; Fig. 2), there was nosignificant difference between the two groups (PVR and re-PVR) with regards to the anti α-Gal IgM andIgG titers (Table II). The change in titer of the anti α- Clinical results
Gal antibodies with time was similar in each patient No early deaths occurred among the patients. The (see Fig. 1). The immediate postoperative (one-day) median CPB time was 167 min (range: 94 to 392 min), titer appeared to decrease, though not statistically sig- while in nine patients aortic cross-clamping was nificantly (Table III; Fig. 3). At one week after surgery required for additional intracardiac procedures. The the titer increased significantly, up to seven-fold in median myocardial ischemic time was 108 min (range: IgM and 32-fold in IgG (Table III; Fig. 3). The IgM titer 55 to 140 min). In all patients, the preoperative prepa- began to decrease at three weeks after surgery, but that ration, anesthetic management and operative strategy of IgG increased from three weeks and was maintained were similar and the hospital course was uneventful, until the end of the study (at two months after surgery) and all were discharged within 10 days after surgery, without complications. Treatment with an angiotensin-converting enzyme inhibitor was required during the Discussion
early postoperative period in eight patients, and anti-coagulation for six months in all patients. The median As α-Gal is a major barrier for xenotransplantation, duration of follow up was 11 months (range: 8 to 14 much effort has been expended to avoid the immune months). All patients were in NYHA functional class 1, response directed against it, including immunoglobu- and none of the patients was administered any cardiac lin or enzymatic treatment and genetic manipulation medication (except warfarin) at the last follow up (α1,3-galactosyltransferase knock-out) (17-19).
Unfortunately, the α1,3- galactosyltransferase knock-out pig is not yet available within a clinical setting, and ELISA: Anti α-Gal antibody titer
other methods such as enzymatic removal of the α-Gal Results from random samples (patient #14 of the epitope have caused only a delay in the rejection. The PVR group and patient #17 of the re-PVR group) are major antibodies that are thought to initiate the hyper- shown in Figure 1. In all cases, the OD decreased acute rejection of porcine xeno-organs include IgM