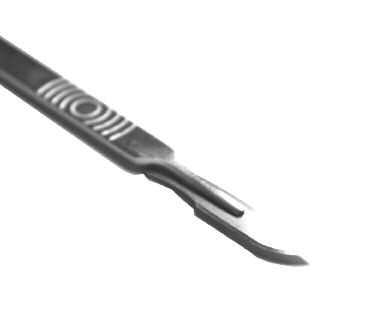 Mucosalpreservationiscriticaltosuccessintreatmentofnasalobstructionsecondaryto turbinate hypertrophy. Since hypertrophy is most often secondary to submucosal and non- osseous factors including hypervascularity and submucosal soft tissue excess, Bipolar Radiofrequency Turbinate Ablation (RFTA) represents a highly effective, rapid, and well-tolerated technique that can be done both in the office/ clinic under local anaesthetic as well as in the operating room (OR) in conjunction with other nasal, sinus, or turbinate procedures.
Hypertrophy of the inferior turbinates is an important cause of nasal obstruction. It is caused by multiple fac- Ablation (RFTA) to be an extremely valuable instru- tors including both soft tissue and bony factors, ment in management of the obstructive turbinate, including hypervascular engorgement, inflammation, both as an isolated procedure, and in conjunction and compensatory turbinate hypertrophy on the side with septoplasty, sinus surgery, and as an adjunct to less blocked by cartilaginous or bony deformities.
limited excisional turbinate procedures. Additionally, Medical treatment for obstruction, while critical and RFTA can be done easily in the office / clinic setting, first-line in nature, often fails when anatomical with re-usable instrumentation, thus providing a turbinate obstruction exists. Thus, turbinate reduction patient-friendly, cost effective alternative to OR is critical to management of the obstructed nose.1 surgery in selected cases. We recommend RFTA as an Traditional y, turbinate excision comprised the main- essential tool in the rhinologic armamentarium.4,5,6 stay of treatment. However, our increasing understand-ing of the role of turbinates in nasal obstruction, along Preoperative assessment
with the morbidity of excisional techniques, most A thorough nasal and sinus examination delineates notable in the prevalence of ‘empty nose syndrome’, led the causes of nasal obstruction. Contributions of the to more conservative approaches to the turbinates.
turbinates, septum, nasal valve, dorsum, and inflam- ‘How I Do It’ is
Unlike epithelium-ablating techniques, RFTA has been matory and infectious causes should be weighed co-ordinated by
shown to preserve mucociliary clearance.2,3 before proceeding. The soft tissue contribution to Mr KW Ah-See, MD,
FRCS, FRCS(ORL),
Consultant Otolaryngologist
-Head and Neck Surgeon,
Aberdeen Royal Infirmary,
Foresterhill, Aberdeen,
AB25 2ZN, UK.
Tel: +44 (0)122 455 3571,
Email: [email protected]
‘How I Do It’
1a: Preoperative view of hypertrophic left turbinate. 1b: RF device inserted into hypertophic turbinate with full Note how the hypertrophic turbinate obstructs the airway, penetration of the bipolar electrodes. David Greene, MD,
FACS, FARS,
Chief of Otolaryngology,
Physicians Regional
Health System;
Adjunct Faculty,
Cleveland Clinic Head
and Neck Institute.
Correspondence
Physician’s Regional
Medical Center, 6101 Pine
Ridge Road, Naples,
FL 34109, USA.
Email: [email protected]
comcast.net
1c: Turbinate at completion of ablation pass with the RF 1d: Postoperative view. Completed turbinate ablation with Tel: 239-348-4081.
device. Note the contraction and blanching of the turbinate, substantial reduction of turbinate bulk, clear airway, and which indicates the endpoint of treatment. unobstructed view of the middle turbinate. ENTNews | JUL/AUG 2008 | VOL 17 NO 3 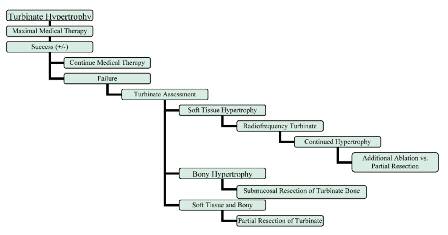 turbinate hypertrophy, versus that of thebone, can be assessed by decongestionwith oxymetazoline.
of obstruction, such as nasal steroids, aller-gy treatment, and treatment of sinusitis,should be performed. Failure of medicaltherapy is the indication for surgical treat-ment. In the ENT clinic, most often ourpatients have already undergone maximal Figure 2: Radiofrequency Turbinate Ablation (RFTA) procedure: before and after. medical therapy, and are ready for surgicalintervention.
later, a second injection is given to ‘re- inflate’ the turbinate, expanding the sub- burning or injuring surrounding structures.
vision, allowing the surgeon to observe the 1. Isolated turbinate hypertrophy princi- hypertrophic turbinate tissues blanch and additional tachycardia in the patient since cautery, the tissue is not allowed to char. As 3. High-risk status of the patient for the OR probe (Ellman International, Oceanside, NY, 4. Patient preference for a minimally-inva- USA) is then introduced submucosally into the turbinate at the head of the turbinate turbinate probe consisted of two parallel needles with 24.5mm exposed electrodes.
sparing turbinate reduction technique, in conjunction with turbinate out-fracture, or turbinate obstructing the valve area. In our series, RFTA has thus facilitated greatly Surgical technique
probe is slid out of the turbinate (Surgitron In the office / clinic setting, the patient is 4.0 Dual Frequency radiofrequency genera- reduced complications to minimal levels.
tor, Ellman International, Oceanside, NY, USA). This setting utilises 19 watts, which Postoperative period
For patients treated with RFTA as an isolated amount of 1% lidocaine with 1:100,000 epi- procedure, there is no recovery period. Our nephrine, to anaesthetise the turbinate, but patients occasionally require acetaminophen not give the patient excessive side-effects ‘paracetamol’ for analgesia, but often need of epinephrine uptake. Five to ten minutes nothing, and can resume normal activities Figure 2: Algorithm for choice of turbinate reduction techniques. ENTNews | JUL/AUG 2008 | VOL 17 NO 3 as long as they avoid straining. Nasal emollients and saline are rec-ommended as needed. The patients were seen one month later. In5% of our series, a small crust was noted and removed. At this time,patients with soft-tissue hypertrophy of the turbinates should feelsubstantially improved. Those in whom complete relief has notbeen achieved can be scheduled for other nasal surgery in the ORsuch as septoplasty. For patients who have undergone RFTA in con-junction with other nasal and sinus procedures, standard FESS / sep-toplasty / rhinoplasty care is given, but is much lessened by thereduced morbidity of RFTA versus resection.
Our experience
The author has performed 438 RFTA procedures using this technique,
with follow-up from one month to five years, in patients ranging from
18-85. The procedure was well tolerated by all of the patients. A sub-
stantial proportion of patients were managed for nasal obstruction
causing CPAP failures in OSAS. Two hundred and twenty of the cases
were performed in the office / clinic, with only four episodes of bleed-
ing requiring conservative treatment. Notably, all four of these patients
had been on anticoagulant therapy, and were treated in the office /
clinic to avoid the risk of anaesthesia. No cases of atrophic rhinitis,
crusting, synechiae, dryness, persistent crusting, olfactory disturbance,
synechiae, necrosis, or any other complication were noted in RFTA-
treated turbinate tissue in either the isolated or combination RFTA
groups. Substantial decrease in the bulk of the turbinate was observed
in all cases. The only patients who ultimately required OR surgery (sep-
toplasty, FESS, or rhinoplasty), were those who were identified preop-
eratively as having bony and cartilaginous deformity, and had elected
RFTA as a minimally invasive procedure, or as a way to avoid OR risks.
More than half of patients whom the author recommended for OR
surgery were satisfied with the improvement from RFTA, despite indi-
cations for more invasive surgery.
Conclusion
Radiofrequency Turbinate Ablation (RFTA) is a safe and highly effec-
tive technique for symptomatic nasal obstruction refractory to
medical therapy, and attributable to hypertrophy of turbinate soft
tissue. Bipolar RFTA preserves the turbinate mucosa, thus minimis-
ing the risk of complications and physiological disturbances from
turbinate reduction. When used in conjunction with excisional
techniques to reduce obstructive turbinate bone, it facilitates
mucosal preservation for the remainder of the turbinate, thus
improving patient tolerance and outcomes. Thus, RFTA should be
considered an effective and cost effective option in the treatment of
nasal obstruction. n
References
1. Rice DH, Kern EB, Marple BF, Mabry RL, Friedman WH. The turbinates in nasal and sinus surgery: a consensus statement. Ear Nose Throat J. 2003;82(2):82-4.
2. Sapci T, Sahin B, Karavus A, Akbulut UG. Comparison of the effects of radiofre- quency tissue ablation, CO2 laser ablation and partial turbinectomy applications
on nasal mucociliary functions. Laryngoscope. 2003;113(3):514-9.
3. Carrie S, Wright RG, Jones AS, Stevens JC, Parker AJ, Yardley AP. Long-term results of trimming of the inferior turbinates. Clin Otolaryngol Allied Sci. 1996;21(2):139-41.
4. Coste A, Yona L, Blumen M, Louis B, Zerah F, Rugina M, Peynegre R, Harf A, Escudier E. Radiofrequency is a safe and effective treatment of turbinate hypertro-
phy. Laryngoscope. 2001;111(5):894-9.
5. Utley DS, Goode RL, Hakim I. Radiofrequency energy tissue ablation for the treat- ment of nasal obstruction secondary to turbinate hypertrophy. Laryngoscope.
1999;109(5):683-6.
6. Elwany S, Gaimaee R, Fattah HA. Radiofrquency bipolar submucosal diathermy of the inferior turbinates. Am J Rhinol. 1999;13(2):145-9.
Competing interest:
Dr Greene’s research on Radiofrequency Ablation of the Turbinates
has been financially supported by Ellman International, Inc.
ENTNews | JUL/AUG 2008 | VOL 17 NO 3