Between July 2009 and April 2010, 11 consecutive patientsunderwent mucosal advancement flap repair and Permacolinjection for complex anal fistula in our institution.
Inclusion criteria for this study were age between 18 and75 years and the presence of a complex anal fistula, definedas Crohn's, rectovaginal, and high trans-sphincteric fistulas.
Patients' characteristics are resumed in Table All patients underwent outpatient clinic evaluation and preoperative MRI and/or endoscopic ultrasound. Fecalincontinence before and after surgery was evaluated usingthe Fecal Incontinence Severe Index (FISI) score. Patientswith a score >6 underwent anal manometry before surgery.
All procedures consisted in two-stage approach.
Surgical technique, stage I On the day of the surgery, anenema was administered to the patient. All patientsunderwent surgery under general anesthesia in lithotomyposition and broad-spectrum antibiotics given at induction.
The internal orifice was found using oxygen peroxideinjection through the external opening and gently probed.
At this point a non-cutting seton (Silicone Surgical Vessel Fig. 1 Flap preparation (mucosa, submucosa, and a small amount of Loop, Dev-o-Loop, Mini-red, Covidien) was placed for a internal sphincter fibers) after >6 weeks drainage seton insertion period of at least 8 weeks aiming adequate drainage of the which aimed draining the fistula tract thus abolishing collateral tractswhile transforming it in a more straight one sepsis and followed up routinely as outpatient.
Surgical technique, stage II Surgery was performed in a The flap base was performed large enough to avoid its day surgery setting, under general anesthesia in the ischemia and mobilization to avoid tension. The fistula tract lithotomy position. Initial step was the identification and was probed, curetted, and irrigated with saline. The internal creation of an elliptical excision below the internal opening opening underneath the mobilized flap was not closed encompassing 20–30% of the circumference of the anus.
before suturing. The flap was sutured distally using full- The rectal flap, fashioned with mucosa, submucosa, and a thickness-interrupted vicryl 2-0 sutures (Fig. At this small amount of internal sphincter fibers, was adequately point, liquid dermal porcine matrix (Permacol Injection, mobilized to overlap and cover the internal opening.
Covidien plc, Dublin, Ireland) was gently injected in the Particular care on hemostasis was given to prevent retrograde manner through the external orifice to fill the entire tract. The entire procedure was performed under 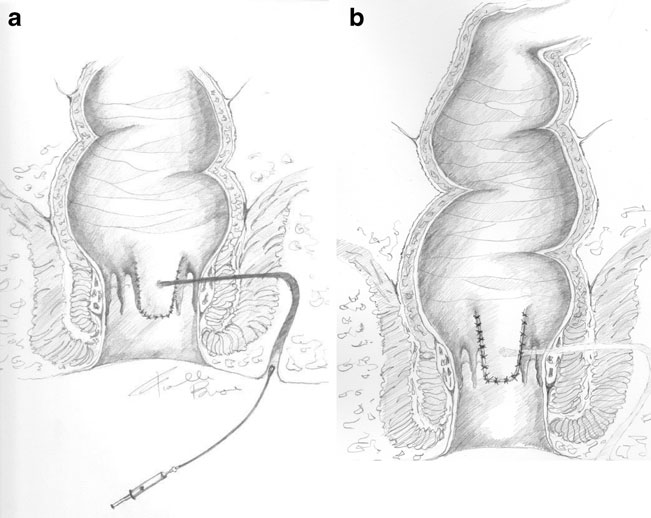