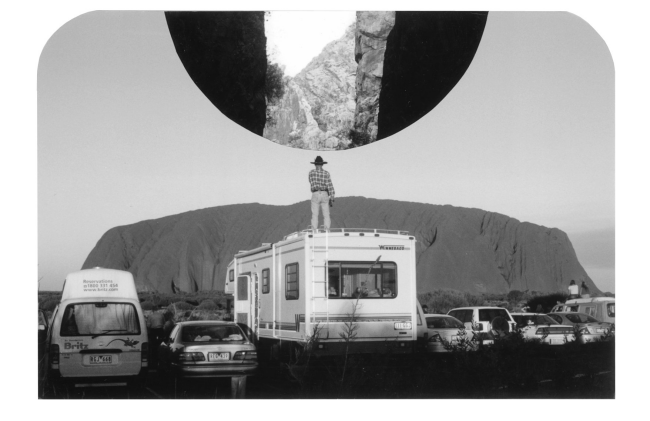 Chapter Four: Songlines
One day walking across the Todd, I spotted a small mob of Aboriginal women who’dprobably made the dry river bed their home. Many lived in the Todd, under the stars. Ithad also become quite unsafe for homeless Aboriginal people, since drunkenness andviolence had become a fact of life. A few hundred metres away I saw a dorky tourist, inkhaki shorts and Akubra hat, attempting to throw a boomerang - looking like a real fool.
In town I soon discovered a wonderful café, Bar Doppio, just off the Todd Mall in a littlefinger lane, where the caffeine-addicted and transplanted Southerners spent their freetime enjoying a good espresso coffee. One of the waitresses, Naomi, had ridden herbicycle from Melbourne and got as far as the Alice and decided to stay. Having theopportunity to work at the best café for 1500KM on either side would have be a goodincentive for almost anyone to stop here.
My last day in Alice Springs was spent with my parents, before their train journey backto Melbourne. We took a walk along Todd Mall visiting the historic Adelaide House, theformer Alice Springs Hospital, now a museum. It had been established in the 1920s bythe remarkable John Flynn, founder of the Royal Flying Doctors Service. The buildingboasted a unique water and air cooling system. Another pioneer, at the same time asFlynn, had been the radio technician Traeger. Here he had developed a pre-computer device for sending and decoding text messages sent via wireless Morse code. Sendingtexted messages was not such a new thing after all!On the morning of the 24th July, a five-and-a-half hour’s bus trip from Alice Springs toYalara was made. The first stop was at Stuarts Well, where we had the opportunity totake a five minutes ride on a camel, at a fee. I vouched to take some pictures and searchout a coffee instead. The first shot of caffeine for the day, much required, came tepid andin a stylofoam cup. There was more taste of cup than coffee. No more Bar Doppio.
Pleasure at last came when at the Yalara Resort I could once and for all relieve myselffrom bus travel. Here at the YHA reception I was given a key, to a 4-bed dorm, completewith a fridge, which I was to share for the four nights stay. The first night there was awoman from Sydney and a giant toddler of a bankteller from Melbourne.
On my first morning at Yalara I was up early to view the sunrise. From a hillockoverlooking the resort there was the distant rock - Uluru (Ayers Rock), bathed in amorning glow. My only company, a young Polish traveller from Zakopané.
After five days rest, I was back on my bike for some semi-serious cycling, althoughwithout panniers. I made my way out to Uluru. It had been over 18 years since my lastvist to the “rock”. Then like many people it had been my objective to climb it, howeverthis time around I was not at all interested. These days many travellers and tourists alikeare starting to listen to the advice from the local Anangu people, to show a sign of respectby not climbing the rock. And, quite franky it is better to stand back, contemplate a littleand observe this wonderous monolith from some viewable distance. Nonetheless likehoney ants could be seen a slow line of people, which the Anangu refer to as the “MingkaMob”, making their way up the steep face of Uluru to its summit.
A short distance from the base of Uluru is the harmoniously designed Anangu CulturalCentre. Here I picked up a little folding brochure with superb diagrams illustrating andexplaining the Mala and Mutitjula walks. Easily accessible to anyone, they are ondifferent sides of the Rock, which has a base radius of approximately 9KM. Taking theseleisurely walks, the Rock’s enormous size became evident, while something of thespiritual significance of place and country could be experienced. I’d travelled across thisland, making my own particular songline to appreciate a deeply special place.
The 10KM ride back to Yalara Resort was soon joined by a “Mingka Motor Mob”hurrying back for their evening meal. When I returned to my room, the Sydney womanhad left and been replaced with a young American traveller named Jill, from Connecticut.
Although she lived in Washington DC she spent much of her time on the Caribbeanisland of St Martin. A year before I’d read Patrick Leigh Fermor’s classic The TravellersTree, and been intrigued by a little-known island called Saba, which he’d visited in 1949.
I mentioned this to Jill and asked if she’d been there. Her eyes lit up and a big smileswept across her face. “As you happen to know…,” she went on in her high New Englandaccent, “I’ve got a little present for you”. She dug into her rucksack. Out came an orangeT-shirt all neatly folded, which she flapped and before me were the words displayed“Hike Saba – Netherlands Antilles”. Wow! This really made my day. Although a size too

Traveller’s Diarrhea This fact sheet provides basic information only. It must not take the place of medical advice, diagnosis or treatment. Always talk to a healthcare professional about any health concerns you have, and before you make any changes to your diet, lifestyle or treatment. What is traveller's diarrhea? Traveller's diarrhea is frequent, loose, or watery bowel movements resulti