Biotechnol. Appl. Biochem. (2001) 33, 85–89 (Printed in Great Britain)
Erythrocyte-mediated delivery of dexamethasone in patients
with chronic obstructive pulmonary disease
Luigia Rossi*, Sonja Serafini*, Luigi Cenerini†, Francesco Picardi†, Leonardo Bigi‡,
Ivo Panzani‡ and Mauro Magnani*1
*Istituto di Chimica Biologica ‘ G. Fornaini ’, UniversitaZ degli Studi di Urbino, Via Saffi 2, 61029 Urbino (PU), Italy, †Ospedale ‘Fraternita di S. Maria della Misericordia’, Via Bonconte da Montefeltro, 61029 Urbino (PU), Italy,and ‡Di.De.Co. S.p.A., Via Statale 12 Nord, 41037 Mirandola (MO), Italy Human erythrocytes from ten patients with chronic
should be considered if a reversible component in COPD is obstructive pulmonary disease (COPD) were loaded
present. In fact, oral steroids appear to be beneficial for with increasing amounts of dexamethasone 21-phos-
acute exacerbations, giving faster impovement in FEV (i.e., phate and were re-infused into the original donors.
forced expiratory volume in 1 s) and fewer relapses [6].
Drug-loaded erythrocytes acted as circulating bio-
However, it is important to note that glucocorticoids reactors, converting the non-diffusible dexamethasone
have a short half-life (approx. 3 h), which make frequent 21-phosphate
diffusible
dexamethasone.
administrations and high dosages necessary. Consequently, Pharmacokinetic analyses on these patients showed
this causes a dangerous peak in plasma concentration, toxic that a single administration of drug-loaded erythrocytes
side effects and poor patient compliance, especially during was able to maintain detectable dexamethasone con-
the chronic use of the drug. Moreover, when corticosteroids centrations in blood for up to seven days. This contin-
are administered by inhalation, only a low percentage of the uous release of dexamethasone was paralleled by the
drug (7 %) is able to reach the lungs, thus compromising the suspension of β -agonist and oral corticosteroid treat-
therapy. Therefore alternative strategies that are able to ments by all of the patients.Thus dexamethasone 21-
reduce the toxicity of the drugs, allow prolonged application phosphate-loaded erythrocytes are safe carriers for
intervals and use different kinds of administration could be of corticosteroid analogues and are a useful alternative to
clinical importance for the treatment of COPD.
frequent oral or inhaled drugs in elderly patients with
It is known that human erythrocytes, owing to the noteworthy ability of their membrane to be opened andresealed [7], provide an extraordinary vehicle for thedissemination of drugs in the circulation. Moreover, Introduction
engineered erythrocytes have been proposed as carriers andbioreactors suitable for use in the treatment of various Chronic obstructive pulmonary disease (COPD) is a major diseases [8–13]. Previous experiences in our laboratory [14] cause of morbidity and mortality in adults [1]. It includes have demonstrated that the non-diffusible pro-drug dexa- bronchitis (unspecified and chronic), emphysema, asthma methasone 21-phosphate can be entrapped in human and acute exacerbations of chronic bronchitis. In COPD, erythrocytes where it is slowly dephosphorylated to the inflammation of the airways is a pathogenic factor, inducing corresponding diffusible dexamethasone by erythrocyte- chronic sputum production, parenchyma destruction and a resident enzymes. Furthermore, a new apparatus called ‘ Red decrease in lung function as a result of airway obstruction.
Cell Loader ’ that allows the encapsulation of drugs in human Since glucocorticoid hormones are potent anti-inflammatory erythrocytes for clinical use is now available [15]. Thus, based drugs [2], they could act as efficient therapeutic agents for on the above mentioned considerations, we evaluated the the treatment of COPD. In fact, there are data that support potential use of autologous erythrocytes with encapsulated the use of systemic corticosteroids in the treatment of acute dexamethasone 21-phosphate as a slow delivery system exacerbations of COPD [3,4], although benefits deriving from long-term use of corticosteroids to manage chronicCOPD have not been demonstrated. Despite the lack ofevidence for this approach, inhaled corticosteroids are Key words : corticosteroids ; drug delivery ; erythrocytes.
widely used for the treatment of severe COPD, especially in Abbreviations used : COPD, chronic obstructive pulmonary disease ; FEV , the United States [5]. Moreover, the use of corticosteroids 1 To whom correspondence should be sent (e-mail magnani!bib.uniurb.it). 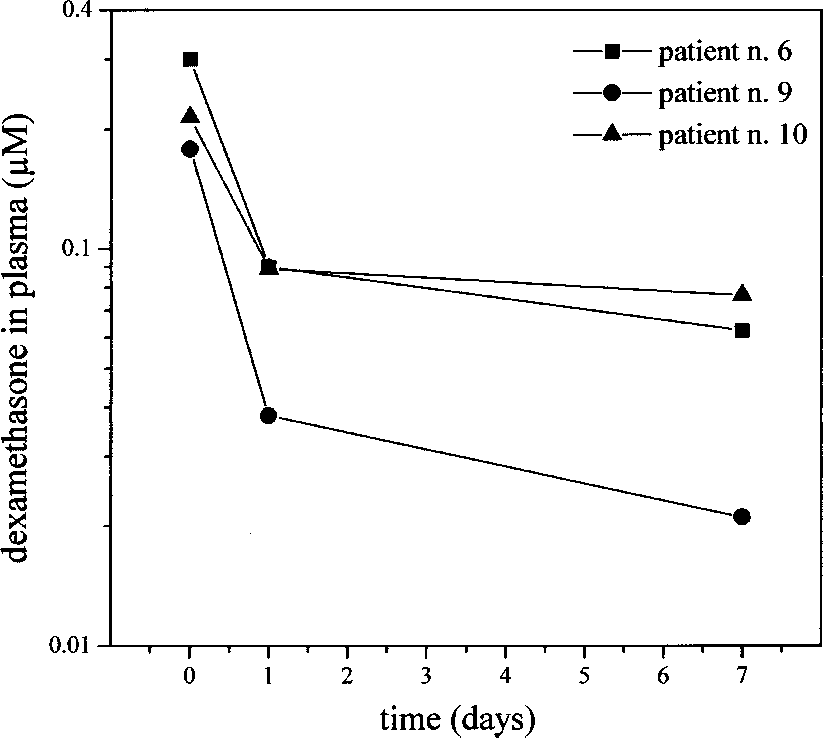 present in the circulation 1 week post-infusion of dexa- chronically treated with steroids for at least 10 years. Thus methasone 21-phosphate-loaded erythrocytes.
the only possible monitoring was of the reported clinicalsymptoms and medical examinations.
The first group of patients was treated with increasing Clinical evidence
amounts of dexamethasone 21-phosphate to evaluate the The patients enrolled in the clinical trial were all suffering safety and efficacy of the procedure. Since no problems from severe COPD. All ten patients chronically used short- developed following erythrocyte infusion and overall clinical and\or long-acting β agonists and systemic, oral or inhaled benefits were obtained, a second group of patients received corticosteroids. Following the administration of dexa- two infusions of loaded erythrocytes at 2-week intervals. In methasone 21-phosphate-loaded erythrocytes, all patients this case, patients reported good health, which was borne suspended these therapies and were requested to record out above all by the fact that they never used steroids at least the time at which they felt the need to take these drugs.
up to 1 month post-erythrocyte infusion. The clinical benefits Patient 2 resumed inhaled corticosteroids 4 days post- observed were supported by the results of preliminary infusion. The other patients did not resume taking the drug pharmacokinetic studies of a third group of patients, which for at least 10 days post-infusion. It is worth noting that revealed the presence of dexamethasone in the circulation patients 6–8, who received two administrations of drug- up to 7 days post-infusion. Longer periods of time were not loaded erythrocytes at 15 day intervals, still did not need evaluated, but, given the results obtained (see Figure 1), we corticosteroids 1 month after the last infusion. During the can assume that low amounts of dexamethasone continue to same period, all patients were also monitored for the use of be present in the circulation for a longer time. Furthermore, β agonists. All patients avoided the use of β agonists for it is noteworthy that the best clinical benefits were obtained different periods of time (Table 1) and reported a decrease by administering, twice in a month, an amount of dexa- in coughing, breathing difficulties and brochospasms. Fur- methasone (3.7 mg on the average) that is much lower thermore, for all patients the physicians reported a reduction (approx. 25–50 times) than that usually administered in or absence of bronchostenosis and a reduction of dyspnoea.
therapeutic protocols (4 mg\2–3 times a day per patient).
Morover, in all patients (except patient 2) there was areduction in breathing difficulty, bronchospasm, broncho- Discussion
stenosis and dyspnoea, together with a remarkable reductionin the need to take β -agonists and corticosteroids.
In the present paper we report the first clinical study in We are confident that this procedure will be useful for which patients were treated with autologous erythrocytes the administration of drugs for which a slow and prolonged modified to act as bioreactors for the slow delivery of release in the circulation is needed. Further studies of drug corticosteroids in the circulation. In this study, patients delivery in vivo in human patients are in progress.
with COPD were treated with autologous erythrocytesloaded with the non-diffusible prodrug dexamethasone 21-phosphate. Once re-infused into patients, dexamethasone21-phosphate is slowly dephosphorylated by erythrocyte- Acknowledgments
resident enzymes (K l 11.1±0.6 mM ; V l 7.4±0.2 nmol\ h per mg of haemoglobin [14]) to dexamethasone, a We thank the patients and physicians of the ‘ S. Maria della corticosteroid able to reduce airway inflammation in Misericordia ’ Hospital of Urbino (Italy) for their invaluable collaboration. This work was partially supported by the Ten patients with COPD were enrolled in our clinical National Research Council. Target Project on Biotech- study. After the infusion of autologous dexamethasone nology. The ‘ Red Cell Loader ’ was provided by Di.De.Co.
21-phosphate-loaded erythrocytes, they were monitored essentially to evaluate clinical symptoms and the number ofdays that passed without taking their usual drugs (β -agonists and steroids). In fact, the parameter that most significantly References
provides evidence for lung function (FEV ) could not be determined, since all of the patients were unable to perform Higgins, M. W. and Thorn, T. (1990) in Clinical Epidemiology of the test correctly due to an advanced age and bad-general- Chronic Obstructive Pulmonary Disease (Hensley, M. J. and health status. We also considered other determinations to Saundres, N. A., eds.), pp. 23–43, Marcel Dekker, New York monitor possible side effects of corticosteroids, such as Haynes, R. C. (1990) in The Pharmacological Basis of assesment of ocular pressure and a computerized study of Therapeutics (Gilman, A. G., Rall, T. W., Nies, A. S. and Taylor, bone density, not significant, since all patients had been P., eds.), pp. 1431–1457, Pergamon Press, New York

Exhibit 99.5 Modification of the Presentation of LossesThis report is for informational purposes only. It should be read in conjunction with documents filed by The Chubb Corporation with the Securities and Exchange Commission, including the most recent Annual Report on Form 10-K and Quarterly Reports on Form 10-Q. THE CHUBB CORPORATION Beginning in the third quarter of 2008, the “net