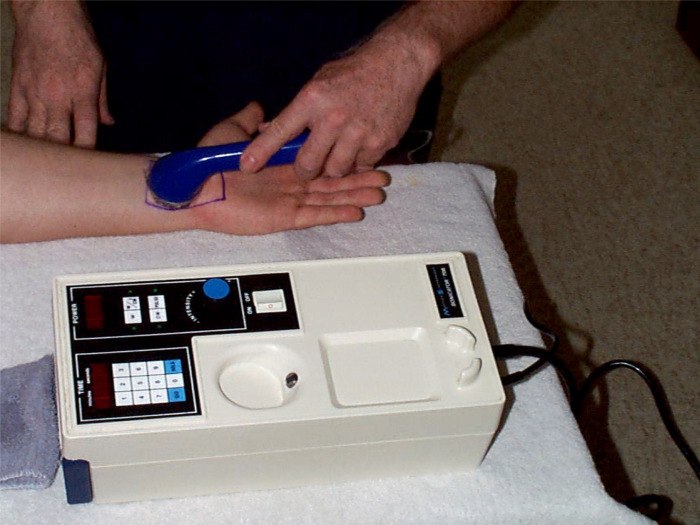 INFLAMMATION CONTROL WITH ULTRAHIGH
FREQUENCY SOUND
Lyn Paul Taylor, A.A., B.A., M.A., R.P.T.
(Editing Assistant and Computer Consultant: Joanna Soon, B.S.)
It has been demonstrated that ultrahigh frequency sound (ultrasound) may be used to
drive chemicals into living tissues. This process is called phonophoresis. It is thought
that ultrasound's demonstrated ability to increase cell membrane permeability may be a
major factor in this process, allowing whole molecules of a particular medication (if
small enough) to be driven into the tissues (hydrocortisol is a prime cited example).
Additionally, it is thought that increased cell membrane permeability may be augmented
by radiation pressure produced by the ultrasound, forcing the medication away from the
transducer head into the tissues.
Phonophoresing a carpal tunnel
An effect called acoustic streaming apparently causes the medication forced into the
tissues to follow the well-focused ultrasound beam into the tissues, concentrating the
medication in the tissues in the path of the beam, with some of the medication ultimately
reaching the extreme depth of ultrasound penetration. Following phonophoresis,
measurable amounts of hydrocortisone have been recovered from skeletal muscle tissue,
at least six cm. below the skin.
Population and double blind studies on humans have been performed testing the efficacy of phonophoresis. The results of these tests have varied a good deal. All tests
have shown, however, that subject groups suffering from pain demonstrate a statistically
higher success rate when treated with anti-inflammatory chemicals, or analgesics,
applied through phonophoresis than those groups treated with a placebo and ultrasound,
or a placebo and ultrasound at zero intensity. Clinically, the phonophoresis of various
medical preparations has been shown to be a safe alternative method for the delivery of
concentrated doses of chemical agents without the risk of the infection and pain inherent
in percutaneous injections.
Application:

• The ultrasound unit should be preset to deliver a 1 Mhz, pulsed waveform, at between
• A medical preparation containing an anti-inflammatory active ingredient (topical
ibuprofen is preferred) should be thinly and evenly spread over the treatment site.
• The sound head should be applied with a light touch, in an even distributing manner.
The sound head should be slowly moved over the treatment site (being careful to keep
the sound head flat up against the skin) in continuous circle within a circle motion, or
as continuous stroking back and forth motions. The sound head should be moved at a
slow, steady rate. If a stationary sound head and a pulsed waveform are used, no
motion of the sound head is necessary, but the practitioner should remain in constant
attendance, being careful to maintain the subject's comfort.
• Treatment should continue for six minutes (assuming an area less than or equal to 72 • Treatment should occur daily until treatment goals are reached.
Of the techniques explored to date, by far the most effective means of relieving soft tissue inflammation has been shown to be the phonophoresis of anti-inflammatories
directly into affected tissues.
Of the anti-inflammatory medical preparations commonly used in phonophoresis for the treatment of soft tissue inflammation, hydrocortisone is the best known. Its
beneficial effects include its ability to decrease cell membrane permeability, thereby
preventing further bradykinin and other irritant components (the precursors of
prostaglandin) from being released from the cell, and its ability to stabilize lysosome
bodies. These attributes aside, corticosteroid treatment can result in some bad side
effects (i.e., it can make things a lot worse). The cortisone used is derived from non-
human sources and, as a result, can serve as an irritant by virtue of its incompatibility
with the subject’s own biochemistry. Consequently, the author is less than enthusiastic
about using hydrocortisone for phonophoresis due to the uncertainty of its direct effect on
the pain.
Some practitioners have begun to treat human inflammations with the phonophoresis of various salicylates. These are generally selected for their ability to
retard the formation of prostaglandins through the inactivation of cycloozygenase, an
enzyme that converts fatty acids into concurrent interstitial swelling. Clinical experience
has shown this treatment to be effective, but comparatively slow.
The phonophoresis of di-alpha tocopheryl (vitamin E) reportedly provides the
effect of decreasing cell membrane and capillary bed permeability (providing much of the
beneficial effect expected of hydrocortisone) with the added facility of suppressing
histamine production and relieving venule constriction (claudication). This treatment
provides fairly rapid relief of pain without the dangers to renal function posed by the
salicylates. Phonophoresis of di-alpha tocopheryl has also been found to be useful in
increasing the healing rate of open wounds and reducing scar formation.
Ibuprofen in topical form has been clinically shown to be superior to all the other
above-mentioned chemicals for stopping the inflammation process when sonicated into
irritated tissues. It does this by dramatically halting the production of prostaglandins.

Conference in Bolivia, 1999 ① Conference in Bolivia Feb 24thCase 52 yo M, married, farmerPresented by Dr. M., residentPast history； DM×2y. Pulm.TBC×1y(completed treatment for 8mo). Alcohol×17years. Present il ness(summarized briefly)；8days ago, he started to have a precordial pain with diaphoresis. The pain lasted 17 hours. He was given a sublingual drug at an outside clinic and he