Revue de presse ANGLAIS
Semaine du 10 au 17 mars 2008
Time –March 10, 2008
Courrier International – Du 06 au
12 mars 2008
Rocker-activist Bob Geldof joined the U.S. President
during his recent Africa trip for a wide-ranging discussion Royaume-Uni
on aid, America and doing laundry on the road From gay marriage to unwed professionals having kids, Etats-Unis
Spain is undergoing a remarkable social revolution Why Spaniards are breaking up like never before Economie
Singing benches, smart refrigerators and walls that change « color at the touch of a button: Samsung presents the Technologie
Newsweek – March 10, 2008
Sciences
World affairs
Dossier « Le retour de la guerre des sexes »
: an epidemic of young suicides Etats-Unis : « sweeps an old Welsh coal area, linked only by a social- networking Web site (By Rod Nordland).
Business
Financial Times – March 13 2008
: Wal-Mart stocks falafel, olives and
Islamic greeting cards to attract Dearborn's ethnic Analysis
: The UK government has declared victory in a three-year drive to make itself $46bn more efficient. But critics say : endangered animals are the new blood this was achieved by means of shortcuts and at the diamonds as militias and warlords use poaching to fund expense of needed services (by Nicholas Timmins). death (By Sharon Begley). US News – March 10, 2008
Financial Times – March 10 2008
Special Report
Analysis
Picture power : cartoonists wield a mighty pen,
especially in election years (By Dan Gilgoff). : foreigners based
temporarily in Britain will learn this week how the Health, Money and Education
Treasury is to alter their fiscal treatment. The effect on Air quality – The smallest of pollutants are linked to
the economy is uncalculable (By Vanessa Houlder).
outsize health risks : can steering clear of particles
from trafic fumes protect the heart ? (By Adam Voiland) 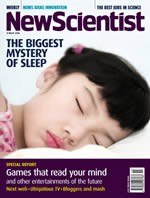 The Guardian Weekly – March 14-
New Scientist – 15 March 2008
International news
Water-starved Crete facing £800m tourist
development : A British property development company
is planning five exclusive holiday villages, a string of « super luxury » hotels, three golf courses and a marina in one of the most remote and ecologically fragile areas of Greece. Special Report
Climate changes : it's profit now : In turbulent
That's entertainment : You don't have to be a ggek to economic times, will corporate social responsibility be
love it. Technology is transforming our lives, especially forced to the sidelines ? (By Terry Macalister) - : Science
When everybody can be a journalist or film-maker, what Window on our dreams : a new computer technique
happens to the media? We're finding out right now, says can tell what someone is looking at just by scanning - We
spend around a third of our lives doing it, so we assume International development
sleep must be crucial for our survival. But that may not Closing Australia's great health gap : Canberra hopes a
US scheme can improve Aboriginal child health (By over, but will we still watch our televisions once cellphones and the web catch up?-: What will the next era of internet culture bring? Annalee Newitz predicts a web that's less risky but has lost its brainwave-reading headsets mean at last we can control computer games with thought alone, as Duncan Graham-