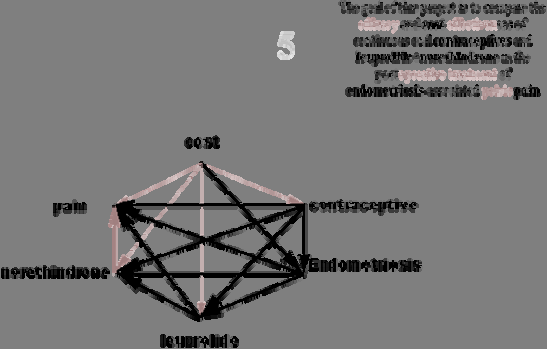 Case Study of Endometriosis
There were 3,637 articles dealing with endometriosis entered into PubMed during the
period 1990 through 2002. These articles were analyzed using Idea Analysis and the
resulting data entered into a knowledge base. There were over 23,000 ideas identified.
Figure 1 shows the terms and ideas from a critical sentence (sentence 5) in the abstract.
This research proposal described a randomized study comparing oral contraceptives
versus the combination of leuprolide and norethindrone following surgery to remove
endometriosis adhesions. The informative terms are highlighted in the sentence. The
terms – efficacy, effective, operative, treatment and pelvic – were not in the knowledge
base vocabulary and that fact is denoted by the red highlighting. Each of those in grey are
nouns and eligible for inclusion in the endometriosis vocabulary. However, their
contribution to understanding endometriosis was considered minimal. Decisions such as
these are arbitrary and subject to change as the subject experts employ terms with
increasing frequency in describing the topic. Black lines connect terms forming ideas that
had been previously reported and entered in the endometriosis knowledge base. The thin
grey lines connect terms forming ideas that were missing from the knowledge base.
Figure 1. Terms and Ideas from Sentence 5 in the Approved Grant Application --
5R01HD044870.
The predominant missing ideas were associated with cost. One of the objectives in the research proposal was the determination of costs associated with the two treatment regimens. However the primary objective was to compare the comparison of leuprolide and norethindrone versus oral contraceptives in a randomized study. The author stated
that this would be the first such clinical trial.
Randomized Clinical Trials: Four articles were published during the period, 1987 –
2002, dealing with randomized clinical trials of post-operative treatments to control the
recurrence of endometriosis and/or control of associated pelvic pain.
Danazol vs. Medroxyprogesterone: Telimaa et al [Telimaa 1987] evaluated the clinical
efficacy and tolerance of danazol, a gonadotropin inhibitor, versus high-dose medroxy-
progesterone acetate (a progestin) in the treatment of mild-moderate endometriosis. The
authors indicated that total or partial resolution of peritoneal implants was observed in
60% of the patients receiving danazol and in 63% of the patients receiving medroxy-
progesterone. They reported that danazol and medroxyprogesterone significantly
alleviated endometriosis-associated pelvic pain, lower back pain and defecation pain, but
they did not differ from each other in these actions.
Danazol vs. Buserelin: Dmowski et al [Dmowski 1989] compared the effectiveness of
Buserelin (an agent that decreases production of testosterone) and danazol in inducing
ovarian suppression for the management of endometriosis. They reported that they the
two agents induced a similar degree of ovarian suppression resulting in a comparable
clinical improvement and regression of endometriotic lesions.
Gonadotrophin-Releasing Hormone Analogue vs. Leuprolide: Busacca and
colleagues [Busacca 2002] reported results of a study of 89 women randomized to
receive monthly injections of gonadotrophin-releasing hormone analogue plus leuprolide
(n = 44) or no additional treatment (n = 45). They indicated that there were no
differences in pregnancy rate or pelvic pain occurrence.
Leuprolide Plus Four Randomized Regimens: Surrey et al [Surrey 2002] reported
results of a randomized clinical trial. They indicated that all patients received monthly
leuprolide and were randomized to one of four groups:
1.
Daily norethindrone and low dose conjugated equine estrogens; and Daily norethindrone and higher dose conjugated equine estrogens. They indicated that symptom and pelvic examination scores remained significantly below
baseline for at least 8 months after completion of therapy for all four groups. No
differences between the treatment regimens were reported.
Frequency of Occurrence of Ideas: The frequency of occurrence of each idea is an
indicator of stability in describing the topic. For example, progesterone linked with other
terms occurred 61 times in the knowledge base. Oophorectomy ideas occurred 38 times.
Danazol ideas occurred 93 times, estrogen ideas 104 times, and gonadotropin ideas 46
times. Infertility ideas occurred 475 times, pregnancy ideas 169, and menopausal ideas
54 times. The median number of ideas per term was 62 in the set of terms not used by
the author. In contrast, the median number of ideas per term was 33 in the set of terms
used by the author. The distributions are shown in Figures 2 and 3. Figure 2 shows the
distribution of idea frequency of terms from the knowledge base not used by the author.
Figure 3 shows the distribution of idea frequency of terms from the knowledge base used
by the author.
These displays indicate an important issue in creative action. Authors tend to include less
frequently occurring ideas in their research. While some of the terms included are used
to anchor the new proposal to existing knowledge and thus occur frequently in writings,
the new ideas will be more recent additions to the knowledge. This fact seems to contrast
with the well established assumption from linguistics that the prevalent terms represent
the language of the topic. The distinction between term frequency and idea frequency is
an important one. The former is an indicator of language. The latter is an indicator of
how the language is used. To understand creativity, it is necessary to determine usage.
Figure 2. Distribution of Idea Frequencies for Terms Not Used by the Author.
Terms not Used by Author

Figure 3. Distribution of Idea Frequencies for Terms Used by the Author

Terms Used By Author
Figure 4 shows the terms and ideas related to endometriosis from the knowledge base. Each of the terms is shown with the frequency of ideas involving endometriosis with the 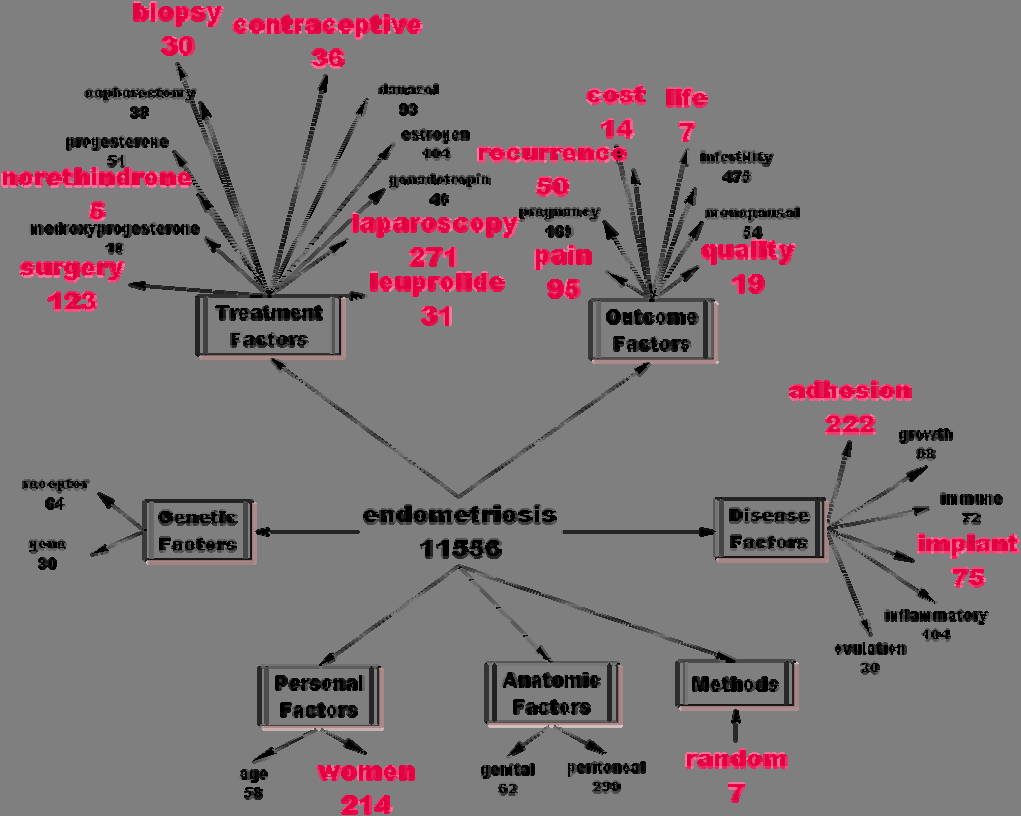 New Randomized Study: The preceding studies set the stage for the proposal presented
by the author of the approved CRISP grant application. With reported equivalence in
pregnancy, pain control and recurrence associated with previous treatments, the author
stated that the proposed study was designed to recognize the difference between the two
randomized regimens (i.e., oral contraceptives vs. leuprolide plus norethindrone) using
pain as the primary measure and cost as a secondary one.