Face Recognition in the Dark ∗
†Equinox Corporation ‡Equinox Corporation {andrea,diego}@equinoxsensors.com Abstract
recognition algorithms are the locations of both eyes. Theseare normally used to align the detected faces to a standard Previous research has established thermal infrared imagery template prior to more complex feature extraction and com- of faces as a valid biometric and has shown high recogni- parison. To date, thermal infrared face recognition algo- tion performance in a wide range of scenarios. However, rithms have relied on eye locations that were either man- all these results have been obtained using eye locations that ually marked by a human operator [3, 6, 1, 4, 7], or au- were either manually marked, or automatically detected in a tomatically detected in a coregistered visible image [8].
coregistered visible image, making the realistic use of ther- The results of such studies cannot be extrapolated to situ- mal infrared imagery alone impossible. In this paper we ations such as real-time face recognition at night, where a present the results of an eye detector on thermal infrared coregistered visible image may be unavailable or heavily imagery and we analyze its impact on recognition perfor- mance. Our experiments show that although eyes cannot In this paper, we present results of a detection algorithm be detected as reliably in thermal images as in visible ones, applied to thermal infrared eye images. We compare these some face recognition algorithms can still achieve adequate results with ground-truth data as well as with results ob- tained by a visible eye detector and we observe that al-though the localization error is larger in the thermal infraredthan in the visible, the distance between the detected and the Introduction
actual eye center location stays within 15% of the eye sizein both modalities.
Over the last few years, there has been a surge of interest Previous research [4] has shown that face recognition in face recognition using thermal infrared imagery. While performance with thermal imagery is much more sensi- the volume of literature on the subject is notably smaller tive to eye location errors than its visible counterpart. As than related to visible face recognition, there is nonetheless reported in that study, correct recognition rates using the a steady stream of research [1, 2, 3, 4, 5]. Although they PCA algorithm with Mahalanobis angle distance drop sig- mostly relied on databases limited in size and variability, nificantly when the eye locations are randomly perturbed these papers have established that thermal imagery of hu- in a 3x3 pixel window centered at the manually-located man faces constitutes a valid biometric signature. Thermal eye center. The reported performance drop is consider- imagery has shown superior performance over visible im- ably larger than that suffered when perturbing eye locations agery with a variety of algorithms [1, 6]. More recently, and performing recognition with visible imagery. The au- results of time lapse recognition results were reported in thors therefore conclude that face recognition from thermal [4, 7]. Results in an operational scenario are presented in imagery is inherently more sensitive to registration errors.
That conclusion is not supported by our study.
A necessary step toward automated face recognition, in We use visible and thermal infrared eye detection algo- any modality, is the detection of faces and facial features.
rithms to geometrically normalize face images before ap- Face detection in the thermal infrared has been reported plying two recognition algorithms, PCA using Mahalanobis in [9]. The most common facial features required by face angle distance and the Equinox algorithm.
∗This research was supported in part by the DARPA Human Identifica- the impact of eye localization errors on recognition perfor- tion at a Distance (HID) program, contract # DARPA/AFOSR F49620-01-C-0008.
1Without the use of external illumination. 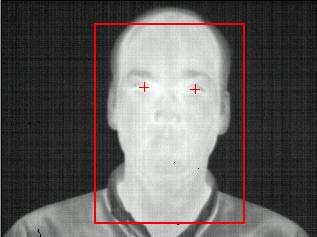 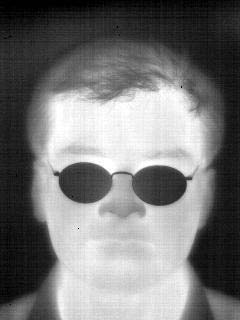 mance in both visible and thermal infrared images of vary- thermal infrared in general, is that it fails to detect the eye ing difficulty, indoors and outdoors. We observe that when center locations for subjects wearing glasses. Glasses are the eye detection error increases, recognition performance opaque in the thermal infrared spectrum and therefore show decreases more abruptly in the case of the weaker PCA al- up black in thermal images, blocking the view of the eyes gorithm and stays within reasonable bounds for the better (see Figure 2.) In these images the glasses can be easily performing Equinox algorithm. Contrary to [4], our finding segmented and the eye center location can be inferred from is that visible and thermal infrared performance decrease by the shape of the lens. Unfortunately, the errors incurred approximately the same amount. This may be due to the in- by such inference are rather large. For the experiments re- creased difficulty of the visible image set with respect to the ported in this paper, only images of subjects without glasses were used. Proper normalization of thermal images of sub-jects wearing glasses is an area of active research, publishedresults on which are forthcoming.
The Eye Detection Algorithms
In order to detect eyes in thermal images, we rely on theface location detected using the face detection and trackingalgorithm in [9, 10]. We then look for the eye locationsin the upper half of the face area using a slightly modifiedversion of the object detector provided in the Intel OpenComputer Vision Library [11].
Before detection we apply an automatic gain control al- gorithm to the search area. Although LWIR images are 12bit, the temperature of different areas of a human face hasa range of only a few degrees and thus is represented by atmost 6 bits. We improve the contrast in the eye region bymapping the pixels in the interest area to an 8 bit interval, Figure 2: Thermal infrared image of a person wearing The detection algorithm is based on the rapid object de- tection scheme using a boosted cascade of simple featureclassifiers introduced in [12] and extended in [13]. The We do not use the OpenCV object detection algorithm OpenCV version of the algorithm [14] extends the haar-like for eye detection in visible images. While this method does features by an efficient set of 45 degree rotated features and work reasonably well, we can obtain better localization re- uses small decision trees instead of stumps as weak clas- sults with the algorithm outlined below. This is simply be- sifiers. Since we know that there is one and only one eye cause we can take advantage of clear structure within the on the left and right halves of the face, we force the algo- eye region and model it explicitly, rather than depend on a rithm to return the best guess regarding its location. Figure generic object detector. We simply search for the center of 1 shows an example of face and eyes detected in a thermal the pupil of the open eye. The initial search area relies again on the position of the face as returned by a face detector [9].
Within this region, we look for a dark circle surrounded bylighter background using an operator similar to the Houghtransform widely used for detection in the iris recognitioncommunity [15]: max(r,x0,y0)|Gσ(r) ∗ δ This operator searches over the image domain (x, y) for themaximum in the smoothed partial derivative with respect toincreasing radius r, of the normalized contour integral of Figure 1: Automatic detection of the face and eyes in a ther- I(x, y) along a circular arc ds of radius r and center co- ordinates (x0, y0). The symbol ∗ denotes convolution andGσ(r) is a smoothing function such as a Gaussian of scale The drawback of the algorithm, and of eye detection in 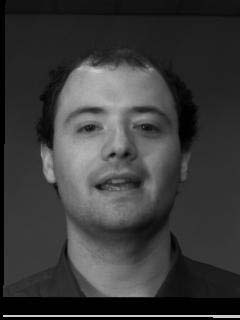 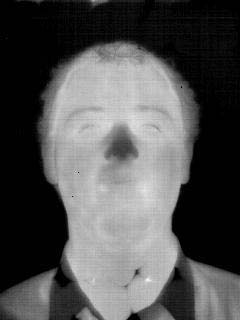 Experimental Results and Discus-
set. These are images where the detected eye coordinates were at least 10 pixels away from the ground-truth location.
Since the images are geometrically normalized using the de- In order to validate our thermal eye detection algorithm, we tected eye locations, outliers can easily be detected by pass- performed two types of experiments. First we compared the ing the normalized image through a face/non-face classifier.
eye locations to those obtained manually on a set of images.
Also, note that the face detector yields expected eye loca- Then we used the eye locations to geometrically normal- tions, which can be used to validate the feasibility of finer ize the face images before applying two face recognition eye localization. Outliers amounted to 436 images (12%) algorithms: PCA with Mahalanobis angle distance and the in the visible domain and 79 images (2%) in the LWIR do- Equinox algorithm. We compared the recognition perfor- mance in visible and thermal infrared using eye detection Table 1 shows the mean absolute error and the standard deviation of the error in the x and y coordinates for the leftand right eye, for detection in the visible domain, while Ta-ble 2 shows the equivalent quantities for the LWIR domain.
Comparison to Ground Truth Data
While the number of outliers is much larger in the visible For this experiment we used 3732 images of 207 subjects than in LWIR, the means and standard deviations of the not wearing glasses, collected during several indoor ses- visible errors stay below 1 pixel2. The means of the ab- sions. We used the FBI mugshot standard light arrange- solute LWIR errors go up to 2.8 pixels, a 4.7 times increase ment. The subjects were volunteers, none of which was over visible, and the standard deviations go up to 1.75, a visibly agitated or perspiring (on their face, at least) during 1.77 times increase over visible. We have to keep in mind though that at the resolution of our images the average size We used an uncooled sensor capable of acquiring coreg- of an eye is 20 pixels wide by 15 pixels high. So although istered visible and longwave thermal infrared (LWIR) the error increase from visible to LWIR is large, LWIR val- video. The format consists of 240 × 320 pixel image pairs, ues still stay within 15% of the eye size, quite a reasonable coregistered to within 1/3 pixel, where the visible image bound. We will see below how this error increase affects (from a Pulnix 6701 camera, sensitive to approximately 0.9µ) has 8 bits of grayscale resolution and the LWIR has bits. The LWIR microbolometer (Indigo Merlin) is sen- sitive through the range 8µ-12µ, with a noise-equivalent- differential-temperature (NEdT) of 100mK. Thermal im- ages were radiometrically calibrated in order to compensate for non-uniformities in the microbolometer array. Figure 3shows sample images from this set.
Table 1: Means and standard deviations of visible eye de-tection errors Table 2: Means and standard deviations of IR eye detectionerrors Figure 3: Sample images used for ground truth data com-parison Face Recognition Performance
For each coregistered image pair, the locations of the left and right pupil were semi-automatically located by a human The imagery used for this experiment was collected dur- operator. These locations were used as ground truth.
ing eight separate day-long sessions spanning a two week After detecting the faces and eyes in both the visible and 2Obviously, removing the outliers reduces the standard deviation, so to thermal infrared images, we removed the outliers from our some extent the lower variance is due to the large number of outliers. 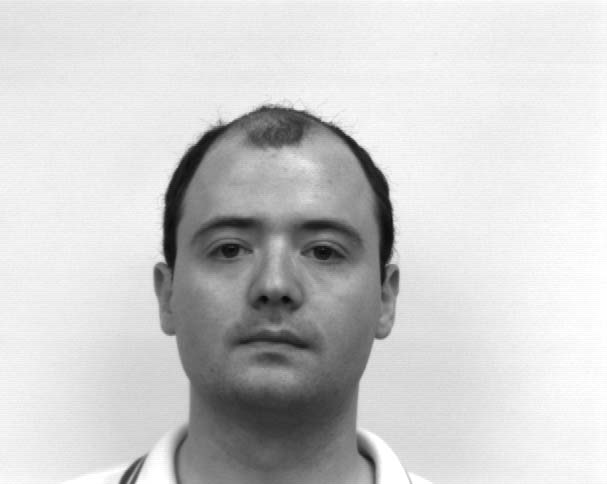 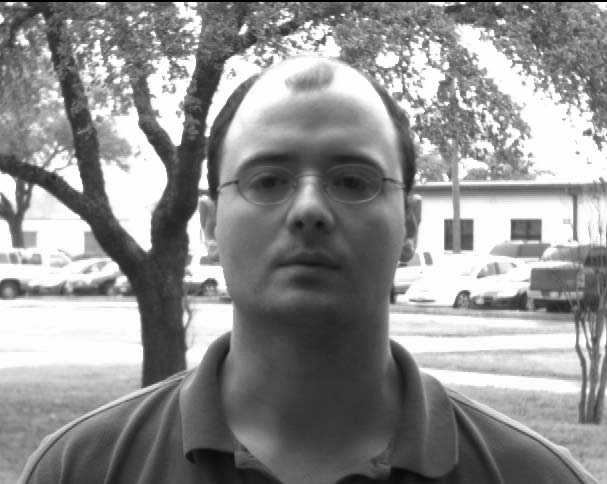 Jedburgh Three Peaks Ultra Marathon Sunday 27th October 2013 A big thanks to our sponsors: Scottish Borders Brewery Jordanhill Garden Supplies Registration and Start: 07:00 - 07:45: Registration and kit check in Jed Thistle Rugby Club which is at the side of Lothian Car park. Address is Abbey Bridge End, just off the A68, postcode TD8 6JQ. Cars can be parked here