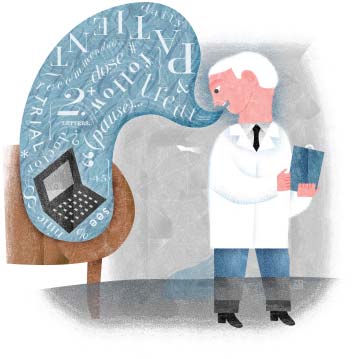 transcription will streamline productivity and allow Project at IBM’s Yorktown, N.Y., research facility is devel- restructuring of costs, L’Heureux explains. “We were at a oping ways to combine speech recognition with visual cost of about 21 cents per virtual line. We think that with data, such as lip and mouth formations, and maybe even all the [process] changes we’re making, we can get it to about with emotional emphasis, notes IBM’s Garr. The compa- ny also is working on ways to combine multiple meth-ods of sending and receiving data, including a combination of VoiceXML and XHTML, he explains. This might mean One of the most annoying chores for speech recognition requesting information verbally but viewing the results users is having to say punctuation cues aloud. Scansoft’s in text, or vice versa. “Speech is evolving to be in many DNS 7 contains an optional “natural-punctuation” fea- places. It’s not just going to be on a desktop or on a ture, which uses probability and length of pauses to pro- server. It’ll be in everything you do,” Garr says.
vide punctuation automatically. For example, if a sentencebegins with “why,” chances are it’ll end in a question mark. Revis admits that the new feature is still rough Jacobi Medical has been busy trying to see that everyone around the edges, but it can help users who tend to repeat can be heard. As of May, speech was an input option for histories and admission notes in the adult primary care Today’s systems include sophisticated context engines clinic, the women’s health facility, the pediatric outpatient capable of discerning between similar-sounding words and center, sports medicine and the urology clinic. Morreale’s phrases based on the other words in the sentence. Part of next targets are cardiology and perhaps OB/GYN. His goal this is built-in and part is learned—the system keeps track is to provide speech as an input option anywhere docu- of which words are most often found together and makes ments are created in hopes that users will choose to talk increasingly intelligent guesses at the correct word.
But this is tricky stuff. For accuracy in a patient note, “But I have to mitigate the cost, because it’s not for example, the system must be able to discern the cheap,” Morreale says. “I have to provide a robust work- difference between a physician saying, “take a leave” station, special mikes and software licenses, and the train- (a rest period) and “take Aleve” (the Bayer drug). ing, maintenance and support. I have to move forward Voicebrook’s Cipriani says speech recognition systems somewhat cautiously, but it’s a good position to be in.” perform best when users train themselves to speak He adds: “I know that my bandwidth needs are going to logically and consistently—and to provide the crucial grow exponentially, especially with more voice recogni- keyword context. If physicians get used to saying “take tion and imaging going back and forth.” a leave of absence” and “take Aleve tablets,” the system Since speech recognition can make documentation will quickly learn to associate the proper choice with the available to the enterprise so rapidly, some wonder if it will eventually become linked to best practices and physi- For anything that falls through the cracks, most cian expectations. “We have small examples with that here desktop systems allow users to create a macro, forcing already,” Morreale says. “We process most of our lab the system to choose a specific word. In that case, results within an hour. People are used to that, and they’ll saying “macro Aleve” will limit the system to a single complain if their results are taking too long.” Someday speech recognition systems might be inter- Pamela Tabar is a freelance technology writer based in preting more than our voices. The Superhuman Speech Healthcare Informatics

Damaged Brains A Warning for Mental Health Professionals Peter Wilberg HEALTH WARNING: your clients’ symptoms may be effects of the legally prescribed drugs that are or have been used to ‘treat’ them. Recent decades have seen an enormous rise in the number of people treated with psychopharmaceutical medications - all of which have a direct effect on brain functioning. Such medications includ