E. cut her dose from twenty milligrams to ten, then five.
Still she got zaps1 that ran from her heel to her tailbone, and up her elbow to her armpit,and alongside her spine. Turning her head made them flit across her shoulders.
Like a whack on the funny bone, she said to K.
She had nausea, at night, when she lay down and stretched her arms to still the bed.2She got up at six, when the turning of her stomach grew urgent and she bumped walls to the toilet, which she spattered with loose stool. She would scrub the bowl, but only aftera piece of toast and coffee and starting the laundry and straightening the kitchen.
Her brain took time to understand what her fingers touched or her eyes saw.
I don’t want to be on it forever, she told Dr. XXXXXXX, who agreed, but said If intolerable symptoms occur following a decrease in the dose or upon discontinuation of treatment, then resuming the previously prescribed dose may be considered (see DOSAGE AND ADMINISTRATION).
I don’t want to take it forever, E. said to K., who turned to watch a boy pause, and bend,and tie his shoe. K. thought the boy was nineteen or twenty. He was too thin. He 1 What are “The Zaps”? The zaps are little shock-like sensations, which occur during Paxil withdrawal. They can
happen with head and eye movement, or even while sitting perfectly still. After a while, you can begin to hear the
zaps happening in your head – like a ‘swoosh’ sound. <http://paxil.bizland.com/jbuzzw.htm>
2 Patients who stop taking Paxil abruptly often experience dizziness, nausea, diarrhea, and vertigo. Therefore, slowtapering is recommended. <http://www.nami.org/Template.cfm?Section=About_Medications&template=/ContentManagement/ContentDisplay.cfm&ContentID=7394 walked to the counter to order a Mocha Valencia. K. liked the hoops that ran one twothree four five up his earlobe. She thought she saw two more outlined in the fabric of hisshirt, at his nipples. She touched her hand to her nose and imagined sour sheets.
She wanted to tease him. Who orders a Mocha Valencia. Why stop, K. said. If it helps.
E. opened her mouth. She took 40 mg of Lipitor® to lower her cholesterol. She tookXanax® before meetings. She took Advil® for cramps and Tylenol® for headaches.
She carried Prevacid® in her purse—in case of red sauce. She took the pill because L.
couldn’t come in a rubber and Claritin® during ragweed months.
The long-term side effects3, she said.
Oh, K. said, who took too many pills, too. But she got up three, four times a night tocomfort T. and J. She couldn’t walk to the bathroom without kicking piles of laundry.
She hadn’t been to a movie in two years. She needed Zoloft®. Without Zoloft, she’dstab R.4 to death.5 3 It must be conceded that we do not yet know the long-term effects of Paxil or related agents (called SSRIs, andinclude Prozac® and Zoloft), if by long-term, you mean, "after 10 or more years of use." These agents are still too"new" to generate that kind of data. <http://www.mhsource.com/expert/exp1081996a.html> 4 R. took Paxil and couldn’t hold more than two things in his mind at a time_ and left details of family life to K., asif she wore curlers and spent days home folding laundry and cooking roast beef. She worked. They werevegetarian.
_ What are the possible side effects of Paxil? • Nervous System: Central Nervous System stimulation, concentration impaired.
<http://www.onlinelawyersource.com/paxil/faq.html> Question Posted By: kristine on Sunday, June 18, 2000 I have been taking 50 mg. of Zoloft for two years now to treat mild depression and social anxiety. Since I've been taking Zoloft, I don't seem to "feel"my feelings anymore. Like anger. Or if I'm experiencing a sad situation, it registers that "I am sad" or "this is sad", but I don't feel the actual sadnessthat I used to prior to Zoloft. In fact, I can't even cry (and I used to enjoy a good cry now and then). Is this normal for Zoloft?<http://www.medhelp.org/forums/mentalhealth/messages/31088a.html> 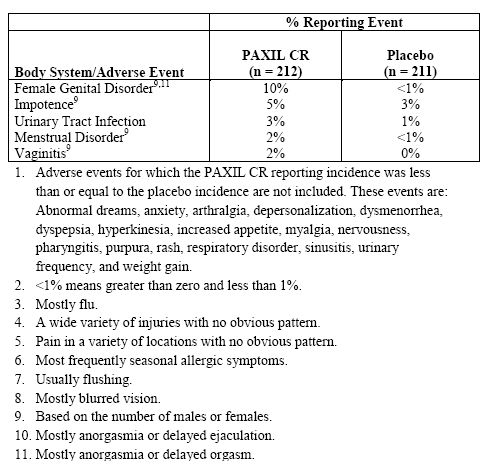